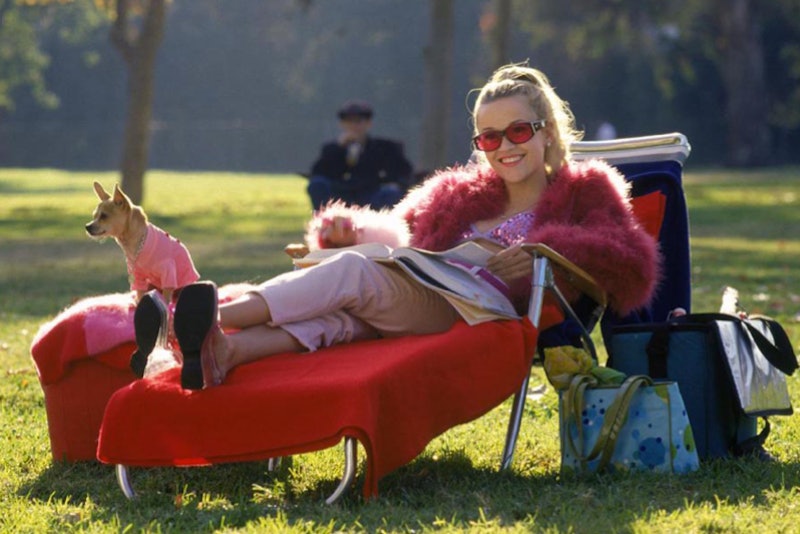 It has been over 12 years since Legally Blonde came out. Yeah. Let that sink in. You're old, time is fleeting, mortality, etc. The point here is that we should talk about Legally Blonde way more than we do. In fact, Legally Blonde — along with its heroine, the pitch-perfect Elle Woods — should go down in history as one of the greatest moments ever in feminist pop culture.

One thing that it's important to remember about Legally Blonde is that it's not a romantic comedy — at least not in the way we've come to know romantic comedies. Sure, Elle's journey at the beginning is triggered by her quest for a husband. And yes, she ends up with a guy in the end, but Elle Woods' story is not about Emmett, or about Warner. That she ends up with a good dude at the end of the movie is a side note.

This movie isn't about dudes or romance, it's about one incredibly intelligent young woman coming into her own and realizing her true potential.

So, here are some our very favorite feminist things about Elle Woods:

She's never been afraid to school people who underestimate her intelligence

Tons of people told her she couldn't get into Harvard Law, and she proved them wrong

And she did it through hard work, perseverance, and creativity.

And girl did pretty damn well on her LSATS.

Once there, she started to realize there were more important things in life than chasing after boys

And that those other things were more interesting anyway.

And she didn't just go as a Playboy Bunny for Halloween, she went as Gloria Freaking Steinem, historical feminist icon

She's mocked for it, but she never gives up her femininity when it's looked down upon as weakness

She also never judges the other characters in the movie who don't choose to express themselves through traditionally feminine avenues.

And come on, people still reference that "bend and snap" scene.

(This movie more than passes the Bechdel test, by the way, many of Elle's conversations with other women are about law and other aspects of her intellectual life.)

Even if her jargon for doing so is a little dated.

Her professor sexually harasses her, and she immediately rejects him and then rallies

Because she's had the respect of the professor who really mattered all along:

So of course she rallies.

Oh and she catches a freaking murderer

Saving an innocent women from going to jail for the rest of her life is pretty badass, IMHO.

Meanwhile, we're still laughing at this

Long live Elle Woods. May she be our nation's pinkest congresswoman someday.