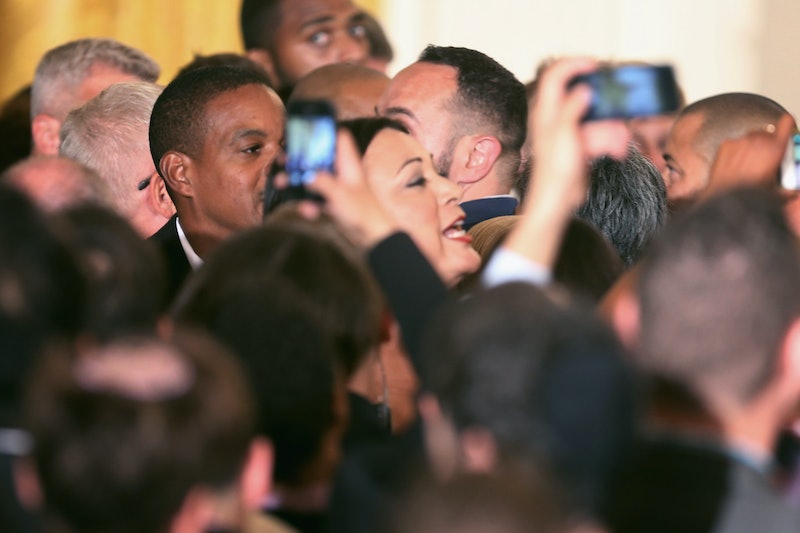 On Wednesday, a transgender Latina undocumented immigrant named Jennicet Gutiérrez interrupted President Obama during a reception commemorating Pride Month to call for an end to the deportations of LGBTQ undocumented immigrants. At the reception, Obama was delivering a speech to congratulate a group of LGBTQ leaders from around the country on the progress they have made when Gutiérrez spoke up, asking Obama to release LGBTQ immigrants from detention and to stop all deportations.

But unlike past heckling "incidents" — like the time in November 2013 when Obama told several immigration reform activists that they could stay after they challenged him at an event — Obama mocked Gutiérrez, telling her that "this is my house" and asking Secret Service to escort her out of the room. And shockingly, the room full of LGBTQ leaders sided not with the LGBTQ activist who was trying to raise awareness for a serious issue, but with Obama, who went on to say, “Shame on you, you shouldn’t be doing this."

Following the event, Gutiérrez released a statement entitled, "I interrupted Obama because we need to be heard." In her statement, Gutiérrez addressed the increased rates of violence faced by immigrant trans women. She explained that she interrupted Obama to demand the release of the estimated 75 transgender immigrants in detention right now. "... While [President Obama] spoke of ‘trans women of color being targeted,’ his administration holds LGBTQ and trans immigrants in detention," Gutiérrez wrote. "I spoke out because our issues and struggles can no longer be ignored."

"There is no pride in how LGBTQ immigrants are treated in this country and there can be no celebration with an administration that has the ability to keep us detained and in danger or release us to freedom," she added.

Gutiérrez works with Not1More and GetEQUAL and is a founding member of Familia: Trans Queer Liberation Movement, an LGBTQ immigrant advocacy group. But why did she receive the reaction she did when she spoke up? Why did the president use her remarks to make a joke about hecklers consuming "hors d'oeuvres" and "booze" in his house?

In a room designed to be a safe space for LGBTQ leaders and activists, the calls of a transgender Latina activist were drowned out by cheers of "OBAMA! OBAMA!" A public that celebrates Laverne Cox and Caitlyn Jenner booed a woman who has taken to the streets to bring national attention to the issue of detention centers. If the reception was designed to celebrate the progress made by the modern LGBTQ movement, then it does not make sense to escort someone so dedicated to the movement out of the room. Because Gutiérrez is right — trans women of color face disproportional amounts of violence, and an undocumented immigrant status only increases their chances of being targeted.

The explanation lies in part with the question of visibility. Transgender people are becoming more visible in the media, but Transgender Law Center Executive Director Kris Hayashi was right in saying that visibility is not enough. We celebrate Cox and Jenner in the public sphere because, as Cox wrote, they have access to certain privileges that many trans people do not. It is these privileges that cause many people to cheer for Cox when she says that #TransIsBeautiful and jeer at Gutiérrez when she calls for an end to violence. Cox has made leaps and bounds when it comes to the public representation of trans women of color, but she is the first to acknowledge that neither she nor Jenner speak for all trans people; Gutiérrez's reception at the White House is proof of that.

The other part of the explanation has to do with who was at the event. Take a look at the video, and note the ratio of white men to everyone else. The marginalization of trans women of color in particular has always accompanied the modern LGBTQ movement; it has been happening ever since trans activist Sylvia Rivera was kicked out of the Gay Activists Alliance, which wanted to present a more normalized movement. For many people, including the president, LGBTQ advocacy often stops at gay marriage, and the issue of how other identity axes like race, class, immigration status and so on inform the modern LGBTQ movement often goes ignored.

Maybe she could have waited until the end of the speech — but why would she, when Obama was talking about trans women of color facing violence, even as undocumented trans women continue to be raped, harassed, and deported?

"Obama’s argument seems to be that if you’re invited to a party, it’s only polite not to criticize the host; I try to follow this rule myself," transgender writer Meredith Talusan wrote in The Guardian. "But when the host is in charge of a system that leads to members of a community he’s supposed to be celebrating being routinely abused and assaulted, and he has so far taken little action to address it, then breaking this rule is justified."

Gutiérrez may have interrupted Obama, but she is an activist — not a heckler — and it was not appropriate for Obama to make jokes at her expense, especially when she was trying to raise awareness for people in her community who are being oppressed and killed. But what is perhaps more appalling is that even now, more than 40 years after Stonewall, a room full of so-called LGBTQ leaders would distance themselves from someone like Gutiérrez.

More like this
The Church Of Scotland Votes To Allow Same-Sex Marriages
By Sam Ramsden
How To Support Gun Control Reform Right Now
By Morgan Brinlee and Carolyn Steber
What Is Barack Obama’s Net Worth? He Makes *Way* More Now As An Ex-President
By Hugh McIntyre
How The City Healed Five Years On From The Manchester Arena Attack
By Ella Glover
Get Even More From Bustle — Sign Up For The Newsletter