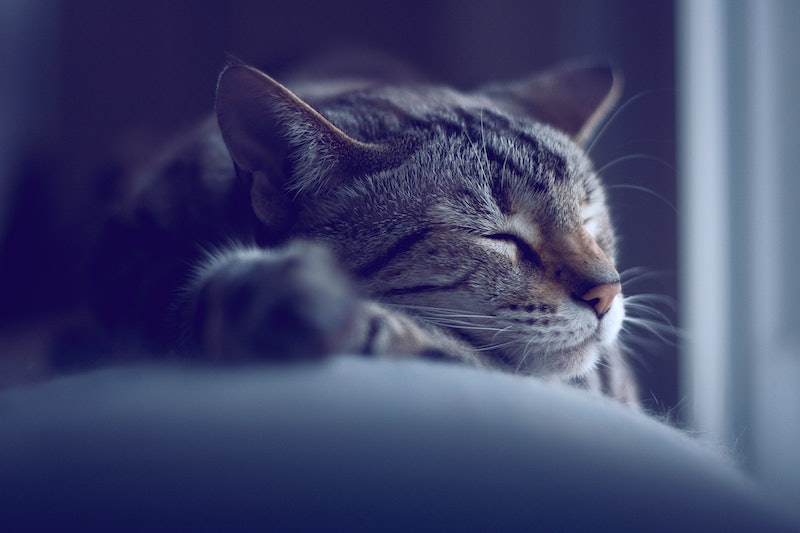 A near-constant state of sleep-deprivation is, I think, one of the hallmarks of being between the ages of 18 and 24. Between college, first jobs, and trying to live up this Thought Catalog list of crazy nightlife stories, there isn't much time left over for good, old-fashioned shut-eye. Not sleeping enough is a real problem — it can affect mood and productivity, and compromise your success at your job, in school, and in interpersonal relationships. Not sure if you're getting enough sleep? Check out this list of eight symptoms and see how many boxes you tick.

1. You're constantly hungry, and not for salad.

Sleep affects the body's production of the hormone grehlin, which is in charge of hunger and satiety. Too little sleep can lead to too much grehlin production which, in turn, not only makes you hungry, but makes you crave carbs and fats.

2. You can't find your keys. Or your glasses.

Forgetfulness is a symptom of sleep deprivation. Mind you, eight hours won't magically tell you where your keys are, but it might help you remember the next time you put them down.

Needing three cups of coffee to feel like a person instead of one is a sign of caffeine dependency, which means you may not be getting enough hours in the sack.

Lacking restful sleep means you don't have time to recharge your emotional batteries. Tired people can often be irritable and weepy. If you're more sensitive than usual, maybe try to get a few more hours of sleep instead of reaching for the Midol.

Loss of libido is another little-known effect of lack of sleep. Switch the usual order and try the nap before the sex.

6. You always wake up groggy.

This is actually an indicator both of too little and of too much sleep. If you constantly wake up feeling like you got hit by a bus, something's gotta give.

You can't focus, and you are starting to fall half-asleep if given the slightest provocation (like sitting in a car, or on the bus, or on the couch), but you can't seem to sleep at night. Hard as it may be, you need to hold off on napping and actually try to sleep at night.

When you're tired it's hard to fight off being sick. In fact, it usually makes you sicker. Sleep is even more important than chicken soup and O.J. when it comes to getting healthy.

More like this
The Spiritual Meaning Of Angel Number 000, Explained
By Kristine Fellizar
These 4 Signs Are The Sarcastic Jokesters Of The Zodiac
By Brittany Beringer
These 4 Zodiac Signs Will Be Extra Lucky In October
By Brittany Beringer
The 3 Most Family-Oriented Zodiac Signs, According To An Astrologer
By Nina Kahn
Get Even More From Bustle — Sign Up For The Newsletter