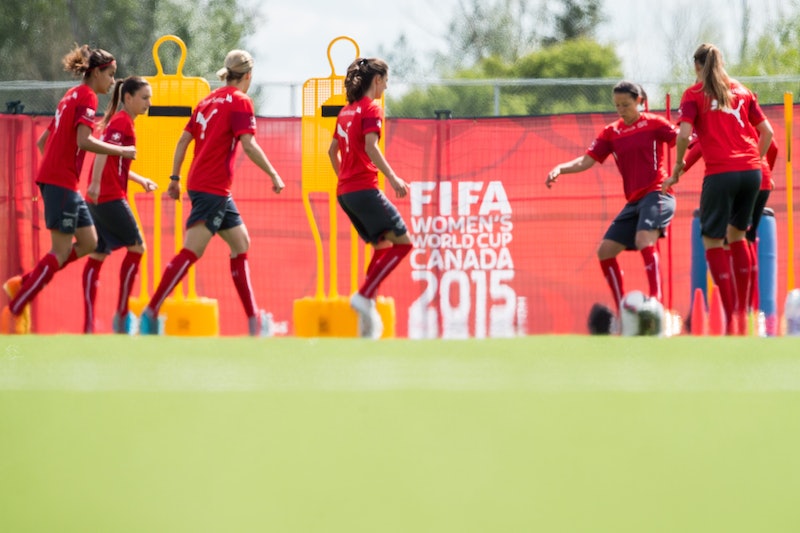 All of Canada's six Women's World Cup stadiums have artificial turf and athletes across the world have not been shy about vocalizing complaints. FIFA, soccer's international governing body, made the decision last year to forgo real grass and immediately faced accusations of gender discrimination, as stadiums of previous World Cup tournaments for male athletes have always been played on grass.

The Canadian Soccer Association took legal action against FIFA, but withdrew its charges when it became clear FIFA would not make changes. Nearly all outdoor Canadian stadiums are set with artificial turf instead of real grass due to the intensity of of the country's winters; BMO Field, a grass stadium in Toronto, is unavailable for the summer as the Pan American Games will be played there this summer.

There is no player in the world, male or female, who would prefer to play on artificial grass. There’s soccer on grass, and then there is soccer on turf.

Team USA's Sydney Leroux compared running on the artificial turf to running on cement, and in an interview with Vice Sports, Leroux said, "Between men and women… this is not equal." Leroux continued:

For us to be playing the biggest tournament for women’s soccer on artificial grass is unacceptable. The game is completely different. It’s fake. So you don’t know how it’s gonna bounce. You don’t know how the ball is gonna run. It’s terrible for your body. The constant pounding. You’re running pretty much on cement. … We’re the guinea pigs.

Other high-profile figures including actor Tom Hanks took to Twitter to lodge complaints about the use of artificial turf. However, one hard-hitting tweet on the issue came from the Los Angeles Lakers' Kobe Bryant, who also took to Twitter to point out the injustice of using artificial turf. Using the hashtag #ProtectTheAthlete, Bryant posted Leroux's photo which showed her appalling injuries from playing soccer on artificial turf, sparking a debate about whether playing on that kind of field causes more injuries than playing on grass.

FIFA was quick to argue that playing on artificial turf caused no more injuries than playing on real grass. In November 2014, FIFA defended its use by releasing statements from professionals backing the safety of playing on turf. In an interview with FIFA, Jan Ekstrand, a professor in Sports Medicine and the current vice-chairman of the UEFA Medical Committee said:

The total risk of injury is the same on football turf as it is on natural grass. We see the same result in all studies, there is no increase in injuries when playing on FIFA-certified football turf.

Each time a woman suffers a severe knee injury for instance, people start to blame the turf pitch, but it’s absolutely wrong, there's no scientific evidence for this.

However, a 2012 study from the American Journal of Sports Medicine found that knee injuries occur 40 percent more often on artificial turf instead of on grass. According to Jason Dragoo, the study's lead author and a professor at Stanford University School of Medicine, more and more universities are replacing the grass of their playing fields with turf for environmental purposes but are not considering whether that move is risky to a player's health. Dragoo's research team focused on the artificial turf's effects on the anterior cruciate ligament (ACL) for athletes at 10 percent of NCAA schools during the 2004 to 2009 seasons. The study found an injury rate of 318 injuries for every 100,000 practices, scrimmages, or games played, and athletes were more likely to be injured on turf than they were on grass.

Earlier this month, Vice Sports ran an article stating that injury risk on turf was a significant problem not only in the frequency of injuries, but in their severity. Regardless of whether playing on turf actually increases the probability of a player being injured, it certainly increases the seriousness of any injury suffered, as the plastic blades of the fake grass tend to "take a heavier toll in scrapes and bruises." A Penn State University study found temperatures on synthetic turf were 35 to 55 degrees Fahrenheit warmer than they are on grass fields. These high temperatures can be hard on soccer players' feet, and, according to Vice Sports, tire athletes out more.

Playing on turf has also been associated with long-term health risks, like 16 times the national risk rate of antibiotic-resistant staph infections, according to the Texas Department of State Health Services in 2007. The reason for this has yet to be discovered, as another Penn State study found that staph bacteria exist in equal amounts on grass fields. However, the rate of staph infections could possibly have something to do with the material the turf fields are made of, which include rubber tires that are supposed to be more environmentally friendly.

These rubber tires are composed largely by carcinogenic chemicals, which can be found in players' hair, mouths, and shoes by the end of a match. The chemicals that the turf is made of could be the cause of another long-term health risk: the increased rate of cancer among goalkeepers. Goalkeepers are consistently diving headfirst for balls and are thus exponentially more exposed to the turf. According to the University of Washington's Amy Griffin, goalkeepers are often diagnosed with lymphoma and leukemia, leading her to believe there is a common cause.

Unfortunately, the issue of both the frequency and severity of injuries is only one of several caused by artificial turf. Playing on artificial turf has been linked with less competitive play. Wambach attributed her lack of goals during a match against Sweden on the artificial ground. Watching Wambach closely, you notice her goal attempts came short because of a high bounce that turf is famous for causing.

The use of turf instead of grass could also be lowering morale among teams of the Women's World Cup. According to The Washington Post, the long history of sexism in soccer and all sports, really, could be affecting morale. The use of turf and not real grass for female soccer players is only a reflection of the sexism they have been forced to endure for years now. In 2012, Alex Morgan, FIFA's World Player of the Year, claimed the organization's former president, Sepp Blatter did not even recognize her.

In 2009, Blatter stated that artificial turf fields "are the future," regardless if they were used by men or women. This could indicate that Men's World Cup games may also soon be played on artificial turf, although the men's division plans to use grass at least through the 2022 tournament in Qatar. And to be fair, the 2019 Women's World Cup games in France will be played on grass.

But it's very possible that female players will be playing on turf again, and it's certainly worth noting that female soccer players, and not their male counterparts, were used as testers. Ultimately, nothing reflects the lack of respect paid to female soccer players better than photos of empty Women's World Cup stadiums. Through the use of artificial turf, this lack of respect is physically represented in the injuries and health risks female athletes are suffering from.

More like this
Watch Emma Raducanu’s Incredible Response To Her Early Wimbledon Exit
By El Hunt
The Nike & Jacquemus Collab May Have Been Inspired By Princess Diana
By Frances Stewart
7 Expert Tips For First-Time Pickleball Players
By Carolyn Steber
The 10 Best Longline Sports Bras, According To Reviewers
By Danielle Calma
Get Even More From Bustle — Sign Up For The Newsletter