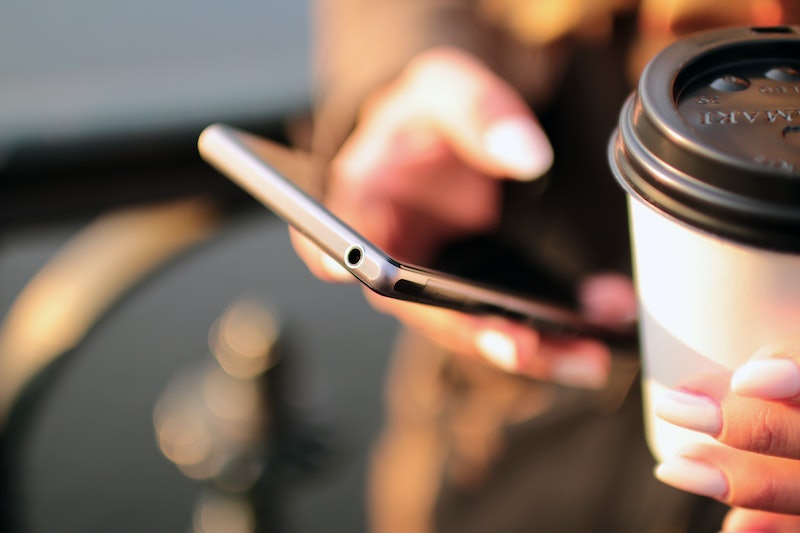 Ever heard of citizen science? It's the new big thing in scientific innovation. Citizen science uses the brainpower, resources, and devices of ordinary citizens (like us!) to help gather data, solve scientific problems, raise awareness, and generally Do Scientific Good. And the best part? You can participate even if you failed 10th grade Biology.

Citizen science projects have proliferated across the web, with places like Zooniverse giving a huge choice of projects you can contribute to — from helping NASA track meteors to identifying plankton. As if this weren't cool enough, now there are a bunch of citizen science apps that mean your smartphone can become a science hub, too.

Some apps don't require you to do anything at all, and most of them just ask you to do easy, fun stuff, like peering at photographs or snapping any orchids you happen to see. It seems like a tiny contribution — but the scientific community has, cleverly, figured out that if they can get help from a huge amount of people, a little at a time, they'll be able to make big differences.

Whether your jam is space, nature, photography, or butterflies, this is the way to use your smartphone for good, not just for selfies.

If you're handy with a smartphone camera and love your animals, this is the app for you. Project Noah is a worldwide project to document the planet's biodiversity by crowdsourcing photos of animals and plants in your local area — even if you don't know what they are.

How does it work? You just snap a picture, upload it to the app, and either identify it yourself or ask for help. Plus, you might be given missions to seek out specific things in your neighborhood for particular scientific studies. Moss-spotting: go!

Noisetube turns your smartphone into a device that measures noise levels in your neighborhood. It's part of something called "noise mapping," which measures noise pollution across the world and helps us understand how it might affect things like wildlife or human behavior.

How does it work? The app does all the work for you. It measures noise around you, and then gives you measurements and location data to enter into Noisetube's own website to join the mapping. It's pretty low-key, but seriously helpful: measuring noise levels across the world is extremely useful because too much noise has been shown to affect human health and concentration.

Developed by Samsung in collaboration with the University of Vienna, Power Sleep is the ultimate in lazy contributions to world knowledge — because you don't have to do a damn thing except plug in your phone and go to sleep. And while you're snoozing, it decrypts protein sequences from halfway across the world. Rather than building a giant supercomputer to do the number-crunching, it's using the little computers in phones all over the world to do the work instead. Much cheaper.

How does it work? Overnight, with your phone plugged in, Power Sleep downloads a data bundle and calculates it, stopping once your alarm rings in the morning. Hey presto, science is done. Do be careful about your data charges with your phone company, though.

Can't be bothered to do anything that even looks like work? How about a game that helps cure cancer? Genes In Space was developed by Cancer Research UK to help them analyze genetic data — by asking users to play a space-themed obstacle course game. Cancer researchers have huge amounts of genetic data to wade through in pursuit of patterns or anomalies that might help find a cancer cure, and doing it on their own would take a very long time. So they've found a way for us to help — without needing a science degree.

How does it work? The gameplay is just like an ordinary iPhone game that doesn't save the world. You navigate an obstacle course that's actually a huge set of scientific data, collecting a valuable element called Element Alpha and plotting a route that will be used by scientists in the "real world."

Biodiversity is important — and identifying the spread of invasive species is crucial to it. What's Invasive is a fun little app that lets you know what invasive species in your local area look like — and if you spot them, gives you the ability to alert the experts. You're a citizen on patrol against environmental nasties.

How does it work? It's part guide to what you should look for, part information collector. If you do see something that seems suspicious, snap a pic and it'll send it, as well as a GPS location, to experts who can then map the spread of the problem across your area. Invasive species are serious problems for local animals and plants, and could upset the whole food chain of your neighborhood.

Crayfis is still in development, but it's so cool I had to include it. The proposal? Using your smartphone as a detector for cosmic rays coming to Earth from space. The astrophysicists behind Crayfis are signing up smartphone users worldwide to contribute their devices for examining showers of invisible cosmic ray particles as they hit our planet.

We need to examine and map the showers to understand what the hell cosmic rays are actually doing. They're kind of a mystery, and more information about their presence in the Earth's atmosphere could help astrophysicists figure out how they function — and understand more about the universe.

How does it work? Smartphone cameras these day are sophisticated enough to pick up the cosmic ray particles in a photograph, because of their inbuilt sensors. The Crayfis app's going to operate a bit like Power Sleep: while you're asleep and it's plugged in, it'll measure the cosmic ray particles in the area and send the info off to astrophysicists for measurement. Space — on your phone. The mind boggles.