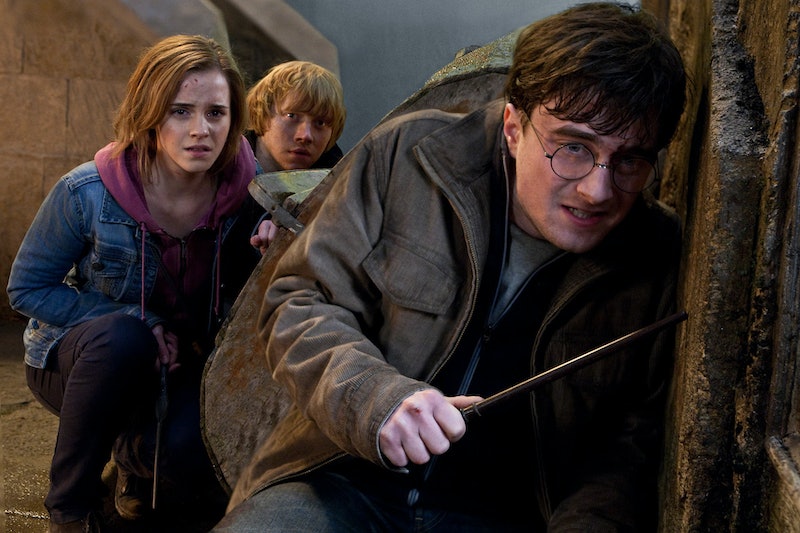 Oh, my God, you guys, I'm crying. No, wait, I'm screaming. I'm in a glass case of emotion. On Friday, J.K. Rowling revealed that she has written a new Harry Potter story as a play that will be opening in London's West End. The production, which is called Harry Potter and the Cursed Child , is not a prequel to the Harry Potter series, but instead a tale set at some unknown point in Harry's journey that tells a new story none of us have ever been privy to before. We've all been begging for Rowling to continue the magical world of Harry Potter pretty much since the final page of the final book, and it seems that she's finally heard our pleas. It might be more expensive than a book — BRB, already planning my flight to London — but, considering it's JKR, I'm willing to bet it's worth every penny.

So what do we know about Harry Potter and the Cursed Child? Well, basically nothing, except that it isn't a prequel and that Rowling has a good reason for not making it a book. According to her Twitter, "I am confident that when audiences see the play, they will agree that it was the only proper medium for the story." Beyond that, she doesn't want to reveal too much more at the risk of spoiling it for fans. I think this is one case in which I would be totally fine with spoilers, don't you?

So the question that will now be on everyone's minds is obvious: what is Harry Potter and the Cursed Child about? What untold part of Harry's story does this new play fit into? Who is the Cursed Child? (I'm getting Half-Blood Prince flashbacks like whoa, you guys, let the theorizing begin.) This is a mystery that will be plaguing fans until Rowling takes mercy on us, or until opening night in 2016, and I just can't wait that long. I have a few theories myself, so let's break this down.

1. The Cursed Child Is Dudley Dursley

OK, so Dudley isn't the most sympathetic character in the world, but you can't deny that his post-Harry-Potter-becoming-a-wizard life was one trauma after another. From growing a pig tail and having to go to the hospital to have it removed to being attacked by Dementors and having to be saved by Harry, Dudley's life became the exact kind of hell that he turned Harry's life into. While that could be considered just desserts, it's hard to deny the fact that he could definitely be considered a Cursed Child — especially since his personality was very much the product of his two incredibly unpleasant parents.

The only member of the Diggory family that we get to meet, aside from the future Edward Cullen, is Amos Diggory. However, who's to say that Cedric was an only child? Maybe he had a younger brother or sister that Harry just didn't get a chance to meet during the series. Maybe he has a half-sibling out there in the world somewhere, or his parents had another child after his death — and growing up in the shadow of a dead boy who was treated like a practical saint and symbol by the rest of the wizarding world can't make for a very easy existence.

3. The Cursed Child Is Teddy Lupin

Teddy Lupin was born a few months before both his parents died, and then grew up during what is likely to be considered the Reconstruction Era of the Wizarding World. You know, that time where everyone had to help rebuild all that Voldemort destroyed, and find a way to live with each other after all the horrors committed on both sides of the conflict? Yeah. Talked about cursed.

4. The Cursed Child Is James Potter II Or Albus Potter

What if it wasn't all smooth sailing for the Potter family after Harry and Ginny got married and started having children? What if James Potter grew all that swag later in life, and his early years were marked with some sort of tragedy? What if Albus Potter was born with some kind of curse on him, or was cursed by a militant wizard later on, and that's what makes him so hesitant and afraid to be in Slytherin in the epilogue? Heck, what if Lily Potter is the one with the curse?

5. The Cursed Child Is From Wool's Orphange

Wool's Orphange is the name that the Harry Potter films gave to the orphanage where Tom Riddle (aka Voldemort) grew up, and, boy, did he have a memorable time there. Two of the orphans, Amy Benson and Dennis Bishop, made the mistake of going into a cave with Tom, where they witnessed something so horrific that neither of them ever wanted to speak of it again. Billy Stubbs had to see his rabbit hung from the rafters the day after he and Tom had a fight. Any one of those kids who grew up along the future Dark Lord would be considered a Cursed Child.

6. The Cursed Child Is Hermione Granger

Of all the members of the Trio, Hermione Granger is the only one whose backstory we didn't really delve into as much. We don't even know the names of her parents! Maybe Harry Potter and the Cursed Child finally explores the history of everyone's favorite feminist icon. Considering how hard she tried to prove herself, and how it was obvious she had no real friends before Harry and Ron, perhaps Hermione has gone her whole life being too clever for the people around her to truly like her, feeling completely different and isolated, and never knowing why...

7. The Cursed Child Is A New Character

I have my fingers crossed that the Cursed Child is actually Salazar Slytherin, and Harry somehow finds a way to delve into the past to follow his childhood (maybe someone finds a really old Pensieve). Aside from the Marauders, the Founders are the people I'm most curious about. However, it's quite likely that the Cursed Child is someone who was never formally introduced in the book series, making all these theories pointless. Is it 2016 yet? The wait is already killing me!