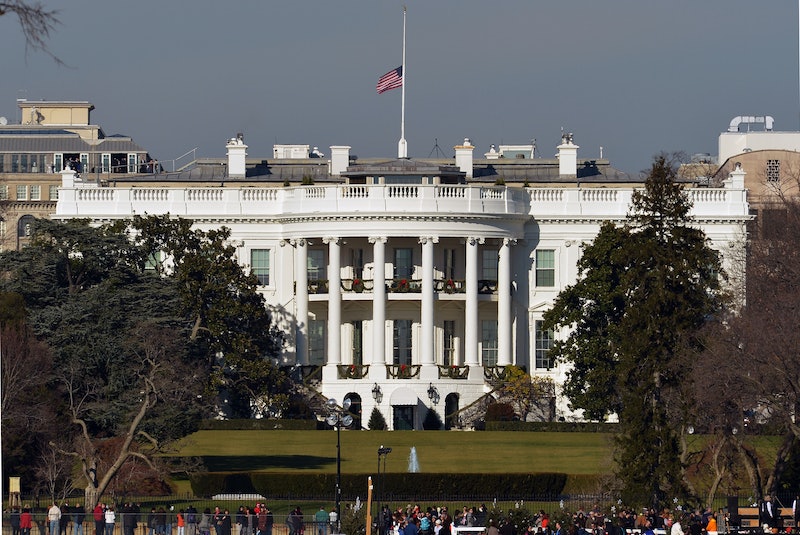 As if the end of the week isn't enough of a happy occasion, turns out there's much more to celebrate this Friday. After the Supreme Court ruled bans on gay marriage unconstitutional, all 50 states must now allow same-sex couples to wed. It's a landmark 5-4 decision (sorry you're having a bad day, Justice Antonin Scalia, but we're not going to let you rain on our parade) that comes after the Supreme Court heard Obergefell v. Hodges , a case regarding four states that would not allow same-sex marriages in their borders, or recognize same-sex marriages outside their borders. And for anyone wondering what the White House thinks about the gay marriage ruling, it's safe to say it's as satisfied as Justice Ruth Bader Ginsburg in a glove store. Because not only has President Obama spoken out in favor of the Supreme Court's decision, but the White House's Twitter avatar after the gay marriage ruling shows everyone at 1600 Pennsylvania Avenue is celebrating.

Just minutes after Justice Anthony Kennedy delivered his opinion in favor of same-sex marriage, the White House uploaded a new avatar to its Twitter feed that clearly supports the ban of the bans. Just see the feed's colorful homage to the ruling below:

The avatar change comes after the account re-tweeted inspirational words from President Obama, who wrote on his own personal Twitter feed:

Today is a big step in our march toward equality. Gay and lesbian couples now have the right to marry, just like anyone else. #Live Wins

And Vice President Joe Biden, who wrote on his feed:

All marriages at their root are about love. In America, our laws now recognize that simple truth. #LoveWins today & we couldn't be prouder.

And the White House weighed in itself, with a GIF prepared for this very occasion.

And to celebrate the decision in your own rainbow-hued way, here's a delicious tutorial: