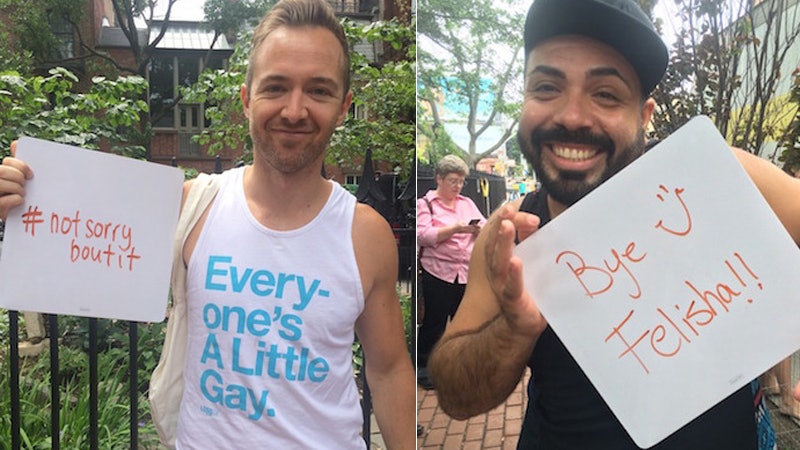 Just a few hours after the Supreme Court's landmark ruling legalizing gay marriage nationwide on Friday, it was surprisingly quiet outside New York City's historic Stonewall Inn. The Greenwich Village bar — where a 1969 police raid led to the Stonewall Riots and the birth of the modern LGBT rights movement — was of course a natural place for people to gather to celebrate the momentous decision. A group of at least 100 were waiting outside the historic landmark, and while there were a few cheers, there was no booze or dancing in sight (yet) — just a number of calm, almost serene smiles.

The crowd might have been waiting for the bar to open, but today, the waiting for marriage equality finally ended: after hearing the case Obergefell v. Hodges at the end of April, the Supreme Court ruled that gay marriage is a constitutional right in all 50 states. But it very nearly didn't happen: while Justices Anthony Kennedy, Ruth Bader Ginsburg, Stephen Breyer, Sonia Sotomayor, and Elena Kagan voted in favor of marriage equality, everybody's favorite dinosaurs — Justices Antonin Scalia, Clarence Thomas, Samuel Alito, and John Roberts — made up the four dissenters.

While today certainly isn't a day for anger or hate, we did want to give those gathered outside Stonewall a chance to express what they would say to the dissenting judges if they had the opportunity. (After all, Scalia and company had their chance to say their piece, right?). Here are our 37 favorite answers:

"No wedding cake for you!"

"Come into the new world."

"How does it feel to be the minority?!"

"I'm going to let you think about sitting your own child down & telling them they don't deserve the same rights as you."

"You cannot stop love, you should embrace it."