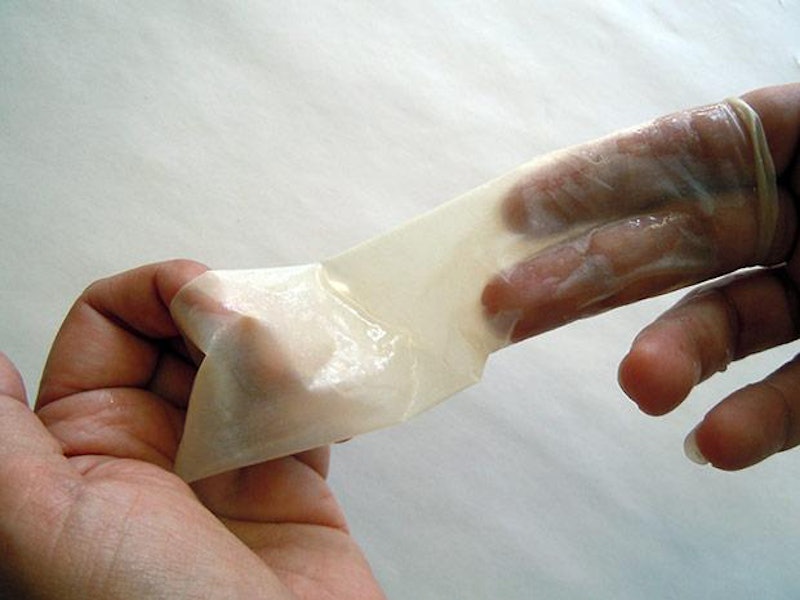 On Wednesday, the Bill & Melinda Gates Foundation announced that it’ll be giving $1 million in grants to encourage the design of a new condom: one that retains the standard latex sheath’s efficacy but doesn’t feel, to quote a member of the foundation, "like taking a shower with a raincoat on." Grantees have come up with a number of novel ideas, including “shape-memory” material that molds to the contours of the penis (temporarily, of course), and a quicker application method that strives to eliminate the whole fumbling-with-the-wrapper problem. One of the most striking new approaches is also, frankly, one of the most disgusting: A condom made of beef tendons.

Mark McGlothlin of Apex Medical Technologies looked into the possibility of using cow parts back in the 80s before ultimately settling on a polyurethane condom instead. It sounds like a gross idea, but collagen fibrils, a material found in cow tendons, is basically everything you’d want a condom material to be. It’s thin, strong, has a texture similar to that of a mucous membrane, and is good at transferring heat. It’s also cheap and easy to find: To test the idea, McGlothlin will be procuring beef from a Chinese food store in California. (We're guessing vegans would take issue though.)

The foundation announced the condom initiative earlier this year, and more than 500 applicants applied. As Bustle reported:

The goal of the contest is to address unplanned pregnancy and sexually transmitted diseases (condoms being the cheapest and most effective way to prevent both). When all seven continents are considered, only 5 percent of men deign to wear a rubber, which makes stats of 2.5 million HIV infections per year no less shocking, but more easily understood.

We wish McGlothlin, and all of the grantees, the best of luck, but we’re just a tad skeptical that consumers will flock to the opportunity to incorporate beef into their sex lives.