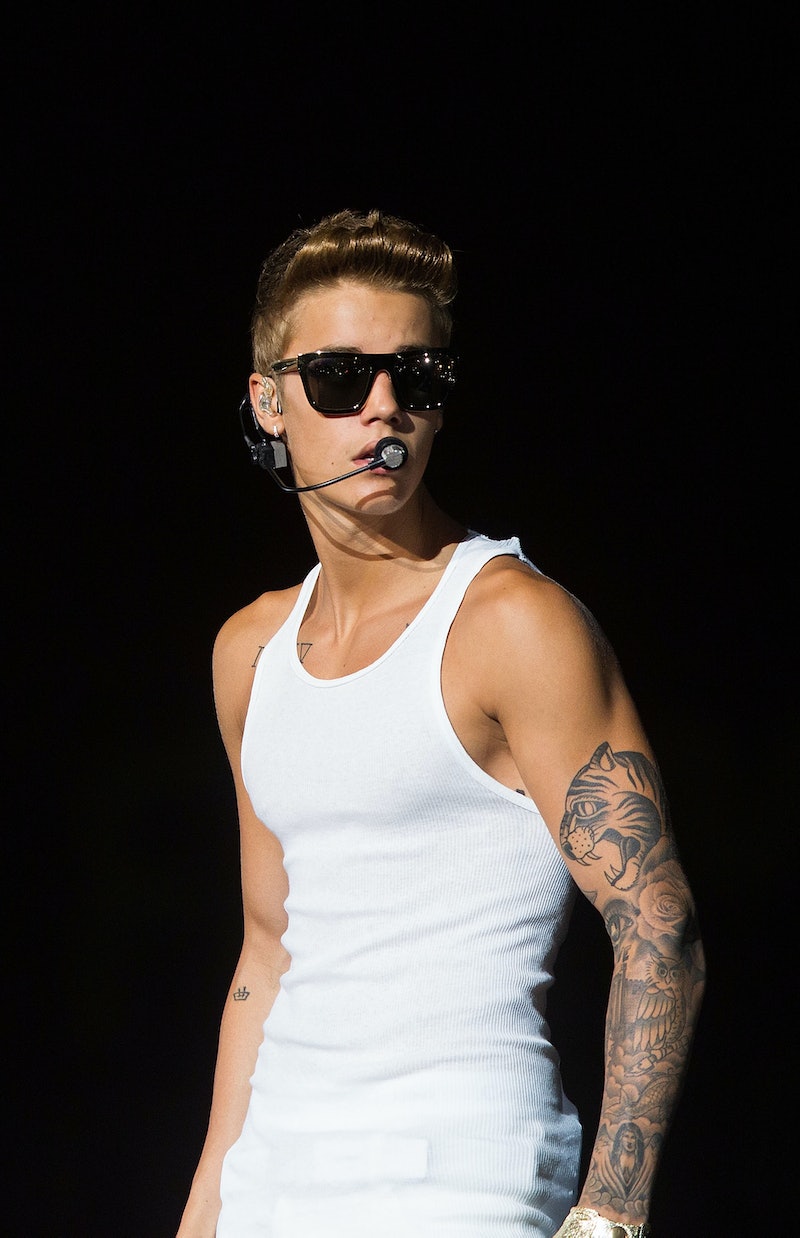 "Swag" is officially over, people. At least, according to Justin Bieber, it is. The 19 year-old Canadian performer sat down with The Hollywood Reporter and gave a revealing interview, that runs in the publication's current issue, where he talked his ex-favorite word, "not giving a f--k," and his weekly phone calls from Will Smith. The Biebs is growing up and that includes dropping the overused and excessively-repeated word "swag" from his vocabulary. Thank god.

I'm very influenced by black culture, but I don't think of it as black or white. It's not me trying to act or pose in a certain way. It's a lifestyle -- like a suaveness or a swag, per se. But I don't really like to say the word ['swag'] anymore. It's kind of played out.

But what will the singer-turned-graffiti-artist use as a buzzword now? Bieber's been dropping "swag" all over the place since before he released his Believe album in 2012. We won't say we're concerned (but we definitely are) about what word the Biebz will pluck from the English language or make up himself when he releases his new album. So here's 13 suggestions from yours truly to the singer that stole my heart with "One Less Lonely Girl".

"Togs" - It would be so like Bieber to want to prove how original he is and bring back the Victorian word for "a set of clothing". "Check out my new togs for tonight's show." He'd start a Victorian era revolution. (Kanye would totally catch onto this, 100%.)

"Fetch" - I mean, Gretchen tried to make it happen, maybe the Biebz will finally succeed. Lord knows the teenage youth of the world will run around screaming it after he uses it once.

"Quiche" - If "fetch" never getting cool feels too lame, Bieber can always start using "quiche" or the modern version of "fetch" (as told by HBO's Ja'mie: Private School Girl) that means "hotter than hot".

"Id-Gaf" - The phonetic pronunciation of "idgaf" or "I don't give a f--k" which seems like it's about to become Biebz' new favorite response to the media/his critics. I remember when I discovered cursing acronyms too, J.

"Ger" - The other half of the word it abbreviated, "swagger". Again, just because.

(Nothing would restore our faith in the Biebz more than if he could laugh at himself for using "swag" so often for so long.)

"Humble Pie" - Make it the title of a song, say it in an interview or on his social media — the first thing the Biebz could do it make a slogan for himself that's not conceited.

"Gostosa" or "Gos" - The Brazilian word for hot or our invented abbreviation. He's been spending a lot of time raising hell in South America lately, so he's probably picked up some slang.

"Turnt" - Not a new word, but no celeb has coined like Bieber coined "swag". He's not 21 yet, but rest assured when the witching hour arrives, he'll be in some club living up the definition of the word in all of its excess.

"Moss" - Bieber can follow up saying "id-gaf" with "moss" which nowadays doesn't mean the green, fuzzy stuff on trees and rocks but to "chill out".

"PYD" - Here's our acronym for 2014 and the title of the Biebz' new track with R&B legend R. Kelly. It literally means "put you down" in the most sexual way possible, you can bet that's going to be all over sexts for the next year or at least whispered people's ears at frat parties.

"Bossy" - According to his THR interview, Bieber can't remember a time when he was denied something he asked for. That sounds like the definition of "bossy" to me but maybe all of those things that he's asked for could be described as bossy — bossy kicks, bossy leather pants, bossy matte-black whip.

"Eesome" or "Ees" - Meaning "pleasing to the eye". Intelligent, original and basically just another way to say, "Look at how great my new ______ is/are."

Congratulations on growing out of "swag", Biebz. The world of language is your oyster, use that power wisely.

More like this
Selena Gomez Reacts To TikTok Users Who Say She Shaded Hailey Bieber
By Grace Wehniainen
Kourtney & Travis Crashed His Daughter’s TikTok Live In Their 2nd Wedding Outfits
By Grace Wehniainen
Stormi Just Walked A Red Carpet With Mommy Kylie Jenner & Daddy Travis Scott
By Hugh McIntyre
Twitter Is Upset About The 'American Idol' Top 3 Results: "Who TF Is Voting?"
By Jake Viswanath
Get Even More From Bustle — Sign Up For The Newsletter