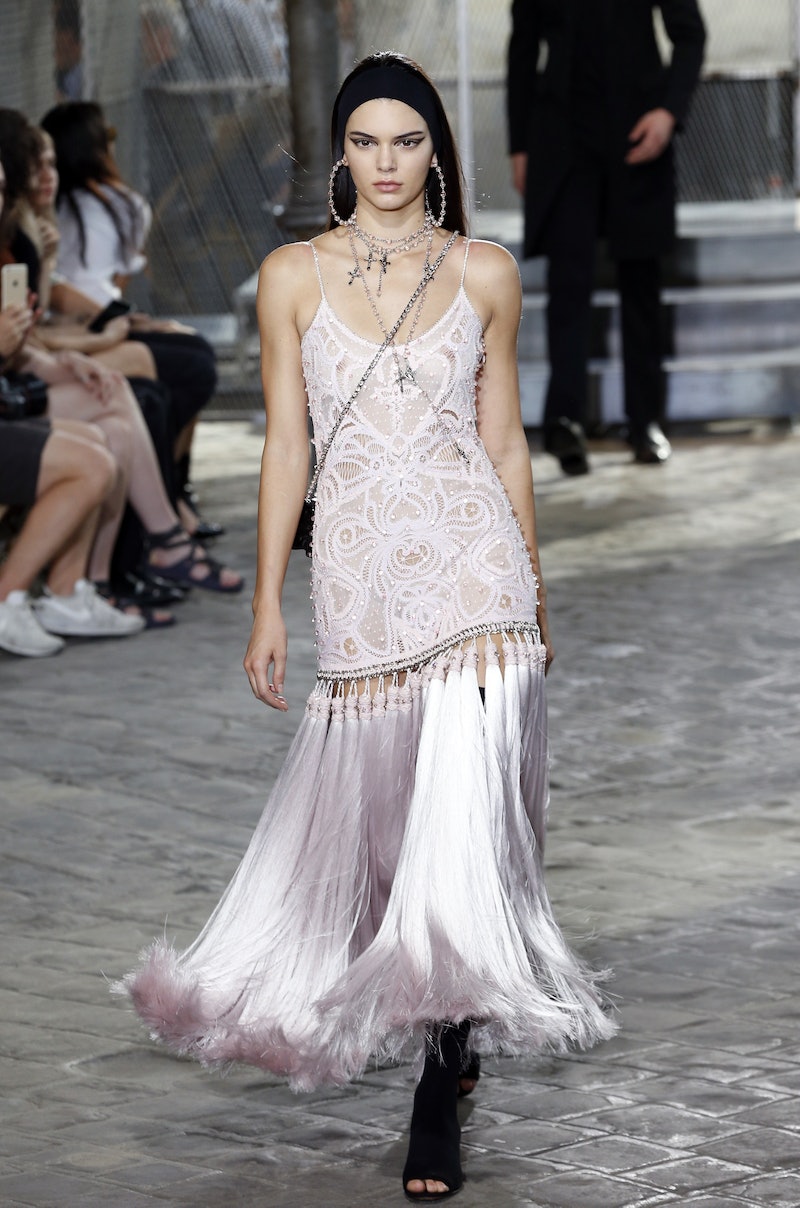 It might technically be Men's Fashion Week, but creative director Riccardo Tisci timed the relaunch of Givenchy's Haute Couture label for Fall 2015 to sync up with his Menswear Spring 2016 presentation, and despite the contrast of season, gender, and occasion, it worked pretty seamlessly (I'll never stop punning).

Top models charged down the runway, with Kendall Jenner, Joan Smalls, and Candice Swanepoel stealing the spotlight in girlish lace dresses and flapper-inspired frocks. Naomi Campbell stunned in a black thong, a crystal-encrusted men's blazer, and a gigantic skeleton key necklace that took up her entire bra-less, shirt-less chest.

Like the Menswear/Haute Couture nature of the show itself, there were highs, and there were lows.

Highs: Candice Swanepoel donned one of the most perfect lace dresses in icy lilac, and the models' winged eyeliner looked like it was painted on by a Japanese ink-painting master.

Lows: In womenswear, hoop earrings and stretchy, black cloth headbands called to mind my misguided high school years. On the men, some of the looks seemed to be borrowed from inmates (an oversized navy v-neck t-shirt over a white crewneck t-shirt), nuns (the aforementioned inmate top was paired with a shapeless navy skirt), or toddlers.

Candice Swanepoel and Ms. Campbell, above, were clear hits, while a menswear look featuring a loose v-neck tee and a skirt was a miss.Tisci didn't skimp on religious iconography; rosaries were prominent accessories, Jesus' face was emblazoned across sweatshirts and men's skirts, and there was no shortage of crosses, either. But, there were plenty of potential instances of a cultural appropriation, which is something that fashion just can't seem to stay away from. Tisci's manifested in both the women's and men's collections, like checkered shirts worn around the waist for men, a thin mustache on a male model, and the hoops and rosaries worn by the women.

Icons weren't just relegated to sweatshirts or the runway. Showside, Carine Roitfeld borrowed Amber Rose's sunglasses to sit next to Courtney Love, who was also flanked by Hamish Bowles.