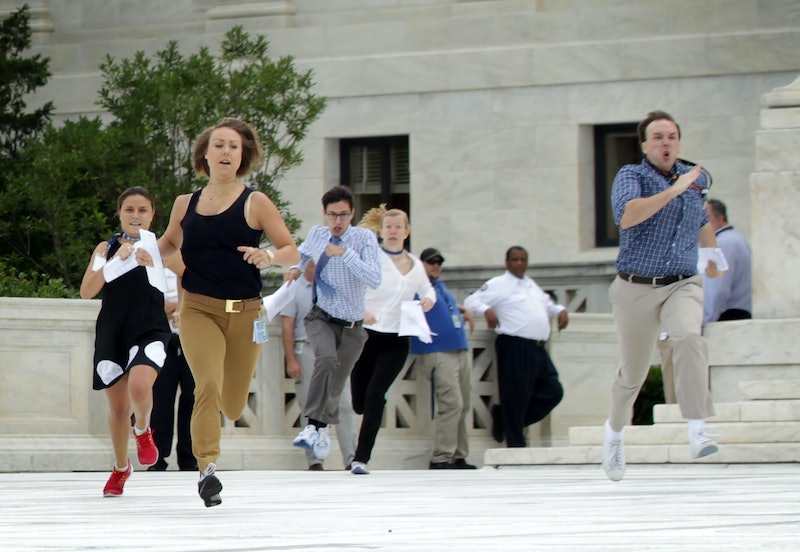 It's the March Of The Penguins of the human world. OK, it's not, but I'd certainly go watch Running Of The Interns at a movie theater: Youngsters rushing madly across the Supreme Court plaza, year after year, papers fluttering in their hands, tasked with delivering SCOTUS rulings to news organizations in the precious seconds before the decisions come out online. This year, Running Of The Interns didn't let us down, featuring a handful of interns sprinting from the Supreme Court like they were chasing Usain Bolt at the Summer Olympics.

One video, captured by C-SPAN, is really something: Five interns, running like their lives depended on it, fiercely clutching a sheaf of papers. So acclaimed is Running Of The Interns that you can see quite clearly that more people in the shot are filming the running interns than interns are running.

Two security guards are looking on, only a tiny bit baffled — it's Supreme Court season; what do you expect? — and one lone intern, who would certainly be me in this situation, is a good few seconds behind the others. However, she's running just as enthusiastically, waving the sheets of paper like a white flag. This intern knows what's up. The sheets of paper are legalizing same-sex marriage, so you get where she's coming from.

What's better than this? I mean, aside from gay marriage being legal in every state in America? I ask you.