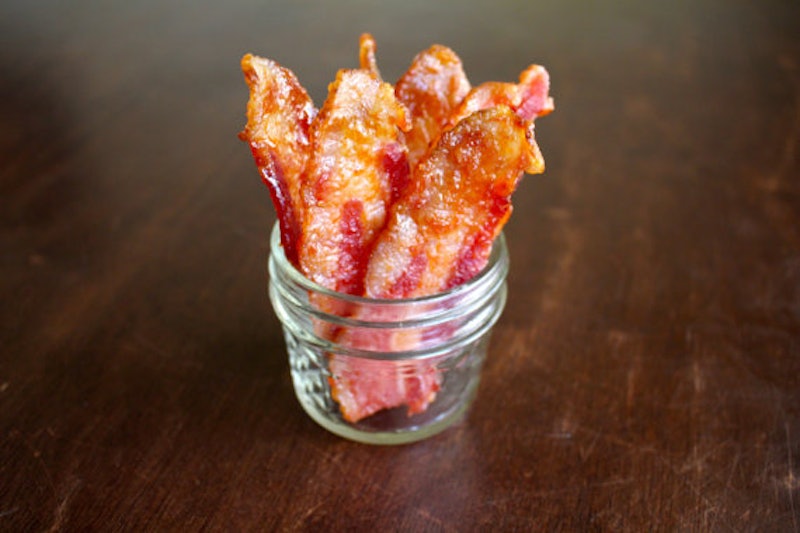 Bacon is always a good conversation topic in my books. There's plenty to say. You have the great debate over Canadian bacon (and the universal decision that it's only worth keeping around for things like eggs benedict). You have the breakfast sandwich discussion: Sausage or bacon? (Sorry bacon lovers, but the correct answer is sausage.) And then there are also bacon facts, which are apparently something people are into. This video does a ~deep dive~ on the science of bacon and I have to admit, it's pretty fascinating. Though I am a little shocked that we've done this many surveys on bacon — like, who is funding that?

If you are a bacon lover, and are seeking more ~scientific~ knowledge on your savory, crispy obsession, look no further. Here are 9 scientific facts about bacon that all bacon lovers should probably commit to memory:

1. 43% of Canadians would choose bacon over sex.

2. Bacon was part of the very first meal consumed on the moon.

4. 65% of Americans would support bacon as the national food.

5. Different countries use different parts of the pig to make bacon.

6. The fats and amino acids in bacon come together to make the most heavenly smell known to man.

7. Baconmania is a classified movement.

8. Bacon has nitrite on it, which is a known carcinogen.

And four strips is half your recommended daily salt intake.

9. It's advisable to supplement your bacon intake with antioxidant rich fruits and vegetables.