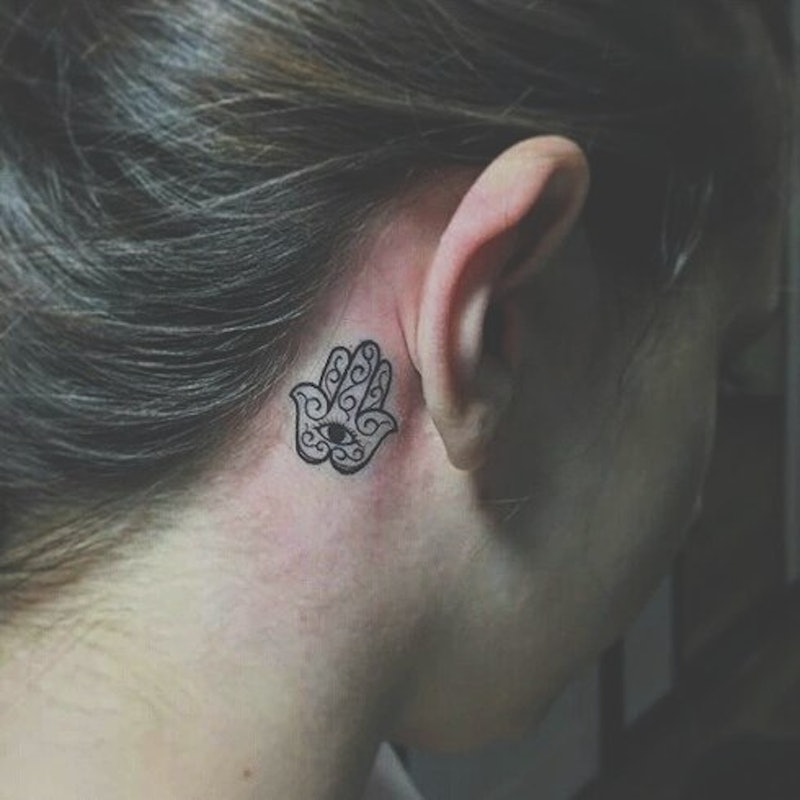 You've got a vision, you're a woman of means, and you are finally ready for that eye tattoo you've been dying to have. You even have a few tattoo designs in mind, but before the big commit you want to know, what does a tattoo of an eye mean? You love the intrigue and the mystery of it, but want to make sure that what you are inking on to your body in a rather permanent way is a message you are down with.

The symbolic eye has been prevalent in cultures for centuries, from ancient Egyptians to the Christian tradition. Maybe you believe it will bring you protection, omniscience, clarity, or maybe you just think it looks super sexy. Whatever your underlying intentions, you can be sure people are going to get nosy and ask you what your tattoo means.

If you're a rebel who blazes her own way, make up your own myth behind the meaning of your new tattoo, or if you are a woman who appreciates the straight facts, stick with the original meaning. Either way, be sure to read this lowdown on the historic symbolism behind the different designs. Educated women tell the best tales.

The Eye of Horus

The Eye of Horus, sometimes called The Eye of Ra, is most often depicted as a stylized human eye, with markings found on a falcon. The myth behind the design varies slightly, but always revolves around Horus, the sky god, whose right eye was the sun and left eye was the moon. Turns out his back stabbing brother tore out his moon eye, and through a struggle (always a struggle), Horus' eye was made whole again and given to his dead father to bring him back to life.

Why does all this matter to you? Because your Eye of Horus tattoo symbolizes protection, healing, and—on occasion—vengeful wrath. Interesting side note, the ancient Egyptians used the shapes in this symbol as numerical fractions. This may be a great tattoo for those of us who need protection in math class. Bonus points if you get a cute Eye of Horus pointer finger tattoo.

Your third eye is associated with enlightenment, intuition, inner wisdom, clairvoyance, and—for all you yoginis—the sixth chakra. Hinduism, Buddhism, and Indian traditions feature the third eye as a dot in the middle of the brow. But that doesn't mean you need to sport a forehead tattoo to channel the meaning of this symbol. Get creative and design your own tattoo of an eye to represent your inner brilliance.

The Eye of Providence

Whether you love money, loathe religion, have conspiracy theories about the Illuminati, or have mostly agnostic bones in your body, the Eye of Providence can have meaning for you. Alt Religion states that this mystical eye can, "reference the benevolent guidance of whatever divine power might exist." Or perhaps for you it just represents the all-seeing, all-knowing omniscience you plan to achieve by reading Bustle articles.

It's not just your shady office mate. People have been giving the evil eye since time immemorial. For centuries, people have used talismans to ward off the evil eye and the curses associated with it. Evil eye tattoos may resemble a Turkish Nazar—an eye made of blue and white concentric circles, or a Hamsa—a stylized eye in the palm of a hand. These evil eye symbols are thought to direct the bad juju back to those who sent it. Variations on these symbols are found in Jewish, Muslim, and Christian traditions, but the symbol is not specifically religious. Meanings can include safety, patience, loyalty, faith, perseverance. Besides being made of beautiful colors or interesting, swirling designs, you'll always be packing protection, even in your birthday suit.

Any tattoo of an eye will be uniquely your own. Create something beautiful with your tattoo artist and let the world see who you are.