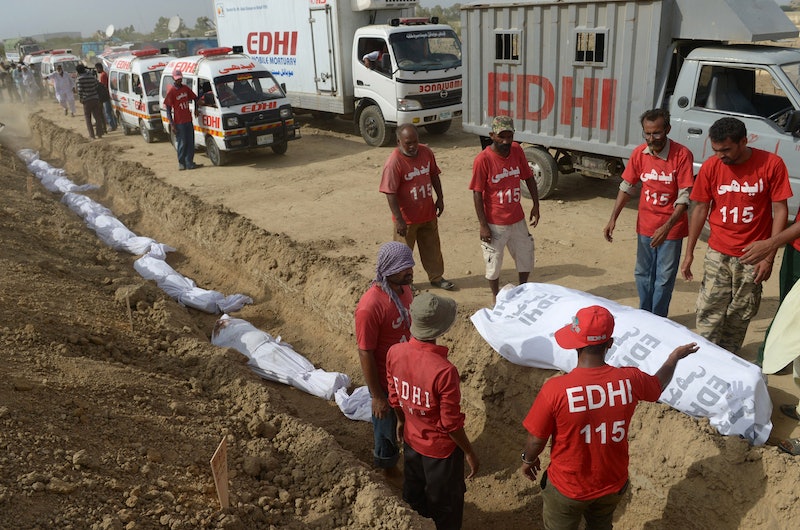 Since it began last Thursday, a devastating heat wave in Karachi, Pakistan, the capital of Sindh province, has killed more than 1,000 people. Natives in the city are accustomed to heat waves at this time of the year prior to the rains of monsoon season, but this summer's heat wave in Karachi has seen the highest temperatures in the country in 15 years. On Saturday, temperatures reached 44.8 degrees Celsius, or about 113 degrees Fahrenheit. Although air conditioner purchases are up 25 percent in Karachi, hospitals are overflowing with victims of dehydration and heatstroke, and with death rates quickly mounting, morgues are congested with more bodies than they can handle.

Higher death rates are becoming not only an effect of the heat wave, but a cause of serious problems for the city’s main morgue. The morgue, run by the Edhi Foundation, was built for about 200 bodies, and as the heat wave claims more and more lives, it is struggling to expand.

Anwar Kazmi, a spokesperson of the Edhi Foundation, which runs not only the morgue but an increasingly overwhelmed private ambulance service in Karachi, told The New York Times that due to the conditions of the dead bodies and the hot climate, the morgue is forced to perform rushed burials. “It has become necessary for us to start burying the bodies because of the bad state we are receiving them in,” Kamzi told the newspaper.

The heat wave's death toll is largely composed by Karachi’s drug addicts and homeless, according to the Times, disproportionately affecting the city’s poorer areas. The heat wave has also claimed the lives of countless pets. Sindh's provincial government proposed that citizens drastically reduce their use of electricity, and in the city of Karachi, many commercial shopping centers and schools are either closing or closing early. Karachi is Pakistan’s commercial and financial capital, and so this will undoubtedly have adverse effects on the country’s economy. According to the Times, the hot temperatures have also seen to prolonged power outages in the city, especially in its poorer areas.

Struggling to care for the more than 14,000 heatstroke victims filling its hospitals with its overwhelmed health care system, Karachi needs all the help it can get — and there are multiple ways for you to contribute.

Ultimately, the heat wave’s disproportionately greater effects on Karachi’s poor raise the question of why cool, shaded areas are so sparse for them in the city, and why they are reliant on outside charities for cold water rather than their government.

More like this
How To See The Lunar Eclipse On May 15-16, 2022
By Kaitlyn Wylde
How To Support Gun Control Reform Right Now
By Morgan Brinlee and Carolyn Steber
Twitter Was Saying The Same Thing About Sam Ryder’s Surprising Eurovision Result
By El Hunt
Taylor Swift, Kerry Washington & More Speak Out On Uvalde Mass Shooting
By Jake Viswanath
Get Even More From Bustle — Sign Up For The Newsletter