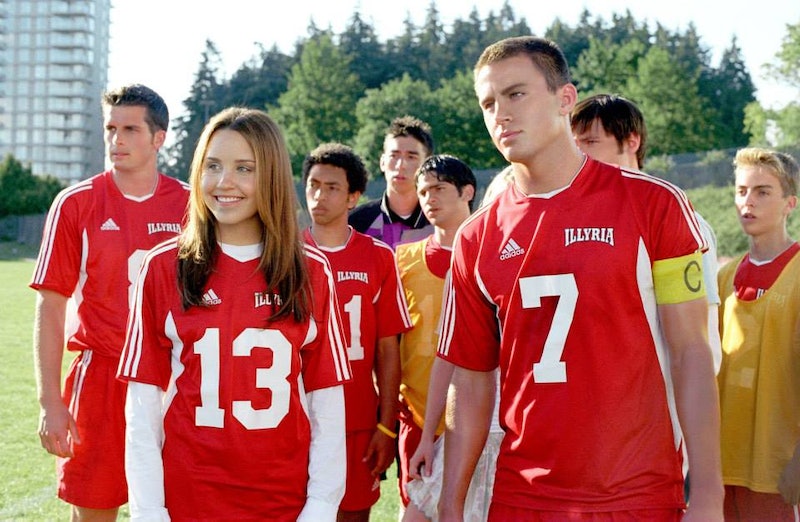 Let's flashback to 2006: Nelly Furtado ruled the music charts, Amanda Bynes starred on the TV show What I Like About You (and didn't have a Twitter account yet), and who was Channing Tatum? It was a simple time back then, when Bynes and Tatum starred opposite one another in the cross-dressing, Shakespeare-inspired movie She's The Man. I decided to watch She's The Man as an adult, and it turned out to be a pretty amazing blast from the past. It's so crazy to think that this movie is from a time when Bynes was more famous than Tatum, and he was merely a hot, unknown actor — until Step Up would premiere later that year. Oh how times have changed.

For those who missed this 2006 teen movie, She's The Man follows high school soccer player Viola Hastings (played by Bynes) who decides to impersonate her twin brother Sebastian at his all-boys boarding school and play on their soccer team when her high school cuts her own team. The story is loosely based on the William Shakespeare play Twelfth Night, but it replaces a shipwreck with soccer balls. Tatum plays Duke, Viola's roommate, soccer teammate, and eventual love interest, once they get the whole cross-dressing situation straightened out. And yup, Tatum was definitely just as hot then as he is now.

Here's what else I noticed when I watched She's The Man again as an adult.

The whole dressing-up-as-a-guy scheme gets put into motion after Viola finds out her soccer team has been cut from her school Cornwall, but the boys soccer team gets to go on. While I totally get why that happens in the film for the sake of plot, it wouldn't happen in reality — the U.S. government prevents it via Title XI. The law states, "No person in the United States shall, on the basis of sex, be excluded from participation in, be denied the benefits of, or be subjected to discrimination under any educational program or activity receiving Federal financial assistance."

The hope of the law was to provide women and girls equal access to sports programs in schools that receive federal funding. In the case of Cornwall, Title IX has failed.

2. Channing Tatum Is Shirtless in His First Scene

This is important to know.

3. What Kind Of Accent Does Bynes Have As A Dude?

It's been bugging me during the whole movie. Her "manly" voice sounds like a combo of Southern, Rastafarian, and just plain weird. It constantly changes, too, and it tips off absolutely no one that perhaps Sebastian is more than just quirky and weird.

4. Tobias Funke Is The School's Headmaster

And that's probably why he doesn't catch on to the fact that Sebastian is actually Viola until the end (sort of). But David Cross, whether it's in this film or in Arrested Development, is hilarious, as always.

5. The Movie Gets Great & Also So Weird After Viola & Duke Kiss

This is when it gets good. Viola and Duke kiss at the charity kissing booth and it's magical for both of them. But then also imagine Viola having to return to being Sebastian and rooming with Duke — awk-ward. She goes between swooning over him and trying to, well, man up.

Plus, Viola as Sebastian and Olivia wind up kind of fighting over Duke, even though Olivia is more into Sebastian and she's trying to make Sebastian jealous. Olivia confesses this to Viola (as Viola), who can't believe it. What a complicated web they've weaved.

6. When The Real Sebastian Returns, No One Notices A Difference — Really

I get that Sebastian and Viola are twins, but everyone seriously couldn't tell them apart? I mean, when real Sebastian is finally back, no one notices that he's finally less awkward and doesn't talk funny? Olivia even plants a kiss on the real him, not even realizing he's, well, an actual guy. Oh, the movies.