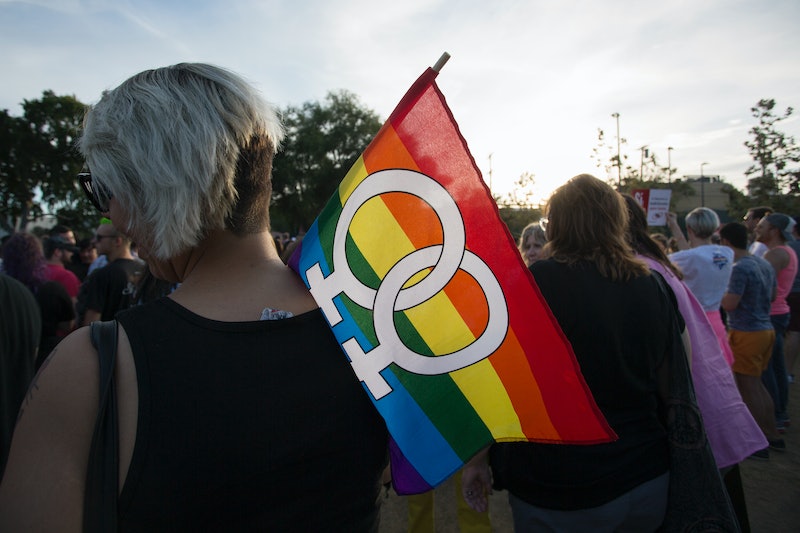 The Supreme Court affirmed the right for same-sex couples to marry Friday in a historic ruling that sealed the rights and dignity of LGBT couples nationwide. The decision was, arguably, a long time coming, with the writing on the wall ever clearer over the last year. Just before 10 a.m. on Friday, same-sex marriage was already legal in 37 states, and public opinion had overwhelmingly shifted from opposition to support. Yet what would you say if you found out we may not be at this point — marriage equality — without Griswold v. Connecticut, a Supreme Court ruling on birth control?

May marked the 50th anniversary of Griswold v. Connecticut, the Supreme Court case that struck down bans on contraception for married adults (a later ruling extended access to unmarried adults). Yes, without Estelle Griswold, the former executive director of Planned Parenthood in New Haven, some of us would have never been able to receive condoms or the birth control pill, even with our husbands at our sides. But what Griswold essentially gave Americans was privacy in your bedroom, your home, your marriage — the legal standing used in cases related to sex, sexuality and reproductive rights for decades.

"The present case concerns a relationship lying within the zone of privacy created by several fundamental constitutional guarantees," the high court wrote in 1965. "[And] a law which...seeks to achieve its goals by means having a maximum destructive impact upon that relationship."

"Like choices concerning contraception, family relationships, procreation, and childrearing, all of which are protected by the Constitution, decisions concerning marriage are among the most intimate that an individual can make," Justice Anthony Kennedy wrote in his Obergefell opinion affirming same-sex marriage. "Indeed, the Court has noted it would be contradictory to recognize 'a right of privacy with respect to other matters of family life and not with respect to the decision to enter the relationship that is the foundation of the family in our society.'"

The right to privacy argument, Kennedy explained, evolved into the equal rights movement we see today. Although the high court could stop government intrusion by striking down state sodomy laws 12 years ago, it perhaps failed to stop further discrimination.

"While Lawrence confirmed a dimension of freedom that allows individuals to engage in intimate association without criminal liability, it does not follow that freedom stops there," Kennedy wrote in the Obergefell opinion. "Outlaw to outcast may be a step forward, but it does not achieve the full promise of liberty."

What Kennedy wrote 12 years ago in Lawrence v. Texas is also crucial to the present framing of same-sex marriage. "When sexuality finds overt expression in intimate conduct with another person, the conduct can be but one element in a personal bond that is more enduring," Kennedy wrote in the Lawrence opinion.

It's fascinating to look at this 50-year-long evolution from the right to privacy to the equal protection of rights, perhaps because it's an evolution that not only captures legal nuances, but also the changing collective conscious around sex and liberation, love and marriage. For the LGBT community, it went from living lawfully but secretly to living recognized and validated.

Yet this evolution also reveals the weaknesses of the right to privacy argument — how it doesn't prevent discrimination nor does it necessarily curtail government intrusion. For example, the right to privacy argument used to legalize abortion in Roe v. Wade was chipped away just 20 years later by Planned Parenthood v. Casey, which upheld the right to abortion but said states also had the right to place restrictions upon the patient as long as it doesn't create an "undue burden." (Coincidentally, Kennedy co-authored the opinion in Casey.) Not only can the "undue burden" test be a tricky one, but these new laws mandating 72-hour waiting periods, requiring ultrasounds and forcing patients to look or hear the image, and providing doctors with state-written scripts to say seem like obvious intrusions that negate that right to privacy. (Or does that right to privacy not extend to the doctor's office?)

On the contraception side of things, the rise of conscience clauses have also been criticized of intruding on a person's choice to use birth control, and last year's Hobby Lobby ruling was arguably the most obvious violation of the right to privacy. But it's also no wonder that Justice Ruth Bader Ginsburg, in her Hobby Lobby dissent, talked more about equal rights for women than rehashing the privacy argument. As Jill Lepore said for The New Yorker recently, "When the fight for equal rights for women narrowed to a fight for reproductive rights, defended on the ground of privacy, it weakened."

Still, marriage equality may very well not be here on June 27, 2015, without Estelle Griswold and her fight to provide birth control to New Haven couples. In Griswold, the Supreme Court first recognized marriage as a fundamental right, and it all started, really, with this question:

Would we allow the police to search the sacred precincts of martial bedrooms for telltale signs of the use of contraceptives? The very idea is repulsive to the notions of privacy surrounding the marriage relationship.