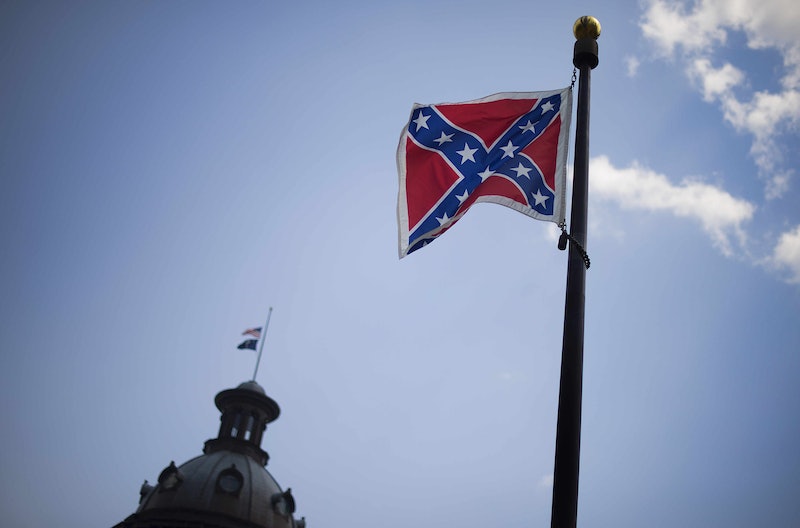 It's been an emotional week, with the major SCOTUS rulings on both health care and same-sex marriage, deadly attacks in Tunisia, France, and Kuwait, and a devastating plane crash in Alaska that killed nine — and don't we all deserve a little resolution at some point? Luckily, Saturday brought with it a truly spectacular tale of daring, when a woman scaled a flagpole in South Carolina to take down the Confederate flag. According to Columbia authorities, 30-year-old Bree Newsome and fellow activist James Ian Tyson climbed over the statehouse's 4-foot wrought-iron fence to get to the large flagpole flying the Confederate flag, which has become the subject of heated debate after a shooting at a historically black church in Charleston earlier this month.

According to responding officers, Newsome began climbing the 30-foot steel flagpole at sunrise Saturday in an attempt to remove the flag, which has flown uninterrupted since the shooting. Newsome wrote in an email statement to the media that the flag was a sign of disrespect toward those killed in the racially motivated attack on the Emanuel AME Church.

"We removed the flag today because we can't wait any longer," wrote Newsome. "It's time for a new chapter where we are sincere about dismantling white supremacy and building toward true racial justice and equality."

Authorities reported that Newsome, who used climbing gear to scale the 30-foot pole, was already halfway to the top when local police first arrived. Despite calls to return to the ground, Newsome continued to the top, retrieved the large Confederate flag, and began climbing back down, where both she and Tyson were arrested and charged with misdemeanors. Police reported that both could be punished with up to a $5,000 fine or three years in jail.

Despite calls from major parties, including Gov. Nikki Haley, to remove the flag, the state legislature must first obtain a two-thirds vote in favor of removing it before it can actually be taken down in any official capacity.

"I'm surprised it took this long," 59-year-old Lowell Collins told The Washington Post on Saturday. Collins told the paper that he didn't know how much of a difference Newsome's actions would make in the long run. But that didn't make it any less awesome.

"I knew you were a badass, but damn," wrote one Twitter user on Saturday. "She just single [sic] handily did the trillest thing of 2015," joked another user. One user noted that she had completed her act with a proud smile. The majority of users agreed that the act was equal parts entertaining and inspiring.

By midday, a new Confederate flag had already been secured to the steel pole once more. But Newsome had already received a well of support from many who believe the flag, first used by the South during the Civil War, remains a symbol of hatred and racism.

"I'm prepared to be arrested," Newsome reportedly told police after reaching the ground on Saturday.

And the crowds cheered.