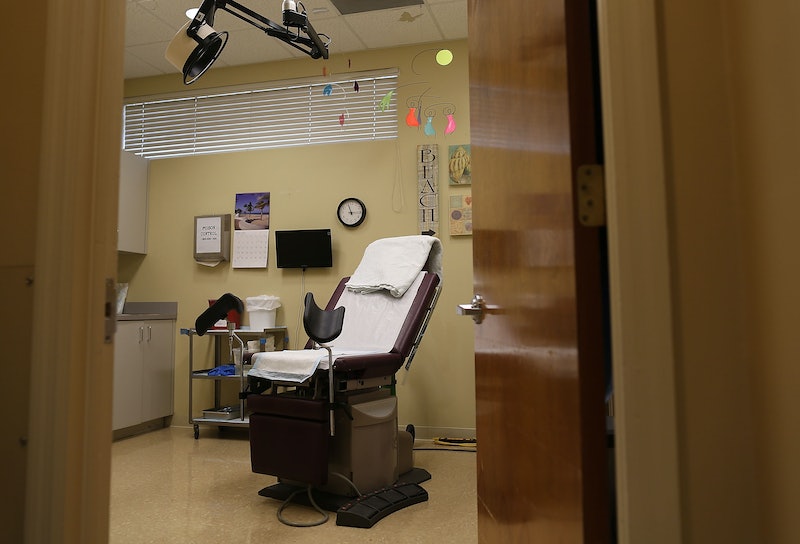 As abortion providers in Texas brace for closures barring a stay from the U.S. Supreme Court, abortion providers in Tennessee received a big victory on Friday. A federal judge temporarily blocked a new law that would require all clinics in Tennessee that perform more than 50 surgical abortions each year to become ambulatory surgical centers (ASC) — a requirement that would require millions of dollars in structural upgrades and enforce stricter guidelines on how the facility operates. The law is similar to the provision in Texas that shuttered more than half of the state's remaining abortion clinics.

In Tennessee, where there is already little access to abortion, the ASC law approved in May by Gov. Bill Haslam threatened to close two clinics, including one in Nashville, the state's second-largest city. Currently, Tennessee has just seven abortion clinics, one of which only provides medication abortion within the first nine weeks of pregnancy; that means the law could leave just four clinics for surgical abortions.

"Tennessee women have been granted a temporary reprieve from the tidal wave of clinic shutdown laws sweeping the South," said Stephanie Toti, Senior Counsel at the Center for Reproductive Rights. "We will continue to stand with the women of Tennessee, and their health care providers, to ensure no clinic is forced to shut its doors due these sham regulations."

Memphis, Tennessee's most populous city, already has an abortion clinic that qualifies as an ambulatory surgical center. However, the clinic there, CHOICES Memphis Center for Reproductive Health, has also joined the two clinics and the Center for Reproductive Rights in challenging two other laws that could either dramatically reduce abortion access in the state or increase burdens for patients. The laws include a 2012 admitting privileges provision that closed two clinics providing surgical abortion, and a newly passed 48-hour waiting period that would require patients to make at least two trips to the clinic to receive an ultrasound and in-person counseling. In the case of medication-induced abortions, a patient could need to make at least three clinic visits.

"In recent years, Tennessee politicians have engaged in a relentless attack on abortion rights, enacting a multitude of restrictions designed to shutter clinics that have provided safe and affordable abortion care for decades and impose unconscionable obstacles on women seeking such care," the Center for Reproductive Rights alleges in the lawsuit filed earlier this week. The plaintiffs argue that the recent laws have curtailed abortion access in the already-crippled state.

"Women in Bristol would then have to travel over 100 miles to Knoxville to reach the closest Tennessee abortion provider," the lawsuit alleges. Knoxville, too, only has a clinic that provides medication-induced abortions, which limits the options for pregnant patients who were more than nine weeks pregnant. Meanwhile, the admitting privileges law, while responsible for closing two clinics since 2012, has also "limited the capacity of the remaining clinics by reducing the number of physicians eligible to provide abortions," the lawsuit states. Doctors who once provided abortions in Tennessee are now unable to do so because they cannot receive admitting privileges from a local hospital, and "clinics have had difficulty recruiting new physicians."“Tennessee women deserve the same access to abortion as women living in any other state,” said Rebecca Terrell, executive director of CHOICES in Memphis. “Whether by forcing a woman to delay health care or advancing measures targeting reproductive health care clinics for closure, Tennessee politicians are fixated on coming between women and their health care providers."Images: Getty Images (1)