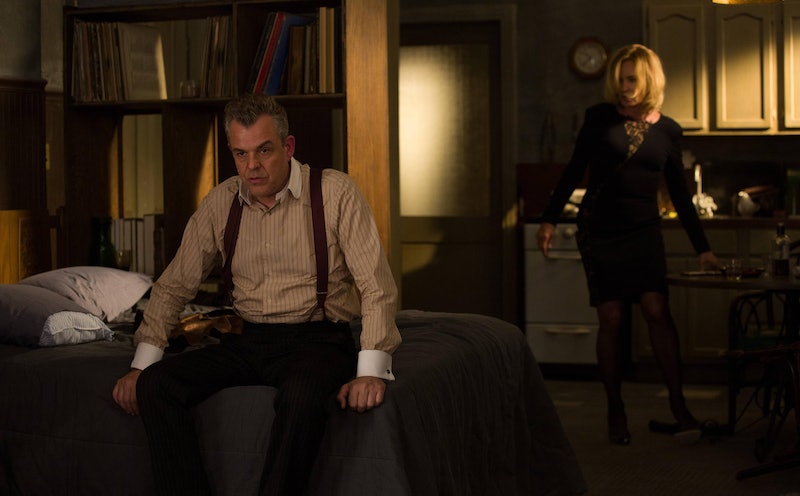 On other shows, "table-setting" episodes might have characters who’d never interacted before begin to hatch a scheme, or introduce a plot element you just know will play out in the three weeks before holiday break. Which is not to say American Horror Story: Coven does not do those things, just that it tends to kill one or eight people in the process and the plot is usually "zombie threesome" or another Cards Against Humanity possibility. Last week's episode offered similar table-setting, but come on — it's in the form of a dude named the AXEMAN. AHS makes the often predictable world of serialized TV drama feel fresh and gross, which do not have to be mutually exclusive!

Last night’s entry, "The Dead," is the 7th of 13 episodes this season and the turning point for at least a few of the major plots that have been percolating. Whatever wacky distractions the first half threw at us — undead sieges and minotaurs, to name a few — it’s clearer now where we’re headed in the back half of the season. And the first thing to talk about is FIONA.

Oh, Fiona. Why would you sleep with a guy who’s got a dead body rotting away in his tub and is also, you know, a ghost? Especially one who’s been watching you since you were a little girl? (It’s the second part, honestly, that would turn me off the most.) I won’t go so far as to say this is the WORST decision you’ve made all season, but it’s certainly not the finest. He did seduce you as only a Saxman can, describing in horrible jazzy detail all the fingering he does to his instrument and the tones he summons by blowing on the reed… but the guy’s apartment was the pits. You’re a classy lady, Fiona! Plus, a witch! You can ASSUREDLY do better than a roach-infested bathroom and a few shots of Jack.

But poor taste in men is, sadly, the least of your problems now. Because your newly Oracle-ized daughter, Cordelia, has seen with her mind’s eye exactly what you did to Madison. And, with Zoe using her new super-witch powers to 1) re-attach Spalding’s tongue to learn the truth about Madison’s murder and 2) STRAIGHT MURDER THE GUY IN VENGEANCE, it looks like judgment is riding in quick. Said Cordelia, about her mom: "We need to kill her. We need to kill her dead." You probably don’t have too many sax solos left there!

What’s Fiona’s endgame at this point? She’s deluded herself into believing she’s untouchable, obviously, first with the girls of Robichaux’s and again with the High Council that seems to have just taken up residence around the corner. She’s arrogant; she can’t know what’s to come. And she’s also blinded by the frustrations of aging, the signs of which are showing up more and more frequently. Time is not on her side. But at the same time — Fiona is a thinker. Fiona wouldn’t have some sort of failsafe in place for the moment her house of secrets is finally knocked to the ground. She won’t be going down without a fight.

Of course, any power accumulated by her nemesis Marie Laveau isn’t exactly good news for the Supreme. Laveau made a BIG move in "The Dead" when she successfully brought Queenie into her voodoo fold, promising her acceptance that the witches at Robichaux’s would never be able to give her. But that wasn’t even the biggest move — no, that would be having Delphine LaLaurie, Queenie’s slave, hand-delivered to her, presumably to be tortured LIKE CRAZY over the course of the next few weeks. It’s funny — LaLaurie has become a sympathetic, almost comical character since being brought back to life and forced to watch Obama inauguration footage. But that flashback last night — you know, the one where she USES THE BLOOD OF HER SERVANT’S MIXED RACE BABY FOR BEAUTY CREAM — just makes it really hard to root for her. Saying "It was a different time!" mitigates things, sure, but only so much.

More like this
Everything To Know About Marvel's 'Echo' Series On Disney+
By Grace Wehniainen
Will Viewers Revisit Welcome To Eden For Season 2? What To Know
By Kadin Burnett
The Good Doctor Already Added 2 New Cast Members For Season 6
By Brad Witter
Will Vampire In The Garden Get A Season 2? What To Know
By Kadin Burnett
Get Even More From Bustle — Sign Up For The Newsletter