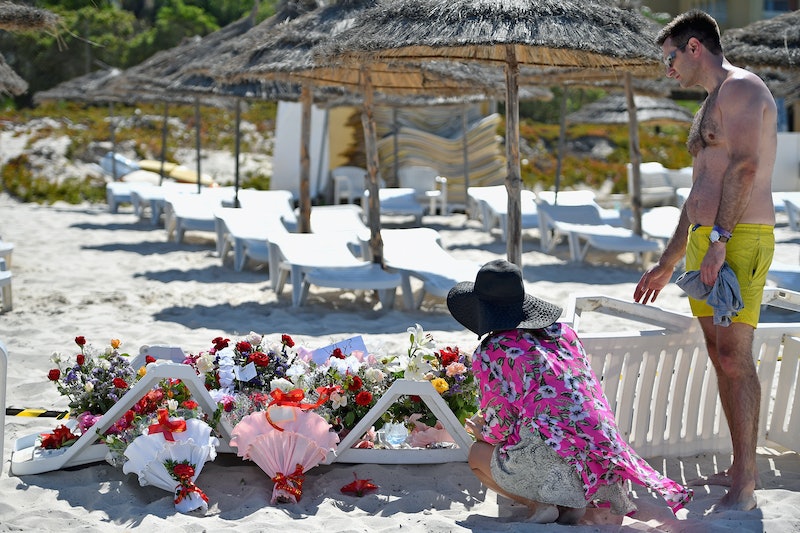 The death toll in Friday's shooting massacre at a Tunisian resort has risen to at least 39 people, with 15 of those killed British citizens, the U.K. foreign office confirmed Saturday. The terrorist attack broke out Friday afternoon at the Imperial Marhaba Hotel at Port El Kantaoui near Sousse, a popular vacation spot for Britons and other Western European nationals. According to The Telegraph, this most recent Tunisia terrorist attack is the worst attack on British people since the July 7, 2005, bombings that killed more than 50 people in London.

"Sadly, I can confirm that at least 15 British nationals were killed in yesterday's atrocity but I should stress that the number may well rise as several more have been seriously injured in this horrific attack," U.K. Foreign Minister Tobias Ellwood said at a news conference Saturday. "This is the most significant terrorist attack on British people since 7/7 and highlights the ongoing threat of ISIL."

One decade ago, Great Britain was rocked by the 7/7 bombings, which were an orchestrated attack of several suicide bombs throughout central London. The bombings occurred in the London Underground and on a double-decker bus, killing 52 people in all. Those attacks, too, were linked to terrorism, as the four suicide bombers were Islamic extremists.

The foreign minister said that U.K. officials were also working on returning Britons at the Tunisian resort to safety. "This act of evil and brutality demonstrates why we must confront this type of extremism wherever it happens at home or abroad," Ellwood said.

Hours after the shooting massacre at the Tunisian resort, ISIS claimed responsibility of the attack, confirming fears that this was the work of the extremist group. ISIS named the gunman and posted an alleged photo of him online, but Tunisian authorities have not confirmed his identity. U.S. officials also haven't confirmed whether or not ISIS is directly involved with the Tunisian attack, or inspired the gunman. ISIS has been known to "inspire" jihad across the world through its online propaganda.

On Friday, U.S. Department of State spokesperson John Kirby released a statement condemning the recent terrorist attacks in Tunisia, Kuwait, Somalia, and France. "The United States grieves with the people and governments of Burundi, France, Kuwait, Somalia, Tunisia, and other nations affected by these vicious attacks and stands with them in solidarity as they reject terrorism, protect their communities, restore peace and security, and persevere through these tragedies," Kirby said.

Despite the horrific attack on Britons, the U.K. foreign office has not changed its travel advisories in northern Tunisia. The office, however, still advises against all non-essential travel in southern Tunisia near the border of Libya.

Meanwhile, RIU Hotels & Resorts, which operated the resort near Sousse, is currently working with tour companies to return guests home, if they so choose. The hotelier said in a statement Saturday that "most of our guests are opting" to return to their home countries. "We take this opportunity to show our gratitude for the professionalism and sensitivity that all employees of RIU as well as the travel agencies and tour operators are showing in these difficult times," RIU Hotels & Resorts added.