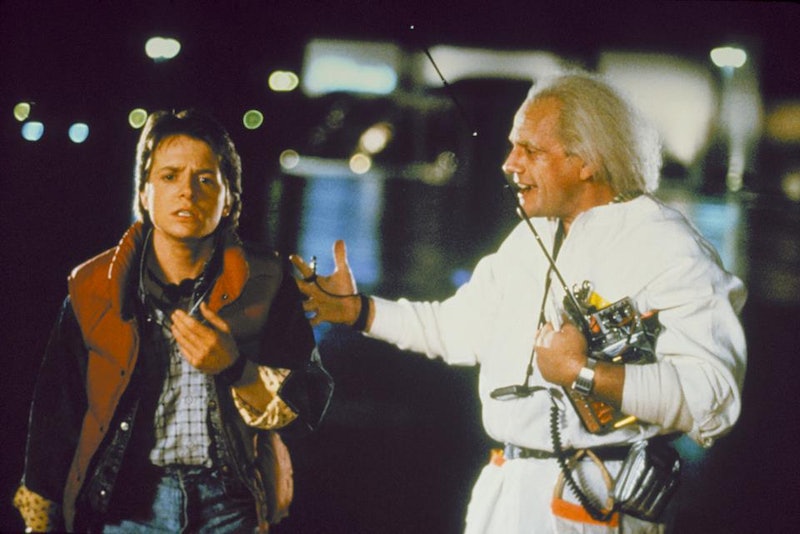 During my childhood, I thought the Back to the Future movies were the coolest. More than anything, it inspired my life-long obsession with time-travel and films that deal with the subject. The first movie premiered 30 years ago, and I find myself wondering what all the Back to the Future stars are up to now. The film was released back in 1985 by Hollywood giants who weren't quite giants yet — Robert Zemeckis directed, he wrote the movie with screenwriter Bob Gale, and produced by Steven Spielberg.

To refresh your memory, the first classic Back to the Future movie follows 17-year-old Marty McFly (played by Michael J. Fox) as he travels back to the year 1955 in the famous DeLorean time machine, operated by Doc Brown (Christopher Lloyd). There, he meets his parents at age 17 and unwittingly becomes the object of affection of his own mother Lorraine (Lea Thompson). Marty must make sure his mom falls in love with his dad (Crispin Glover) to make sure he'll be born, battle bully Biff, and help Doc get them both back to the present in 1985. It's a tall order for Marty, but part of all the reasons that makes this movie such a classic.

But what are the stars up to today? Plenty, it turns out. Get the update on your favorite Back to the Future actors below.

Fox has been a sitcom fixture since his days on the classic TV series Family Ties. Sure, he flirted with movies like the Back to the Future trilogy, but he's got a long TV resume. Most recently, he starred in NBC's The Michael J. Fox Show and recurs on The Good Wife as the cunning lawyer Louis Canning.

He also founded the Michael J. Fox Foundation for Parkinson's Research after he was diagnosed with the disease himself in the '90s.

The actor is now 76 and is still going strong. In 2014 alone, Lloyd appeared in A Million Ways to Die in the West, Sin City: A Dame to Kill For, and The Michael J. Fox Show. He also does theater, appearing in plays in New York, and Lloyd has done voice work for video games like King's Quest and Lego Dimensions.

Thompson is another TV fixture, having been a star on the small screen since the "Must See TV"-filled 90s — I mean, I can't be the only one who remembers her as Caroline in the City. The actress currently stars in ABC Family's Switched at Birth as Kathryn Kennish and she has even directed a few episodes.

Last year, she reached the quarterfinals in Dancing With the Stars with professional dancer Artem Chigvintsev as her partner.

Glover is a star of films, a writer of books, and a singer of music. He can really do it all. Lately, Glover has been playing Moseley Baker in the miniseries Texas Rising.

Oh, Biff. It's hard to forget someone like you — and the actor portraying you. Wilson has moved onto other roles and recently, he appeared in the movie The Heat, as well as lending his voice to characters in The Spongebob Movie: Sponge Out of Water and Rio.

After playing Marty's girlfriend Jennifer Parker in Back to the Future, it looks like Wells took a lengthy break from acting — she was replaced by Elizabeth Shue in the rest of the trilogy due to her mother's cancer. She returned to acting in 2008, appearing in an indie movie called Still Waters Burn. Wells has also voiced Jennifer in Back to the Future video games.

Looks like everyone's keeping busy in the future — or is this the present, now?