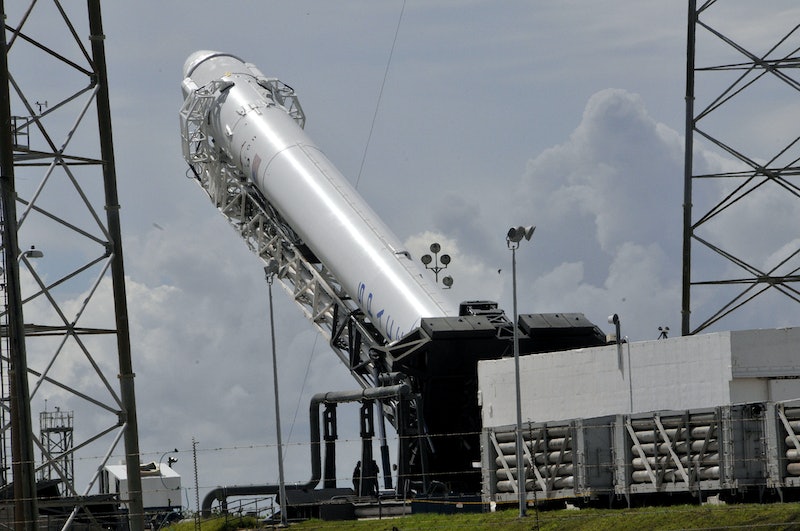 The unmanned Falcon 9 rocket from Elon Musk's SpaceX program exploded a few minutes after launching from Cape Canaveral, Florida, Sunday morning, according to Bloomberg. The explosion occurred before the first stage of the rocket was set to separate, according to a statement from a SpaceX spokesperson. The rocket was headed for the International Space Station with supplies and equipment. It was the second U.S. resupply mission to fail in less than a year, which could cause problems for Musk and the National Aeronautics and Space Administration. Neither SpaceX nor NASA has released information about what may have caused the explosion. SpaceX tweeted that "the vehicle experienced an anomaly on ascent."

The shipment was carrying more than 4,000 pounds of cargo, which included food for astronauts, spare parts, and an adapter that would allow future manned missions to dock at the space station, according to TIME. The adapter is the worst loss because it was essential to the government's plan to send astronauts to space via manned rockets instead of shuttles. The adapter would've been installed by American astronaut Scott Kelly and another astronaut living at the space station on their first space walk. Kelly and Russian Cosmonaut Mikhail Kornienko started their year-long mission, which is twice as long as the average mission, at the International Space Station in March.

NASA spokeswoman Stephanie Schierholz told The Washington Post that the space station had plenty of supplies and that the crew would be fine even if there was another resupply failure. Currently, there are only three people living at the station: Kornienko, Kelly, and Gennady Padalka. Although a NASA presentation cited by the Post said the crew could run out of food by Sept. 5 if not resupplied, Schierholz said there isn't cause for alarm. She said that even if something were to go wrong on the station, there are eight more resupply missions scheduled for this year, including several this summer, "so there are plenty of ways to ensure the station continues to be well-supplied."

An Antares rocket launched by Orbital ATK Inc. exploded over a Virginia launchpad in October, erupting into a fireball on its decent, according to Bloomberg. Sunday’s resupply attempt was the seventh mission under Space Exploration Technologies Corp.’s $1.6 billion contract with NASA to resupply the space station.

On July 3, Russians are scheduled to fly another Progress 59 to the station to help prepare for three more crew members who will be joining Kelly and the other astronauts later in the month, according to the Post. On its website, NASA says the one-year mission is a "stepping stone to Mars and beyond," and that it will help the organization learn more about the medical, psychological, and biomedical challenges faced by astronauts during long-duration spaceflight.

More like this
How To See The Lunar Eclipse On May 15-16, 2022
By Kaitlyn Wylde
How The City Healed Five Years On From The Manchester Arena Attack
By Ella Glover
Taylor Swift, Kerry Washington & More Speak Out On Uvalde Mass Shooting
By Jake Viswanath
Photos Of Boris Johnson Drinking At A Downing Street Lockdown Party Have Surfaced
By Bustle UK
Get Even More From Bustle — Sign Up For The Newsletter