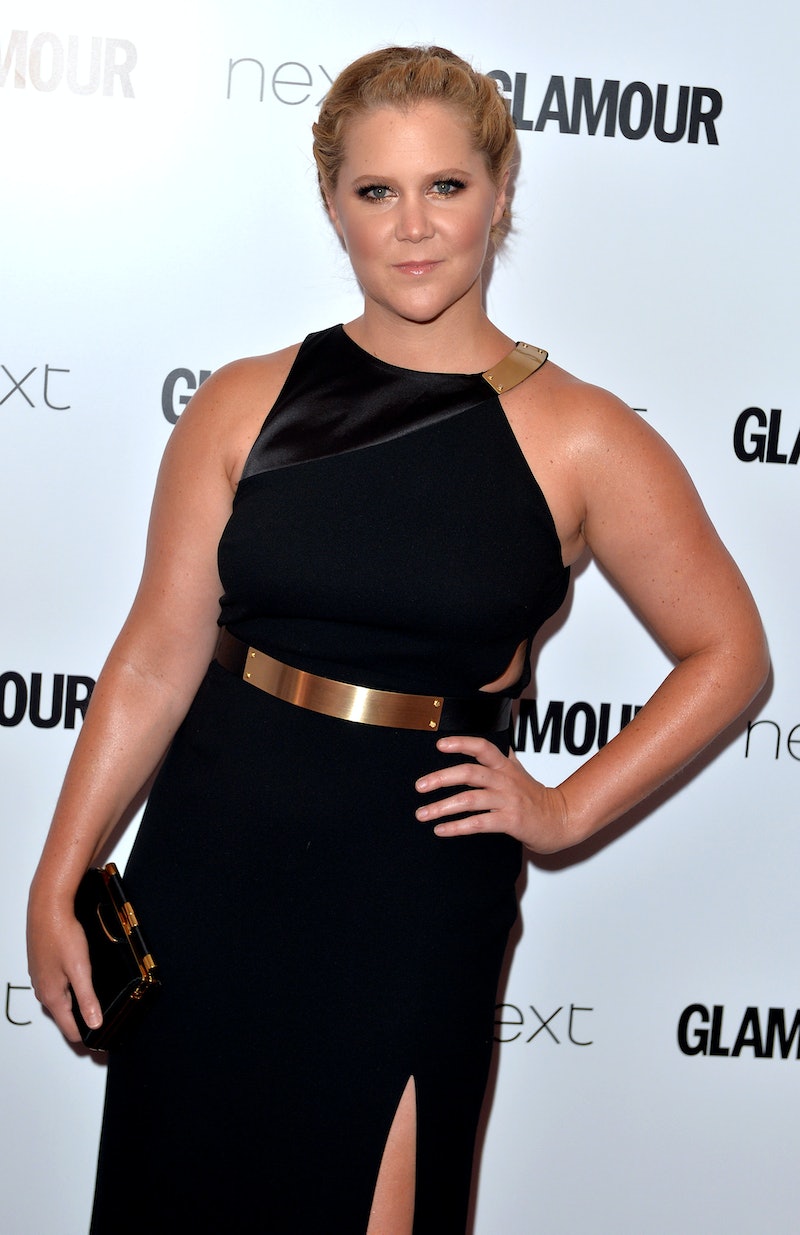 Amy Schumer has never shied away from speaking her mind, which is one of the reasons we love her so much. Always game to push the envelope, the Trainwreck actress is deft in using her comedic prowess to do more than simply garner laughs. A self-proclaimed feminist, Schumer consistently uses her uproarious Comedy Central series, Inside Amy Schumer, to upend stereotypes related to sexism, ageism, and other pervasive issues. If you're a fan of the show and her stand-up, you've probably noticed that no topic is off limits when it comes to her comedy. Along with subjects related to casual sex, femininity, and religion, the comedian does not buck from including jokes centering on race. On Sunday, June 28, Schumer took to Twitter to post a note addressing her use of racial humor in her stand-up and skits. Knowing the uproar that undoubtedly would follow, she captioned the tweet, "Put down your torches before reading this so you don't catch fire."

Often times, comedy can be used as a vehicle for progress by including these issues as a way to make us laugh, while also opening up discussions many are afraid to have. This can be a tricky feat, however, as sensitive topics — depending on how they are handled — can also add little more to a stand-up segment than shock value. Here's what Schumer has to say on the matter:

Update: After writing the note, Schumer began engaging with critics on Twitter about the very subjects she brought up in her post. To one user, @nationsfilm, who asked "which people" are laughing at her jokes on race, she politely asked him if she'd ever offended him. He said yes (regarding a scene in Trainwreck), and she responded:

In her note, after countering those who — as Schumer puts it — feel her humor is a "blindspot for racism" and "lazy," she goes on to state her belief that equality is something that should be inclusive.

"I am not going to start joking about safe material. And don't ask that of me...I ask you to resist the urge to pick me apart. Trust me. I am not a racist. I am a devout feminist and lover of all people. My fight is for all people to be treated equally. So move on to the next person who is more deserving of your scrutiny and not the girl in your corner."

Indeed, these sentiments have been showcased in Schumer's show, as well as her stand-up, for years. There are a plethora of examples where Schumer has pushed the envelope further than many comics, while managing to avoid being distasteful. Here are a few times the comedian and actress succeeded in making us laugh while also upending stereotypes:

Schumer takes the hypocrisy of the "no makeup look" — which involves a good amount of makeup — and turns it on its head when a group of One Direction lookalikes change their tune after encouraging Schumer to go makeup-free.

Schumer is joined by Patricia Arquette, Julia Louis-Dreyfus, and Tina Fey in a sketch that tackles the ageism pervading Hollywood (and... well... everywhere).

In Schumer's aforementioned tweet, she notes, "Stick with me and trust I am joking. I go in and out of playing an irreverent idiot...I enjoy playing the girl who time to time says the dumbest thing possible..." The comedian did just that in the above bit, where she skillfully plays the role of a person who may preface every conversation with, "I'm not racist, but..." before making a completely archaic remark. As is standard with Schumer, her comedy uses these roles to display just how ridiculous said stereotypes are.

Schumer and her friends take turns offering compliments and becoming completely enveloped by self-deprecation. It isn't until one woman responds with an appropriate "thank you," that all hell breaks looks.

Schumer tackles racial discomfort in a sketch where she assigns herself a new name, and tells a cashier, "I guess he would probably vote for Obama," while uncomfortably attempting to describe the store employee who helped her pick out a shirt.

Schumer plays an acerbic magazine editor who demands pitches from her staff on "500 Hottest Sex Tips." She lauds ideas which include abrading a man with a pumice stone and smearing frozen dinners on a suitor's nether regions. For the sake of men everywhere, I hope no one will be trying out these sex tips anytime soon, e.g., ever.

In anticipation of a booty call, Schumer takes absurd measures for sexual preparation. She quits her job and drains her bank account with a hodgepodge of waxing treatments and other beauty regimes. When her Casanova finally comes knocking, Schumer is bombarded by images of magazine headlines, including, "He's Here and You're DISGUSTING!" Panicked, she hides under her bed in favor of getting her swerve on.

Keep on keepin' on, Amy Schumer, because when it comes to pushing boundaries and breaking stereotypes, you're absolutely winning the game.