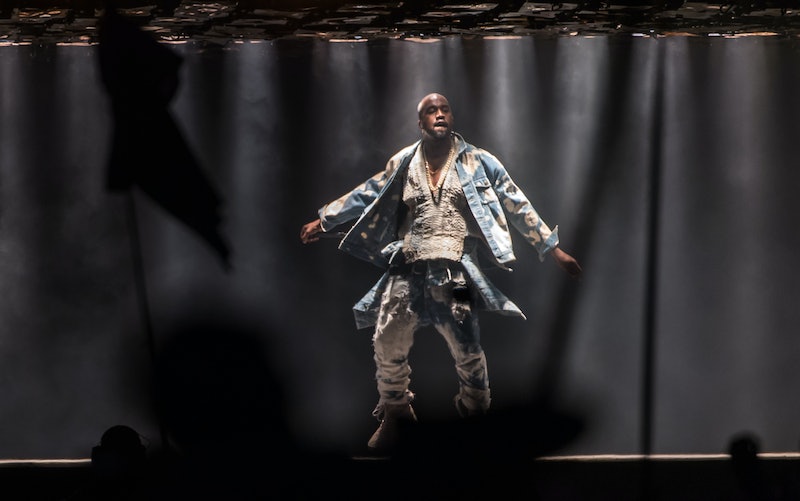 Kanye West headlined the Glastonbury Music Festival in the UK and, of course, there was a little bit of controversy. Before the performance, attendees had distributed a popular Change.org petition, requesting to replace Yeezy with a rock act. Their request wasn't met, but Kanye, always a crowd-pleaser gave the audience some rock. Kanye covered "Bohemian Rhapsody" by Queen at Glastonbury and it was glorious. Not only was it the perfect response to those petition haters, but it totally proved that Yeezy even has a magic music touch when it comes to the classics.

The famous intro to the song blasted as the 38-year-old rapper walked out and he soon began rap-singing with some altered lyrics. That didn't stop the festival crowd from singing along to the famous karaoke song, though. "Mama, I just killed a man / Put my gun up to his head / Pulled a trigger, now he's dead," Ye sang. Once he and the audience reached the lyric "nothing really matters," Yeezy kicked off performing his own music, starting with "Can't Tell Me Nothing." But now that I've all received this taste of Kanye covering the classics, I want more. There's a certain something special about one legendary artist putting their spin on another legend's classic and just seeing where it goes.

Here are some other classic songs I think Ye needs to totally cover next.

"Total Eclipse Of The Heart" By Bonnie Tyler

West has rapped and sung about heartbreak before, and I think it would be fun to see Kanye put his own spin on another ultimate karaoke song.

If Kanye is looking for another long and epic tune, how about this eight-minute love ballad by Meat Loaf? It was a huge hit in the '90s and Yeezy can interpret the famous "that" in Meat Loaf's lyric "But I won't do that" in any way he chooses.

The young singer flawlessly covered West's "Flashing Lights" last fall while on tour, so how about Ye do one of her songs in return? I think he could have a pretty unique take on the once ubiquitous "Royals."

The hatchet between Swift and West has been long buried and there's even been talk of the duo working together at some point. So how about a cover? I think Ye could do some awesome things to the already awesome "Blank Space" and its "Starbucks lovers."

"Earned It" By The Weeknd

The Weeknd and Yeezy performed together at Coachella this year, so why not let Kanye take a crack at one of the biggest songs of the year? He could surely have a fun and sexy take on the Fifty Shades of Grey song and he can dedicate it to wife Kim Kardashian.

Kanye has always had a lot of respect for Queen B. He's stormed stages in her honor and they've even collaborated together. How about it if Ye took that admiration to a whole other level and covered one of her old school ballads? I'm sure Jay Z would be OK with it.