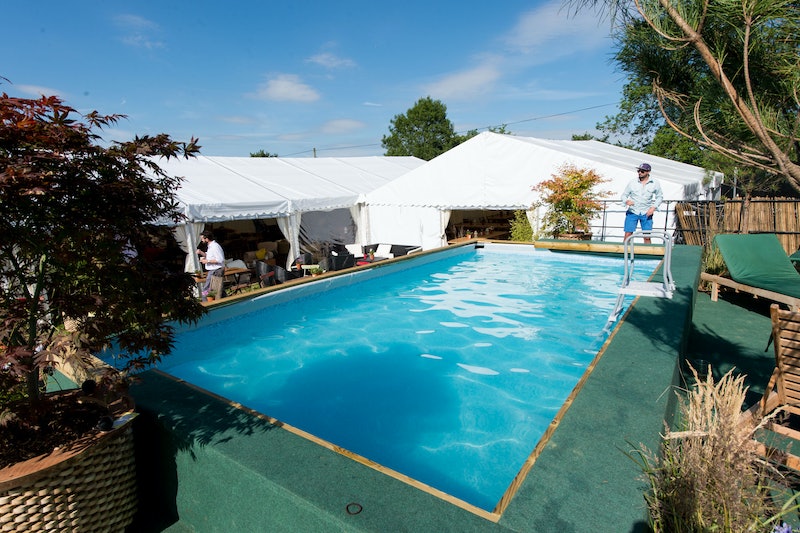 In the 2000 film The Emperor's New Groove, the egotistic emperor Cuzco wants to build his pool on top of a mountain, but there's a problem that our beloved Cuzco isn't aware of: Pools are death traps. If this wasn't made completely obvious when the Type-A lifeguard screamed at you to not to "walk on the wet concrete" or when your mom repeatedly warned you not to "swim with a full stomach," then it's time for a bit of a review. Ready to go for a dip into the death and destruction that can await your chill summer day? Hold tight to your water noodles, folks. There are so many ways your swimming pool is dangerous and could kill you.

For starters, let's harken back to the warning that came after the shrill lifeguard whistle: "Do not run near the pool." You've been hearing this since you were in neon baby floaties. Concrete + water + hard surfaces = a sure and certain concussion. Remember that one time Hallie and Annie's dad fell into the pool and smacked his head in The Parent Trap? Oh, no? It was all just a double-vision image of Lindsey Lohan looking cheeky as she sits poolside? Right. We know better. There was a dangerous pool just steps away, LiLo. Stop pretending your life isn't at risk in this screenshot.

So, just in case you were thinking of relaxing today, here are three ways your pool is actually trying to murder you. Keep this neurotic guide on file the next time you grab your sunscreen for a casual day by the (chlorinated) water, and maybe you can avoid a complete and total nervous breakdown in fear for your life.

Drowning Is A Very Real And Scary Risk

Drowning is a serious matter. The CDC reported that between 2005 and 2009, there were 3,533 fatal, unintentional drownings in the United States. This was equivalent to about 10 drownings per day. The New York Times reported that portable pools are often a large risk, especially for children. In 2011, the journal Pediatrics released a study that found that 209 backyard drownings and 35 near-drownings took place between 2001 and 2009. This same study said that one in five children die in a portable pool drowning during the summer months.

Access to swimming lessons are a big factor here, according to a graphic by the CDC. The age range between 5 and 19 is at risk of drowning, and the risk spikes right up again in the 85-plus age range. Water safety and ability can save lives. We know this grave fact, but the stats are devastating.

Ah, yes. The classic "doody in the pool" scene from Caddyshack. This is actually a very real fear in a lot of people, so don't brush this away as farce. The CDC confirmed that to fear dirty pool water is completely and totally rational. This is not like dinosaurs coming back to life (except that is a fairly rational fear, FYI). Guess what? Chlorine does not immediately zap all germs away. This is the very matter-of-fact, scientific way that the CDC put it, by the way. Kidding.

But in all seriousness, RWIs, or Recreational Water Illnesses, are diseases picked up through swimming in water, according to the CDC. The CDC reported that RWIs are caused by "germs spread by swallowing, breathing in mists or aerosols of, or having contact with contaminated water in swimming pools, hot tubs, water parks, water play areas, interactive fountains, lakes, rivers, or oceans." The CDC said that in the past two decades, the number of RWI outbreaks have significantly increased. There were 10,500 cases in 2008 alone. Diarrhea is the most common RWI, but there are a whole host of other risks, including "gastrointestinal, skin, ear, respiratory, eye, neurologic, and wound infections," according to the CDC.

Chlorine Isn't Exactly Good For You

So, we know that chlorine keeps pools from being little hotbeds of bacteria, but it's not quite a luxurious substance that soothes the skin. Although chlorine is no longer used as warfare gas, as Carl Zimmer wrote in his column in The New York Times, chlorine has a little bit of a sketchy history. Aside from its being used to carry out gruesome killings, chlorine used to fill much more of our oceans. After meteorites hit the earth, Zimmer said all of the world's oceans would contain so much salt that they would all resemble the Dead Sea. Oxygen wouldn't be able to dissolve, and living organisms might not be able to survive.

Though swimming pools contain small fractions of the stuff, someone can easily get chlorine poisoning from swallowing too much pool water. Oh, but poor chlorine gets a bad rep because its effects on your body aren't that bad. According to The New York Times, chlorine can also cause hair damage but not necessarily hair loss. Apply constant conditioner. Or get a salt water pool. Yeah, maybe go with a salt water pool.

You've been warned, summer party people. You can swim. You can laugh. You can even float in an actual donut-themed flotation device. But your pool is — or might be at some point — trying to kill you.