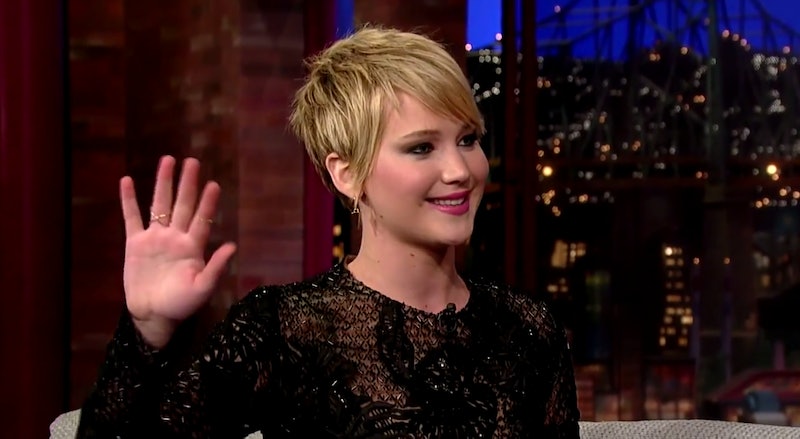 The Internet's best friend and real-life meme, Jennifer Lawrence, appeared on Late Night with David Letterman last night, and, as you can expect, she was an absolute delight. I cannot think of any other actress who could possibly make talking about diarrhea, ulcers, and endoscopies sound like puppies, rainbows, and flowers, but I suppose that's just the magic of Hunger Games: Catching Fire star Jennifer Lawrence — she's just that charming.

During Wednesday night's appearance, though, ulcers were in fact the topic of conversation. Lawrence, who was on the show to promote Catching Fire relayed the reason why she had to cancel a slew of morning show appearances recently. Apparently, she was hospitalized before the Catching Fire premiere in LA due to "severe stomach pains" that she thought could be an ulcer. Oh no, J.Law! Not to worry, though, as J.Law explained:

"I thought I had an ulcer and it turns out it was a fulcer," she joked. "I had this really bad pain for like three weeks and you can only shit your pants so many times a day before you say 'I have to go to the hospital.'" Words to live by. Lawrence continued that she went to the emergency room, where they told her she would have to get an endoscopy so they could see what the problem was.

"They were putting me to sleep and I can see the stuff like coming towards me and she was telling me 'think somewhere peaceful, think of an island. A lot of people have pleasant dreams' and I’m just like 'I’M PARALYZED!' Then I passed out and when I woke up she was like 'Jennifer did you have any dreams?' and I went 'I dreamed there was a nuclear bomb going off.'"

You know, if J.Law wasn't so busy winning Oscars and making movies for hit franchises, she would be perfect for reality television. Who else does stuff like this happen to?!

Anyway, you can check out the video below. And since we're on the subject, here are a bunch of GIFs of J.Law nailing other interviews, because our lives can never have enough J.Law GIFs.