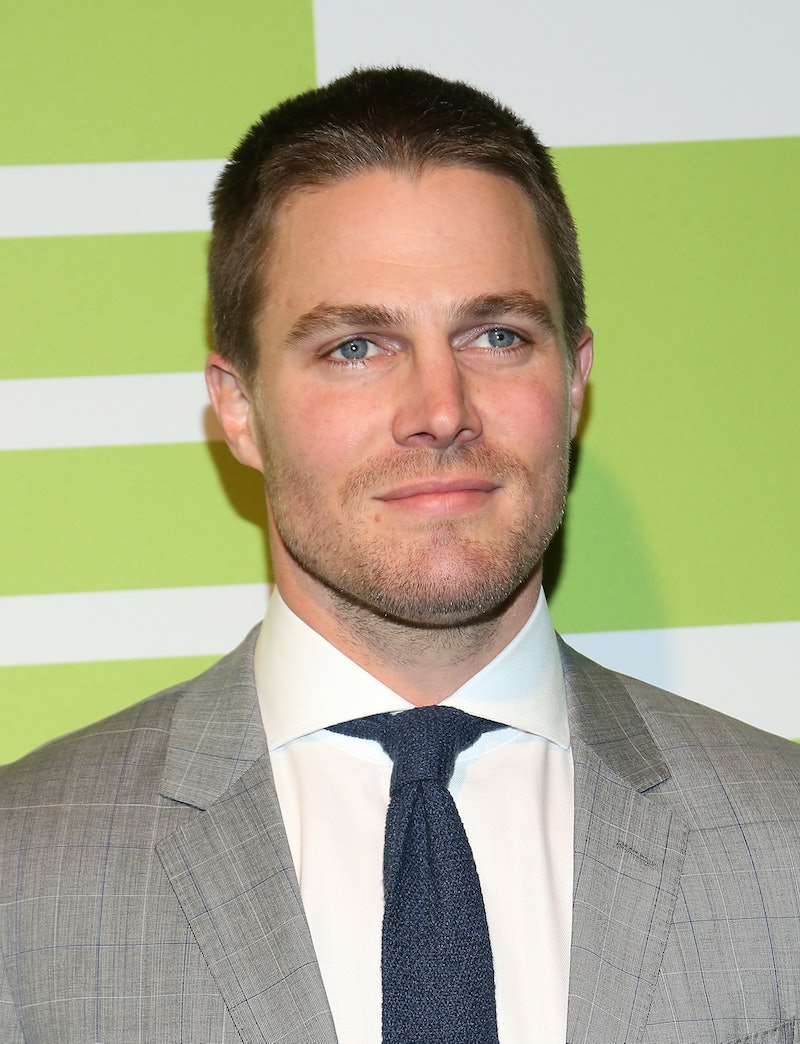 Things Stephen Amell did not do this weekend: Fail this city. The city, of course, being the actor's hometown of Toronto, where he solidified his place as most valuable citizen. More specifically, though, it's where Arrow star Amell hit a home run at batting practice with the Blue Jays on Sunday. Now, I don't exactly know what they do when they breed humans in Canada, but evidently, it's something incredibly right. Fellow Americans, please take note.

As anyone in his situation would do, the actor took to his Twitter and Facebook to show off his impressive skills. But, he wasn't the only one. The MLB decided that they too needed to make note of the wild accomplishment. And, in doing so, penned a cheeky tweet that read, "Green Arrow, aka @amellywood, goes yard during @BlueJays BP. As superheroes do. #Crushed." As superheroes do, indeed, Major League Baseball powers that be.

While his brooding alter ego may be busy on an especially romantic road trip with Felicity Smoak, it's clear that Amell is still trying to hold down the fort of awesomeness, hooded or not. Perhaps even more entertaining than watching the part-time baseball star achieve a very real full-time type of baseball job was reading the comments section of his Facebook video of the stunt. Especially, where former co-star and onscreen bestie, Colin Donnell, AKA Tommy Merlyn wrote, "You son of a bitch!!! Also nice shot you SOB." I mean, you'd think the rivalry would be squashed by now considering Tommy's sad state, but, alas, some things never die.

Other comments of honorable mention? Facebook user, Drew Martinez wrote, "Don't submit to a drug test. Might test positive for mirakuru." I, like Martinez, am beginning to wonder whether or not there's actual truth to that statement. And, another Facebook user, Orlando Perez, aptly changed his longtime mantra stating, "I used to want to be Batman when I grew up, now I want to be Stephen Amell." Which is probably a better idea, anyway, considering that Batman isn't, ya know, real.

You can grab your popcorn and check out the video of Amell hitting a homer below:

The only fitting reaction to that display? Well, let's let Felicity handle that...