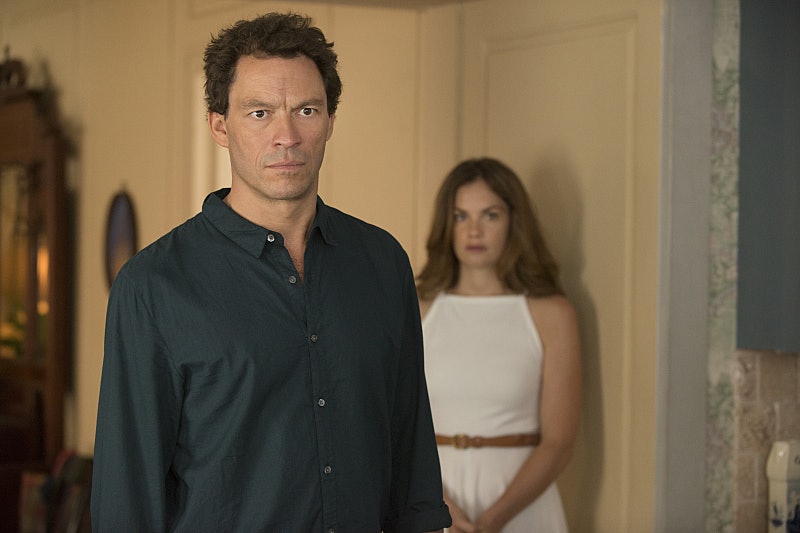 William Shakespeare once wrote, "The course of true love never did run smooth," and that's truly the case for The Affair's Noah (Dominic West) and Alison (Golden Globe winner Ruth Wilson). Their titular affair became a legit coupling at the end of Season 1 of the Showtime series, but there's more drama on the way. The Affair Season 2 trailer dropped and it shows that Noah and Alison's newfound bliss doesn't last long. After all, Noah was arrested for the murder of Scotty Lockhart last season, and their respective exes are still around to deal with.

While most TV shows and movies show love affairs as fun and illicit, The Affair has been praised for painting a more realistic picture of the emotions and consequences of an affair. The Season 2 trailer does allow a few happy — and sexy — moments for Noah and Alison, with him declaring (via voice over) to Alison, "You're the best thing that's ever happened to me." But life outside of the bedroom is a different story. It looks like Noah is still facing murder charges, Alison's hot-headed ex Cole (Joshua Jackson) returns, and Noah's ex Helen (Maura Tierney) doesn't want Alison near the Solloway children. Sounds like the happy couple will have a lot to deal with when The Affair returns to Showtime this fall.

Earlier this year, Wilson won a Golden Globe for her portrayal of Alison and she told Deadline that she's looking forward to continuing the story — and The Affair's exec producer Sarah Treem has the themes of the seasons outlined. "The second season is about the consequences, where the first was the about the sin, Sarah says," Wilson said. "The third season is the redemption...It’s really exciting because the whole story opens up and you see those consequences amongst more than just Allison and Noah."

Check out all the Season 2 drama in the trailer below, and get excited for The Affair's return this October.

More like this
'Black Mirror' Season 6 Is Reportedly In The Works, Here’s What To Expect
By Maxine Harrison
Everything To Know About 'The Circle' Season 5
By Gretchen Smail
What Does Michael Peterson’s Family Think Of 'The Staircase'?
By Arya Roshanian
Everything To Know About ‘The Handmaid’s Tale’ Season 5
By Amanda Whiting
Get Even More From Bustle — Sign Up For The Newsletter