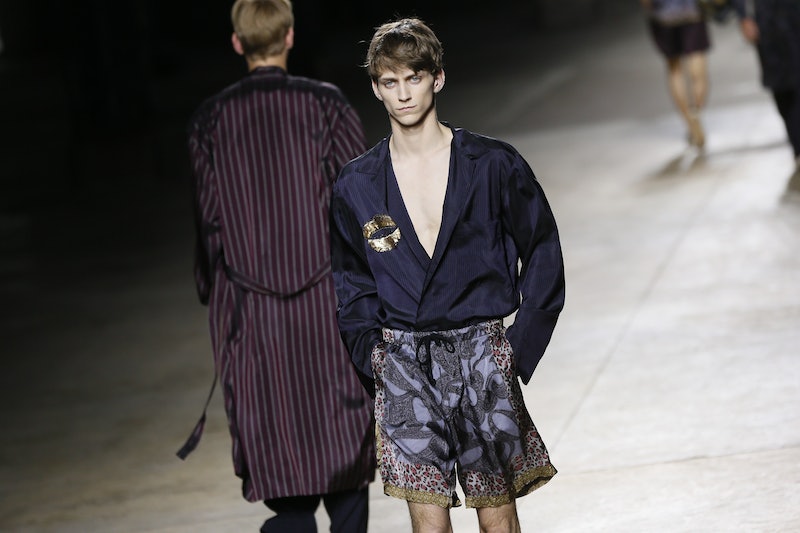 It's official: the pajama trend in fashion has officially made its way into menswear as shown in Paris this week during Men's Fashion Week. For Spring/Summer 2016, the loose fitting comfort of pajama-like wear is taking center stage in front of the skinny jean. Collections from several fashion houses made the pajama wearing statement. Dries Van Noten and Louis Vuitton featured robes and short pajamas in their walks earlier today.

The trend was also spotted on Dolce & Gabbana and Versace in Milan and is already making its way into the front rows of the fashion weeks as GQ fashion editor Gary Armstrong was spotted wearing a two-piece set.

The trend comes with a certain ease that allows men to pair coordinating tops and bottoms that already match and are ready to wear together. Co-ords are a lasting trend seen in womenswear that function off that same appeal.

The pajama trend is part of the larger trend of loose-fitting dressing as Damien Paul, head of menswear at MATCHESFASHION.COM, detailed to The Guardian:

“It felt in step with the general movement towards undone dressing that we’ve been seeing for the last couple of seasons.”

Check out the looks from Louis Vuitton. I know my husband would be happy to wear an outfit like this - straight from the bed to his everyday look without any changing necessary.

Heck, I wouldn't mind that sort of style either. Bring on the PJs, guys!