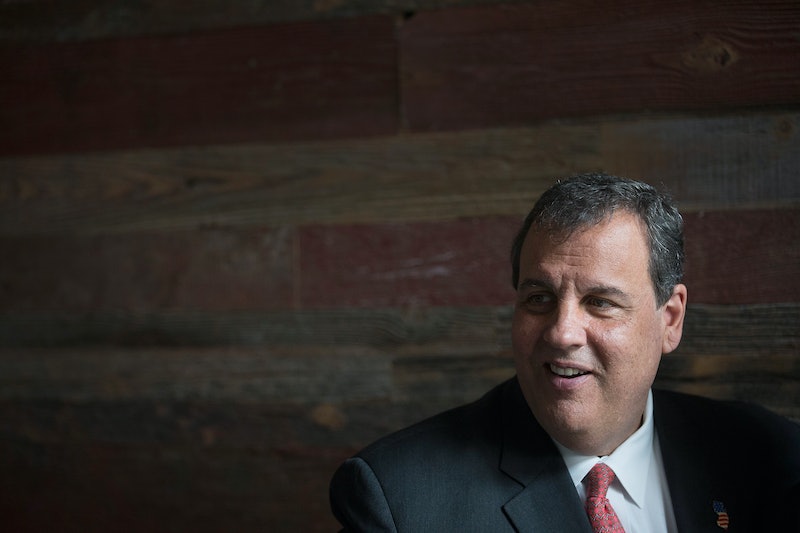 After declining to throw his hat into the ring for the 2012 presidential race, and after months of speculation, Chris Christie will announce his 2016 campaign on Tuesday, The Wall Street Journal reported. But ahead of the launch, the New Jersey governor unveiled his official campaign website on Saturday, whose slogan insists that Chris Christie is "Telling it Like it Is." In some ways, it's a fitting tagline for him, who is known for his direct, often blunt speaking style. For example, there was the time Christie told a heckler to "sit down and shut up." Or the time he called a New York Daily News sports writer a "complete idiot, self-consumed underpaid reporter."

While many appreciate Christie's brusque style — he was reelected to a second term as New Jersey governor in a landslide — there have been plenty of times his sharp tongue has not worked in his favor. A poll earlier this month found his popularity has waned over the past two years. In 2012, Christie was the "hero" governor who steered his state through the aftermath of Hurricane Sandy, but in 2015, he's still haunted by the scandal over bridge closures in Fort Lee. Two Christie advisors were indicted in May on charges they conspired against the mayor of Fort Lee, who wasn't a Christie supporter, by scheduling a bridge closure that led to massive traffic problems for that community.

So does Christie always "tell it like it is?" Here are a few times his trademark bluntness went a little bit awry.

OK, so this one was blamed on auto-correct, but it's still funny to think that someone on Christie's staff had the word "bongs" saved in their iPhone. The tweet, which read "We need to work together on bongs that have gone wrong..." was deleted shortly after it was posted, but obviously, nothing is ever really "gone" from the Internet.

That Statement He Made About Same-Sex Marriage

Time magazine reported Christie made his stance on gay marriage pretty clear in 2011 when he said "I am not a fan of same-sex marriage. It's not something that I support." The question for Christie now, is how will his campaign handle this issue, now that same-sex marriage is the law of the land?

That Time He Ate A Doughnut On Letterman

Like him or not, Christie is the subject of a lot of pretty cruel fat-shaming. He's even been questioned whether his size made him unfit to be president. He was often the target of jokes by the now-retired late night television host David Letterman (as well as Letterman's fellow late night-hosts, and Saturday Night Live). So in an appearance on the Late Show in 2013, Christie started eating a doughnut during the interview, to Letterman's surprise. If anything, it showed Christie had a sense of humor. But he announced not long after that he was undergoing weight-reduction surgery, which seemed to contradict his statement to Letterman that he was "the healthiest fat guy you've ever seen in your life."

That Time He Tried To Distance New Jersey From Jersey Shore

It's apparent that Christie was not a huge fan of the now-defunct MTV show Jersey Shore and its rather colorful cast members. In 2011, he called the cast "losers" who weren't even from the area. "They’re from New York. Snooki is from Poughkeepsie. 'The Situation' is from Staten Island. They parachuted these losers into New Jersey. And they want to make all of you believe that they’re in New Jersey. They’re not." In fact, only two of the eight main cast members were New Jersey natives. In 2013, Christie had an awkward face-to-face meeting with Snooki. The two did not become BFFs.

Despite public health experts saying there was no need to quarantine nurses and doctors who were exposed to the Ebola virus, in October, Christie ordered nurse Kaci Hickox to be isolated in a tent at a Newark hospital. Hickox had spent time treating Ebola patients in Africa, but was not herself infected. She threatened to sue Christie for his actions, and his response, according to NBC News was, "Whatever. Get in line. I've been sued lots of times before. I'm happy to take it on." He also challenged Hickox's version of events saying she was being treated in a climate-controlled area of the hospital with "take-out food from the best restaurants in Newark."

He would probably need to be a little more diplomatic responding to threats of lawsuits if he were in the Oval Office.