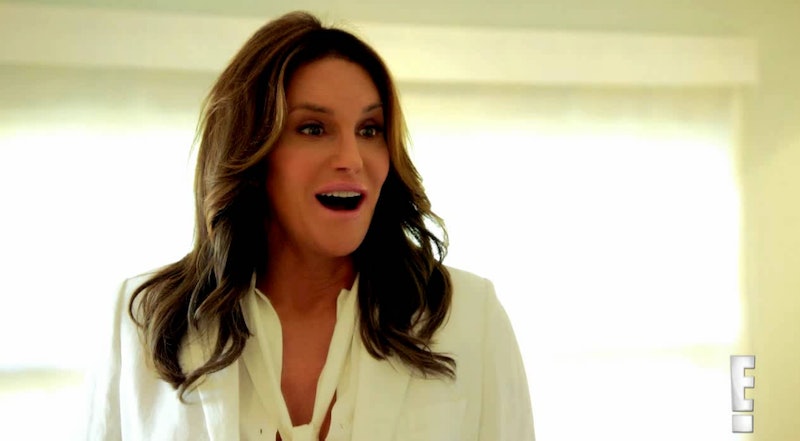 It's been a pretty amazing weekend and it's only getting better. Sure, it's hard to top one that was kicked off by the Supreme Court removing all bans against same-sex marriage, but let me give you some news that just might bring you even more joy. Caitlyn Jenner attended a Pride event in New York City and got the warmest, most jubilant reception from the crowd. Several attendees posted photos and videos of Jenner's appearance on Instagram and the amount of happiness expressed on both sides is just beautiful.

Jenner made the appearance at the PH-D Rooftop Lounge in the Dream Downtown Hotel in the Chelsea neighborhood on the same day as NYC's legendary Pride parade, Jun. 28. She entered to plenty of applause and cheers, as shown in this video taken by Instagram user Dan Steele Green, the event's host. Other photos posted by onlookers show Jenner taking a selfie (or a pic of the supportive crowd) and just looking plain gorgeous. According to US Weekly, she had a great time chatting and dancing with the folks at the event and actress Candis Cayne even dedicated the song "I Am Woman" to her. All together now: Aww!

In a world that isn't always filled with acceptance and love, it's so great to see so much of it alive and well in an event like this, and Jenner looking so happy.

Jenner began publicly identifying as female and using female pronouns earlier this month. She shared with Vanity Fair about how she spent many years struggling with her gender identity, worried about what the reaction would be from the public. So far, much of the response has been positive, and Jenner appearing in public — to promote LGBTQ causes, nonetheless — is a wonderful thing. It's great to see one of the community's most prominent figures showing her support and fighting the good fight.

A thumbs up indeed.