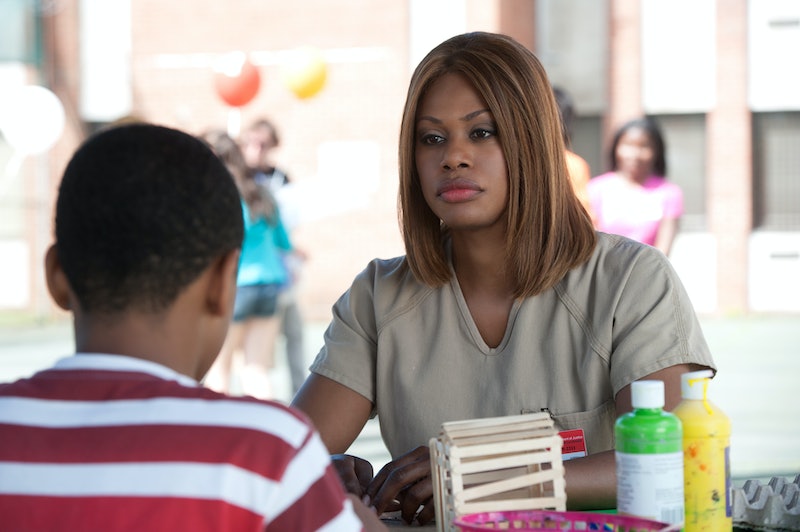 A the end of Orange is the New Black Season 3, Sophia winds up in the SHU, or Security Housing Unit, or Shoo, or Shoe, or whatever you want to call it. She's in solitary confinement. We know how she wound up there — a scuffle with another inmate, and she was taken away for her own "protection — but how did she end up in Litchfield in the first place? Why is Sophia in prison on Orange Is The New Black? To get to the bottom of her story, we've got to go back, waaaaaay back, to her flashback episode. (Her flashback episode is also the best titled episode of OITNB ever, "Lesbian Request Denied.") So what happened to Sophia to land her in prison?

Pre-Litchfield, Sophia was presenting as a man named Marcus. Sophia is a transgender woman, and prior to her prison life, she worked as a firefighter and was married to a woman named Crystal. She began her transition before entering Litchfield, and as Sophia learned the hard way, gender confirmation surgery is expensive. She needed a way to finance her transition, and not wanting to burden her wife, or their life in general, Sophia entered into petty crime, namely, credit card fraud.

The fraud started when Sophia was living as Marcus. Marcus was often in destroyed houses in the line of fire fighting, and often times there were valuables left behind. That's when Marcus started gathering up credit cards, not thinking that the homeowners would notice they were gone — their houses had just been ransacked by fire, after all. Boom: Surgery fund.

Marcus then transitioned and began going by Sophia, and her wife, Crystal, stuck by her the entire time (though, Crystal was wholly unaware of the fraud-financing plan). Crystal's a good woman, and still loved Sophia through all of this.

However, there was one person in the family who wasn't too OK with Sophia's transition: her son, Michael. Michael did not like, nor really get, what was happening with Sophia, and continued to refuse to accept her. Michael still referred to Sophia as a man from time to time, really just twisting that metaphorical knife in her heart. And then, Michael really couldn't take it any more, and did the worst thing yet: He turned in Sophia for her credit card theft.

I get where Michael was coming from, really, I do. I understand that he was just a kid, and didn't understand the situation fully, or even the gravity of how serious Sophia's crime was. But did he have to turn her in? His move was out of spite, really. At the beginning of Season 1, Sophia mentions that she's already been in Litchfield for two years now, so in total, she's been there three years (because OITNB runs on a slower pace, and it's only been about nine or so months since Piper got there). That's quite a penance to pay.

The Current State of Affairs

From her interactions with Michael, we can tell that she's forgiven him for what he did. He was just a kid. Michael, on the other hand, seems less and less accepting of Sophia, and that just breaks my heart into a million pieces. Hopefully, when Sophia gets out of prison, they can repair their relationship. Until then, Sophia's life is simply continued time in Litchfield and the SHU.

More like this
Twitter Is In Tears After *That* Jack & Randall Parallel On 'This Is Us'
By Grace Wehniainen
'Black Mirror' Season 6 Is Reportedly In The Works, Here’s What To Expect
By Maxine Harrison
What Does Michael Peterson’s Family Think Of 'The Staircase'?
By Arya Roshanian
Everything To Know About ‘The Handmaid’s Tale’ Season 5
By Amanda Whiting
Get Even More From Bustle — Sign Up For The Newsletter