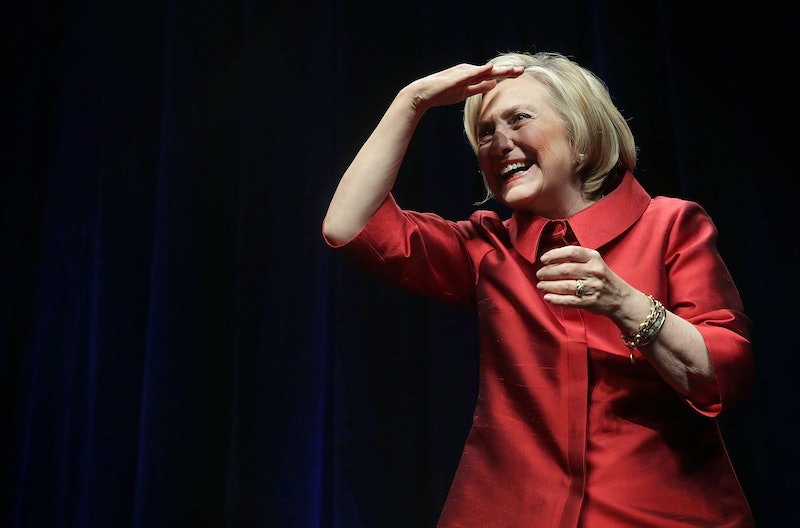 When Hillary Clinton made her first southern campaign stop in Columbia, South Carolina, in May, you could hear a subtle southern drawl in the way she said her "Rs" and "As." Although she's an Illinois native and not an actual Southerner, Clinton has a long history of using different accents. In fact, she has a long history — try about 40 years — of transitioning her accents as she moves from each public office position throughout her political career.

Hillary Clinton, who's now running for president, isn't the only politician to change her accent through different regions of the United States. President Obama recently spoke to Jamaicans in a spot-on Patois impersonation and Anthony Weiner adopted a Caribbean accent while dancing around in New York's West Indian Parade. But what makes Hillary so unique is that her several adaptions of different accents has grown with many young millennials. Even Bloomberg Politics examined the former first lady's accent over the years in a spectacular video.

Whether it's pandering to her voting base or a habit of mimicking the people around her, there is still a compelling fascination in her attempts to appeal and relate to her base for vote courting. Here's a timeline of Clinton's accent throughout her long political career.

When Clinton, then the first lady of Arkansas, was elected as chair of the Arkansas Educational Standards Committee in 1983. she adopted an accent that resonated with the inland southern states. As linguists Bill Kretzschmar pointed out to Bloomberg Politics, her voice slightly fluctuated when she said "education" and her "i" elongated as she said "society."

In 1987, Clinton shortened the long "i" in "society" in a speech, giving her accent a subtle southern twang.

Clinton's accent made a subtle change in a 60 Minutes segment. When talking about the allegations that her husband then-president Bill Clinton may be having an affair, her pronunciation of words like "meteor," "man," and "Tammy Wynette" had a relaxed drop of elongation that gave her voice a hint of a Southern drawl.

This is probably the closest we'll get to understanding Clinton's true-born accent. Growing up in the Chicagoland area, the "a" in her words became a bit more harsh and elongated in words like "ideas" and "hard." The "o" also had a harsher "ah" sound when she said words like "solid."

In this clip, Clinton's Midwestern accent became a bit more distinct when the "o" is elongated into an "oh" as she says the word "point." Think of the "oh" in "Minne-SOOOH-ta."

When Clinton made her first campaign stop, she went reverted back to her own southern twang for her supporters in South Caroli-nah and has been coloring her haaair for years.