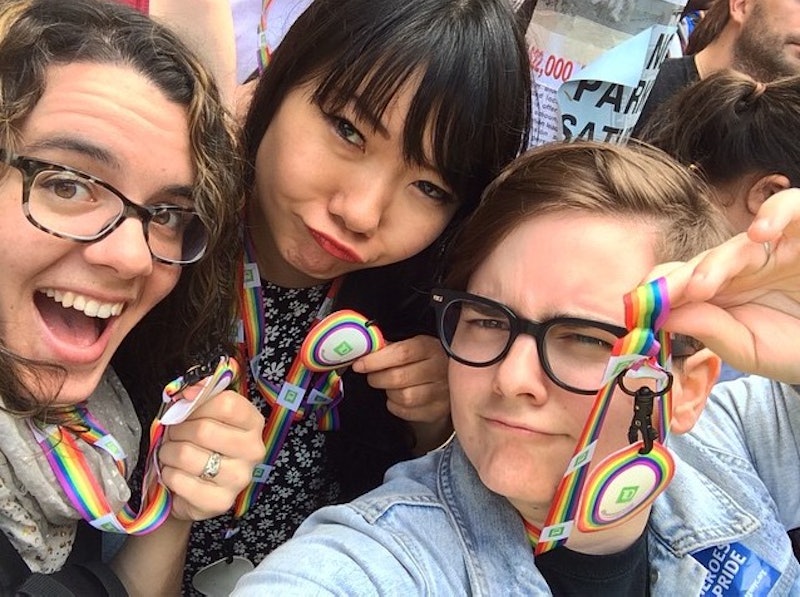 After planting a kiss on her girlfriend and hamming it up for the camera, Jenniq got serious for a moment and appeared to experience an internal, revelatory tectonic shift. "This is," she said, trailing off for a second, "the first day of freedom." Take that life-changing realization and multiply it by some one million people and that was the collective mood at the 2015 New York City Pride Parade. This year, the event, which took place just two days after the Supreme Court ruled gay marriage a constitutional right in all 50 states, was truly monumental. While some expressed a gamut of emotions — just like Jenniq — from exuberant to quietly touched, every feeling came from an overall sense of elation and, yes, pride. For the first time ever, the New York City Pride Parade was a celebration of love's long-awaited victory, and I am a changed person for having participated in it.

Sunday marked the 46th Pride Parade in New York City, officially known as the LGBT Pride March, which kicked off in 1970 after a police raid on the legendary gay bar Stonewall Inn galvanized the city's LGBT community. Every year since then, the Pride Parade has been going strong under the leadership of Heritage of Pride (HOP), a nonprofit organization that orchestrates the annual Pride events in New York City in commemoration of the Stonewall riots of 1969. But this year is particularly special because it's the first Pride Day on which every couple in every state of America is free to marry.

On Friday, in a 5-4 vote, the Supreme Court legalized gay marriage in all 50 states. Millions of LGBT citizens collectively cheered at the decision, particularly those in the 13 states that still had gay marriage bans, bans that have now been effectively struck down. I remember exactly where I was and what I was doing when I heard the news: I had the day off and was getting ready to go to the beach with my friend from out of town, and upon reading the news via someone's Instagram, I let out the loudest "Wooooooooot!" of my life. In reality, there were probably a few more "o"'s in there.

Others I talked to at the parade told me they had similar jubilant reactions. Travel editor Jena Tesse Fox found it hard to go back to work after hearing the news.

I was in my office and I was writing an article and suddenly my phone was buzzing with texts and Facebook posts as everyone was announcing the news. I was trying to get work done and all I wanted to do was run out into the street and start jumping around. It was wonderful.

Some said "screw work" and sat glued to their computers waiting for the news to be announced. Chanti Burnette, 26, a digital production editor at Kaplan, even had her social media locked and loaded.

Though this was my first Pride Parade (I have an aversion to large crowds and usually avoid parades like they're Times Square), it definitely won't be my last. It was the first time I felt comfortable being surrounded by so many people, simply because the joy of the occasion outweighed any discomfort I might have normally experienced. Everywhere I turned there were displays of overwhelming love, friendship, and pure glee between people from all walks of life, some representing a specific LGBTQ community and some who were just your typical New Yorker.

But even if you're just another suit who works a corporate job in Midtown, you're still part of a community, and that's what this day is all about for Jena, who told me:

Before today, I had never really thought of myself as being part of a community, but being among the crowds at the Pride Parade, I couldn't help but feel that I was part of a great one.

While Jena's message is undeniably beautiful, Pride Day means something unique to everyone. When I asked what the day meant to Eric Delgado, 26, who bravely came out to his family just three months ago, he told me:

For me, personally, it is all about equality. For me, coming out of the closet recently to my brother, it was a very big thing for me. It's something that I have been waiting to do for a very, very long time, especially coming from a very strong Catholic background. So today is really just about equality for everyone — straight, transgender, everyone.

When I asked whether he had any plans to marry anytime soon, Eric responded:

Not at the moment, but it’s nice to know that if and when I do, I can.

That is invaluable reassurance, indeed. But does that make the occasion any less meaningful for married couples? Not even a bit, says Chanti and Emelie Burnette, 26, copy chief at Who What Wear. To them, the institution of marriage should be a decision between the couple and the couple alone. Chanti explained:

I feel like I've never really understood the people that are oppositional to gay marriage on religious grounds, because to me it’s just such a personal thing. It’s a personal connection you have with someone else. To me, it’s just about finding the person that makes you a better person and living your life with them.

I just always pictured myself getting married and it seemed silly that something as simple as my wife being a woman would be a problem.

After all, she said, "Like any sort of milestone you go through, marriage is one of those." And nobody should keep you from achieving your milestones.

Another indicator of the monumental significance of this year's Pride Day was a man who traveled 10,000 miles just to participate in the New York City Pride Parade. Australian native Ross Bennett, 50, is currently on what he calls "an international Pride tour," and New York was just his latest stop.

I was in the Castro [in San Francisco] last night, which was a great place to be when that decision came through. It's New York this week and the week after, it's London, so, you know, it's the international Pride tour.

Why fly halfway around the world just to cheer in a few parades? Hope.

It’s a great day to celebrate marriage equality in the United States. We’re still waiting for it back home in Australia, but it won’t be long. So it’s a day of hope, I suppose.

While many in the international community are still waiting for marriage equality, some of the older-generation here are still in disbelief that the wait in the U.S. is over. Gena Brooks, who is Jenniq's girlfriend of two months, said:

Emelie also commented on the generational disparities in the gay rights movement, acknowledging that she and her wife were fortunate to have been born into a world that had already made vast progress.

I feel really fortunate to be in this young generation when this legislation passes. I know so many older people who never thought they'd see this day.

I have a lot of respect for the older generation — I have an aunt who’s gay and lived through the '70s and had a lot of shitty experiences — so I feel like we're celebrating on their behalf as well.

Jena also noted the significance of this watershed moment in history.

This is our generational step. My parents got to be there for the civil rights of the ‘60s and ‘70s, and the 1964 signing of the Civil Rights Act. This is our version of that.

Just as it's now baffling that the black community once had to fight for equal rights, it will one day seem absurd that this landmark decision didn't come sooner than 2015. Unfortunately, as with the fight for racial equality, the black community's fight did not end with the signing of the Civil Rights Act. In light of recent events in Ferguson, Baltimore, Charleston, and elsewhere in the country, it's clear the fight is far from over. And the same can be said with the gay rights movement.

As graphic designer Yoni Weiss, 25, pointed out, marriage equality is still only scratching the surface and despite how landmark SCOTUS' decision is, it doesn't erase a grim reality that still exists.

Marriage equality is lovely, but it's a privileged right. It's top-down equality in the sense that it is really only going to affect the relatively affluent and the already safe members of the community. In many states it remains legal to discriminate against sexual orientation and gender identity in employment and housing. Many families that evict their children to the streets for identifying as LGBTQ face no legal opprobrium. It [marriage equality] is nice and necessary, but for a transgender teen living on the streets and contemplating suicide because of family rejection and bullying at school, it counts for precious little.

However, that's not to say he isn't thrilled about marriage equality and what it means for the movement.

It's a great victory, and I'm proud and happy for how hard people fought for it. Perhaps a snowball has already begun towards legislation that will go on to protect the rest of the community. Perceptions are definitely changing and hopefully this will help bring plenty of visibility to the plight of the disenfranchised.

Indeed, this is an important takeaway from the celebrations at Pride Day. Marriage equality is major, but it's just another step along the way to absolute equality. But what a colossal step it is.

So what does Pride Day mean for me? Even though I am of the younger generation — or at least on the edge of it — it feels like I've witnessed a lifetime's worth of change unfold before my eyes.

University of Wyoming student Matthew Shepard, who was gay, was murdered when I was a sophomore in high school. His story changed me forever; it blew away the sugar coating through which I had viewed the world and revealed a pretty sobering reality. But along with that brutal realization came a desire to enact change. Following the news of Shepard's death, I decided to participate in my high school's Day of Silence that the Gay-Straight Alliance student organization organized every year. The day is meant to honor and raise awareness for LGBT students silenced by discrimination, harassment, and bullying in schools.

For me and many others, it would be the first time we'd be able to show our support for LGBT rights in some official, organized capacity, and I couldn't wait. But when I asked my friend if she would be participating, she gave an immediate and sharp "no" as if the very question offended her. (I knew right then that our friendship had a short lifespan.) Of course, she only motivated me to participate in the Day of Silence even more, but that "no" has stayed with me to this day, as a reminder of not just the intolerance that still plagues our society, but the indifference that paralyzes us. Through the years, just thinking back on that memory would fill me with anger, sadness, and hopelessness.

But on Sunday, that "no" was eradicated from my mind. What I witnessed forever invalidated and overturned what that "no" represented for me. What I witnessed was a society of people who were anything but intolerant or indifferent. To go from seeing fellow students not give a damn about victims of hate to being surrounded by people who embody love — love in all its forms — felt like my personal lifetime of progress. This Sunday, I didn't stop smiling for four hours straight. But as it came to a close, I became serious for a moment, recognizing that I had also experienced a tectonic shift of my own.