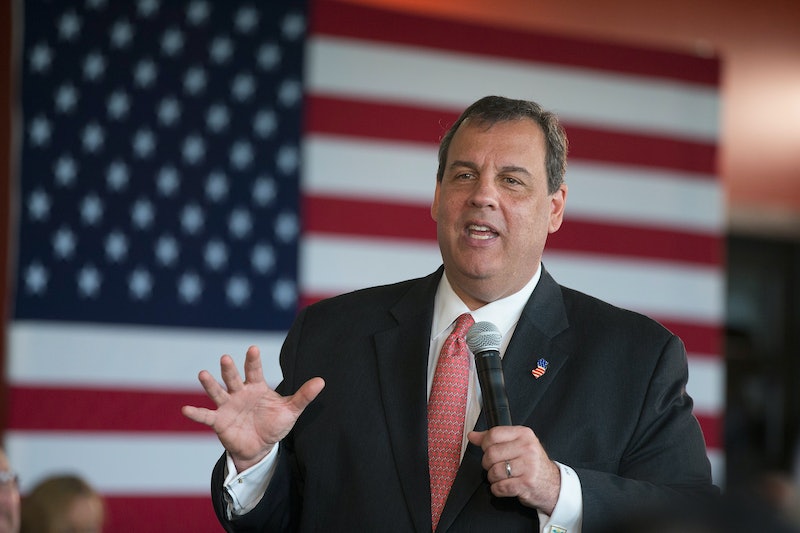 And that makes 14. On Tuesday, Chris Christie announced he's running for president via an email to supporters, making him the 14th Republican to make a run for the White House. Yes, there have been plenty of GOPers that have come before him with platform promises and strange campaign logos, but Christie's candidacy has been long expected. In what will be the weirdest and most exciting Republican primaries in recent memory, the colorful and controversial New Jersey governor will be a booming voice that will at least make for great television. "Today I am proud to announce my candidacy for the Republican nomination for President," he said Tuesday morning.

The official word may have come Tuesday, but Christie began teasing his announcement on Saturday after he launched his campaign website under the slogan, "Telling It Like It Is." Late Sunday evening, he released a video in which you see Christie talk with a group of supporters about how his Irish father and Sicilian mother taught him there was "no suffering in silence" in his family, which meant everyone was encouraged to speak their mind. Christie said if his mother were still alive, she would give him this piece of advice, which he describes as his "moral compass:"

In a trusting relationship, you don't hold anything back. And if you're going to run for president of the United States, and you're going to ask these people for their vote, that is the single most trusting thing they can do as a citizen is to give you their support. So you better tell them exactly what you're thinking and exactly what you're feeling.

"Telling it like it is" is actually a pretty accurate mantra for the outspoken governor, and it has sometimes worked out for him. His one-liners blasting President Obama have often rallied Republicans. Christie notoriously told POTUS to "cry me a river" after Republicans took back the House in the 2010 elections, making Obama's ability to push forward legislation more difficult. But Christie has also gotten plenty of slack for his unfiltered mouth. He made headlines in 2014 when a heckler blasted him for lagging on Hurricane Sandy relief, to which Christie yelled, "Sit down and shut up." Some saw them as bullying words.

But one of the biggest hurdles that Christie will need to overcome are his favorability numbers that have dramatically dropped as of late. According to Politico, Christie has an approval rating of 30 percent in his own Garden State as of June. With so many other candidates to choose from, Christie needs every vote he can get. His inability to lock down crucial counts in his own home state is a blaring sign that his campaign could be in trouble from the get-go.

Bridgegate is also still a very real issue in whether Americans can trust Christie. The Republican was cleared of any wrongdoing in the bridge scandal, but just in May, two officials connected to Christie were indicted for creating the major traffic jam on the George Washington Bridge in 2013. The political play was reportedly aimed to punish Fort Lee, New Jersey, Mayor Mark Sokolich for not supporting Christie during his last reelection campaign.

Yes, Christie makes the 14th Republican candidate, and for that reason, him "telling it like it is" might be the only real way to grab people's attention in this GOP circus. Let's see how many more Christie quotes we'll get in the coming months.