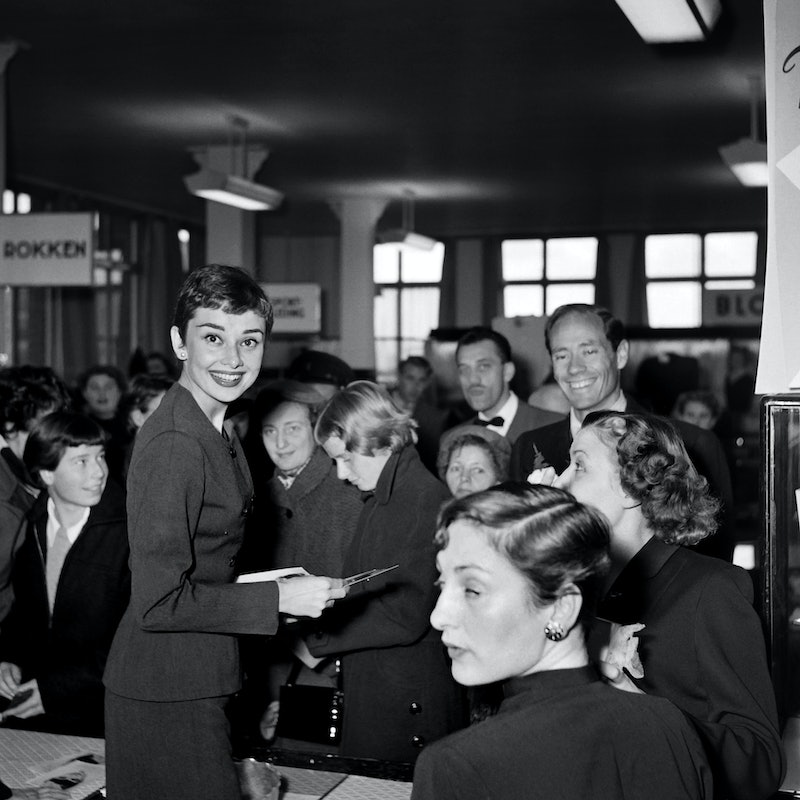 When I try to conjure an image of Audrey Hepburn at home, or picture Audrey Hepburn's diet, I can't help but see Holly Golightly crouching in front of her fridge with nothing in it except a carton of milk. But the reality is quite different from what Hollywood shows us, and, in actuality, Audrey Hepburn loved to cook at home.

One person who regularly sat down for Hepburn's meals was her son Luca Dotti, and his new book Audrey At Home: Memories of My Mother's Kitchen tells the story of his mother's life through food and recipes — specifically, her recipes. Although she had instructions for "impressive and ambitious dishes ... these never made their way to our dining table. For, in the kitchen, as in life," writes Dotti in the book's introduction, "my mother gradually freed herself from everything that was superfluous, to keep only what truly mattered to her."

This included good, fresh food, and what Hepburn liked to cook and to eat was a reflection of her experiences, her preferences, and her life. She embraced her role as a housewife, a mother, a wife, once saying, "It's sad if people think that's a dull existence, but you can't just buy an apartment and furnish it and walk away. It's the flowers you choose, the music you play, the smile you have waiting. I want it to be gay and cheerful, a haven in this trouble world."

Dotti's Audrey At Home is a loving tribute to a mother who wanted to keep a happy and well-fed home, and an intimate portrait of an icon, all told through food. If you want to emulate Hepburn's grace and poise in your own kitchen, here are seven tips to eat and cook and entertain like Hepburn did:

Eat at Breakfast Every Day…

Hepburn kept a rigorous schedule, often waking up around 4 or 5 in the morning to go over her lines and get her strength up for the day. But every morning, she ate her breakfast, often a caffe latte and a madeleine, and according to Dotti, "She never skipped it, not even on her monthly 'detox' day when she ate only plain yogurt and grated apple."

One of the small luxuries Hepburn would afford herself was breakfast in bed on Sundays, with "homemade madeleines, quince jelly, or cherry jam, along with toast, coffee, milk, butter, a small rose from the garden in a tiny vase, and on the side of her tray the International Herald Tribune."

...and End Every Evening With Chocolate

Hepburn believed chocolate "helped 'banish sadness,'" but chocolate also held a special place in Hepburn's heart and memories. She grew up in Nazi-occupied Amsterdam, and by the time the liberating forces came in 1945, over 22,000 of her fellow Dutchmen had died of starvation. Hepburn herself "was sixteen years old, stood almost five foot six, and weighed eighty-eight pounds." Near the end of the war, a Dutch soldier gave her seven chocolate bars which she instantly devoured but the felt sick. But still, "That moment remained the most vivid memory of the joy of liberation."

The love for chocolate lasted with Hepburn, and every evening, she had a little chocolate. One of her signature desserts was a flourless chocolate cake, which she regularly baked for her sons' birthdays and other celebrations, the recipe for which is included in Dotti's book.

La Paisible was Hepburn's home in Switzerland, and it was there that she lived her dream of a country home with a full garden. In Dotti's memory, there were always fresh vegetables and fruit in excess, even long after the growing season had ended and the Swiss winters had kicked in. "At La Paisible the seasons thus began to dictate the composition of our meals, with the exception of Mum's favorite sauce: Giovanni [the gardner] would pick the tomatoes in early July and freeze them whole, so they would be available throughout the year."

Dotti explains, "Mum was convinced that a good medley of colors was fundamental for all dishes. 'It isn't very interesting to eat something that is completely white,' she would argue, 'so it also can't be that good for you.'" This principle held as true with Hepburn's homemade curries as it did with her spaghetti alla puttanesca, which has a "vivid contrast of colors in the sauce (violet olives, green capers, red tomatoes, golden oil)."

Never Feel Guilty About Indulging in Your Favorite Dishes

"My organically minded mum, who hoed her own garden and favored pasta with sauce made from fresh tomatoes, had a semisecret passion for penne with ketchup," writes Dotti. She was particularly fond of eating it "while seated in an armchair in front of the TV," often while watching classic films or variety shows. Hepburn at plenty of gourmet meals, but was just as content with a simple meal like this and would go to lengths to make sure her favorite foods would be available. Dotti recalls a trip to Jamaica on which Hepburn packed a suitcase full of spaghetti, olive oil, and Parmigiano-Reggiano so she could make her beloved spaghetti alla pomodoro, which was her absolute favorite, at the drop of a hat.

Play with Your Food

Or at least with traditional recipes. Hepburn wasn't afraid to put her own twist on traditional dishes, like her Caprese salad, which included a slice of avocado in addition to the original tomato, mozzarella, basil, and balsamic vinegar. Once, while staying in the Swiss Alps, she was determined to make pesto, a fussy dish "that requires patience and discipline and tolerates no compromises with the raw material or the utensils that are used." Hepburn, however, couldn't find enough basil so replaced it with parsley. Dotti writes, "Mum's pesto has an entirely different character... The alternative cannot help but be a strange foreign blend." But everyone ends up asking Dotti for the recipe, which is also included in Audrey At Home.

Be Grateful for What's On Your Plate

Hepburn experienced starvation firsthand during World War II, and that experience colored the rest of her life. "My mother survived those days," writes Dotti, "and she considered her survival a gift that should not be wasted. She worked hard to get back what she had lost: home, family, and the security contained in the warmth of a kitchen." Hepburn's work as a goodwill ambassador for UNICEF, of which she was immensely proud, was to make sure children starving around the world today had the same opportunity to survive, and thrive, as she did.

More like this
The 20 Best Audiobooks To Fall Asleep To
By Aoife Hanna and K.W. Colyard
The Monster In 'The Essex Serpent' Was Inspired By A Real Local Legend
By Sophie McEvoy
10 Must-Read New Books Out This Week
By K.W. Colyard
Akwaeke Emezi’s Romance Is *The* Book Of Hot Girl Summer
By Shahed Ezaydi
Get Even More From Bustle — Sign Up For The Newsletter