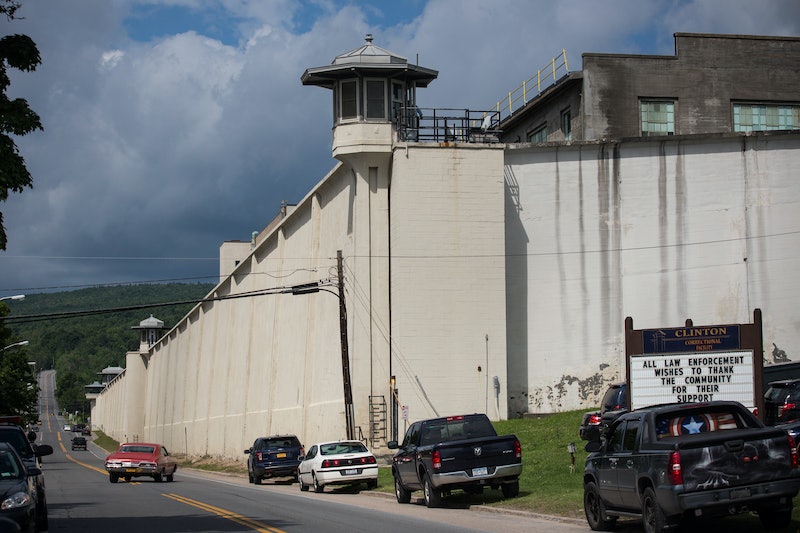 On Sunday, prison escapee David Sweat was shot by police and captured alive, bringing to an end a dramatic and winding three-week manhunt for the convicted murderer. Sweat and fellow inmate Richard Matt made an unlikely escape from Clinton Correctional Facility in upstate New York on June 6. Matt was killed by a tactical team on Friday, just 20 miles south of the Canadian border. Authorities are investigating the circumstances that allowed the two men to escape a maximum-security facility and among the questions to be answered are what will happen to Sweat now that he's been captured.

The Associated Press reported that Sweat would likely face new escape and burglary charges because of several break-ins that Sweat and Matt allegedly committed during their time on the run. It is unclear what plans officials have for holding Sweat, but a similar prison break from a New Jersey jail in December 2007 led to additional time to the escapees' sentences.

Sweat was already facing a life sentence without possibility of parole before the prison break for murdering a sheriff's deputy in 2002. So far, officials have not publicly stated whether Sweat would return to the Clinton facility, or if he would move to a super-maximum prison — the next step in security after maximum.

John Jay College of Criminal Justice professor Eugene O'Donnell predicted in an interview with NBC News that the conditions awaiting Sweat upon returning to prison would only make him more desperate to elude capture.

He is face to face with the reality that his life is over, which makes him very dangerous to anyone he comes in contact with [...] He's obviously in a desperate situation. If he was to be returned to prison, his conditions will be even more intolerable.

The two prison employees who reportedly helped the men escape will certainly face a host of charges for their part in the break. Officer Gene Palmer faces up to seven years in prison for allegedly giving Sweat and Matt tools to aid their escape. Prison tailor Joyce Mitchell has admitted to hiding hacksaw blades and drill bits in frozen meat and smuggling the tools to Sweat and Matt while they were still in the facility.

The story of Sweat and Matt's escape bore striking resemblance to The Shawshank Redemption, a story and book by Stephen King. In the book, the lead character is serving time at an upstate New York prison after a wrongful murder conviction. He finally burrows out of the prison through a tunnel that he spent years carving, leaving guards and police dumbfounded. Sweat and Matt smuggled tools into their cells and tunnel through a hole they made in the wall, leaving stacks of pillows and blankets to fool the prison guards. CNN reported that officials investigating the case believed Sweat and Matt took at least a year planning their escape, including persuading guards to help them and researching navigable paths through the woodsy area near the Canadian border.

The drama surrounding the escape mounted as the two men led state and federal investigators through a web of tiny towns in the Adirondacks in a cat-and-mouse chase that lasted for nearly a month. In the end, the reality of their escape was very different from the movie version. Matt was killed Friday afternoon, just 40 miles away from the prison walls. Sweat was finally captured in the town of Constable, New York, just below the Canadian border. The convicted murderer was shot twice in the back by a state trooper on Sunday before he could cross into Canada. Local police confirmed to an NPR affiliate that Sweat is being treated at the Alice Hyde Medical Center in Malone, New York.