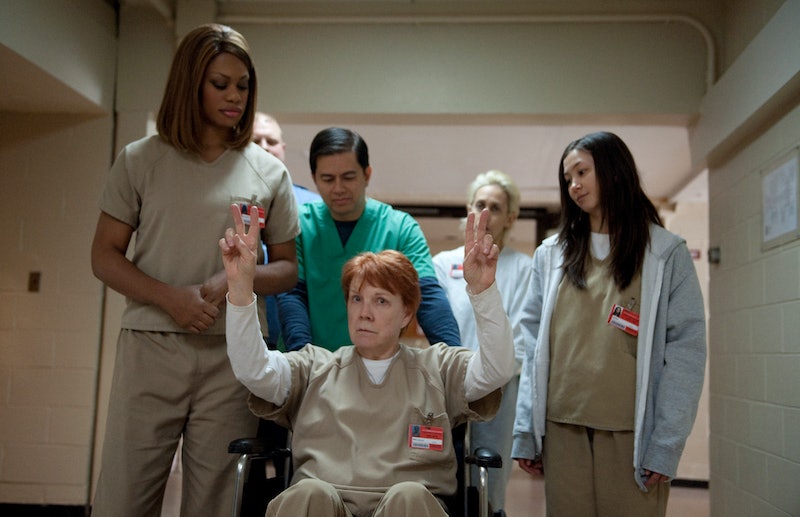 One of the best things about Orange Is the New Black is just how expertly it manages to pull a surprisingly badass backstory out of the most unlikely of characters. Take Season 1, when we learned that Litchfield's resident Catholic nun, Sister Ingalls, was in jail for political protesting. But when we got her full backstory in Season 2's "Take A Break From Your Values," it turned out that Sister Ingalls' past was even more intriguing: She was actually somewhat of a celebrity nun in the real world, who had gained fame both from her political activism, as well as from a book about her controversial demonstrations — the spectacularly titled, Nun Shall Pass.

The character of Sister Ingalls itself was based on the real Catholic activist Sister Ardeth Platte, who served two years in prison for her anti-nuclear protests. Just like Sister Ingalls, the real Sister Platte broke into nuclear facilities along with other nuns, in order to peacefully demonstrate their deep disapproval of nuclear technology. But while the protests may have been technically "peaceful" in that they were non-violent, Sister Platte's demonstrations were also quite gruesome. So goes an Associated Press report from a 2002 demonstration at a nuclear facility in Colorado:

The nuns cut a chain link fence surrounding a Minuteman III silo in northern Colorado, then used baby bottles to draw a sign of the cross in their own blood.

As a result of that bloody protest, Platte and her fellow nun compatriots were branded terrorists and arrested. But even after an early release in 2005, Sister Platte assured the AP that she still stood by her convictions. "It's my religious commitment ... I would never stand with this government in any kind of killing," she said at the time. In Season 2 OITNB, Sister Ingall's big reveal was that she was excommunicated from the Catholic Church — basically, kicked out — because of her attention-seeking antics and the "sexy" interludes she had her ghostwriter add to her memoir about protesting abroad.

But OITNB was a lot less critical of Sister Ingall's actions and makes the point that perhaps the satisfaction and even self-aggrandizing pride that comes with doing good can, in itself, be a good thing. Without Sister Ingalls' streak of arrogance, she'd probably never have been bold enough to stand up for Sophia (who ultimately became one of her closest friends in the prison), or take Brook's hunger strike and turn it into a borderline national scandal.

After making Sister Ingalls take more of a backseat in Season 3, I can only hope showrunners will reunite Sophia and Sister Ingalls again in Season 4, showing them working together once again to fight for Sophia's rights. And at the end of Season 2, it looked like those nuns were prepared to show up and fight for the obvious human rights violations happening in Litchfield, and they're always just a call away. But let's be honest, the Catholic Church hasn't exactly proven itself to be most progressive institution. Sister Ingalls may actually find herself forced to choose between sticking up for her BFF and having a place for her back in the habit (metaphorically speaking, at least) once she gets out of prison.

Of course, as a superfan of the more sappy Orange Is the New Black episodes, I'd love to ultimately see Sister Ingalls pick Sophia and watch the two of them take MCC down. But I know the show often goes bitter when you want it sweet, so I guess I'll just be watching nervously from the edge of my seat when the show comes back... a year from now. Sigh. It's going to be a long wait.