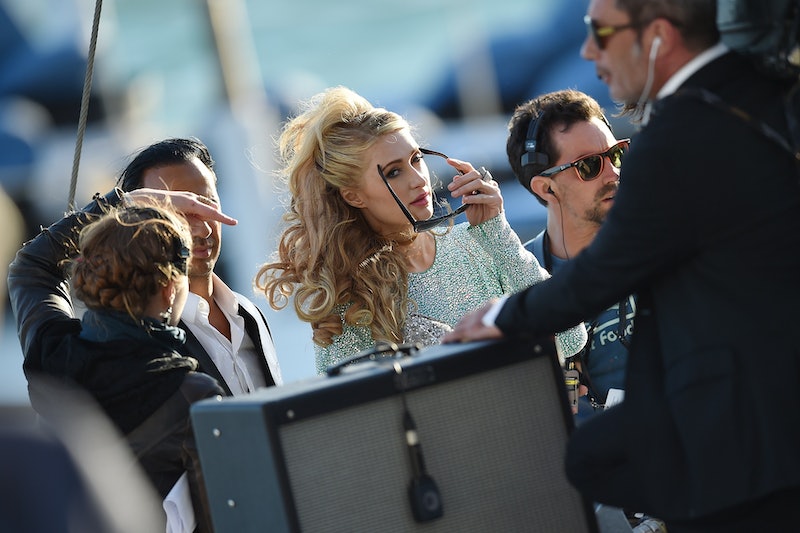 Maybe you're familiar with my stance on pranks, or maybe you're not. Generally, I'm super down for a good punk-ing. Anything that's a little bit goofy, that will result in the victim being embarrassed, but ultimately in on the joke is fine with me. Anything that is cruel, malicious, or leaves the prank-ee hurt or fearing for their safety is not OK. Ergo, it was not OK when an Egyptian TV Show pulled off an elaborate plane crash prank on Paris Hilton that made her think she was going to die. The "prank" came complete with a man (the pilot?) being thrown out of the plane in flight, and a lot of confusing yelling and screaming as the plane flopped erratically about in the sky.

I have to say, Paris held it together pretty well. She was crying and in clear distress, as anyone would be, and repeated asked "What is happening?" and "Why can't we just land?", but I swear if that were me I would have 100% soiled myself and then passed out. Once back on the ground, the TV shows host revealed the "prank" proclaimed his love for Paris and himself a bit "naughty". He was over the moon when Paris said their prank was more terrifying than anything on Punk'd, admitting that dying in a plane crash is actually her biggest fear. Slow clap for the prankster. You hit the nail on the head buddy. The prank is long, and difficult to watch:

Because I weirdly like Paris Hilton (she's from a much more innocent era of reality TV), and because I don't think anyone in the whole world who isn't some diabolical evil person should ever be pranked like this, here are some favorite Paris moments in gif form, because after being treated like that I think we should celebrate her a little bit:

1. For every time she made a sick Kim Kardashian burn

2. For the time she was Kim Kardashian's boss

3. For the time she had the best catch phrase on Paris Hilton's British BFF

4. For everything she did on The Simple Life

More like this
Ryan Reynolds Brought Some Famous Friends To Wrexham A.F.C's Last Game Of The Season
By El Hunt
Jake Daniels Just Became The UK’s First Active Football Player To Come Out As Gay Since 1990
By Sam Ramsden
Taylor Swift, Kerry Washington & More Speak Out On Uvalde Mass Shooting
By Jake Viswanath
Rebekah Vardy & Coleen Rooney’s Trial Has Officially Begun
By Bustle UK
Get Even More From Bustle — Sign Up For The Newsletter