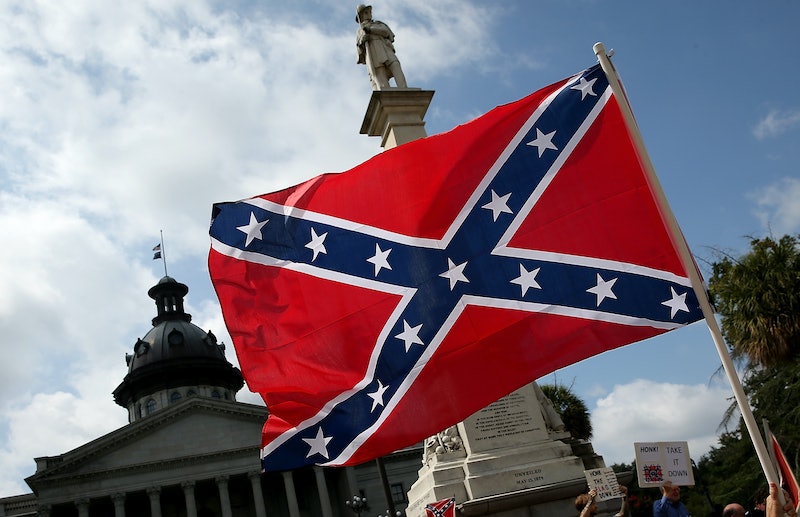 Debate about the Confederate flag has raged in the days following the June 17 mass murder of nine parishioners at Emanuel AME Church in Charleston. Many civilians and legislators—including President Obama himself—have called for the removal of the Confederate flag from South Carolina’s state capitol, and businesses including Walmart, Amazon, and eBay have vowed to stop selling Confederate flag-themed merchandise. Unsurprisingly, these calls to abolish the flag have caused an answering backlash from those who support the Confederate flag’s use. Video from this weekend, for example, shows a Confederate flag parade being held in Georgia—and it goes rather deliciously awry.

The video, posted yesterday by Live Leak, shows a parade of cars bearing Confederate flags traveling down the road in Dalton, Georgia; there are police cars parked nearby to block the road. The man filming remarks, “They’ve got a goddamn day for Confederate fuckin’ flags. This is some bullshit. I wonder what kind of motherfucking parade we can have? … They get the roads blocked off.” Shortly thereafter, one of the trucks rear-ends the one in front of it, and that one hits the one in front of it. The man filming exclaims, “God don’t like ugly.”

Obviously, I hope no one was hurt in the accident (the wreck does not appear to be particularly serious), but it’s hard not to feel a sense of poetic justice as these Confederacy-loving drivers mess up their own parade. In the wake of the devastating Charleston shootings and the resulting debates about racism, violence, and the power of symbols, there hasn’t been much to laugh at. We’ll take a little levity where we can find it.

Here’s the whole thing (watch with the sound on, because the guy narrating is gold):

More like this
How The City Healed Five Years On From The Manchester Arena Attack
By Ella Glover
10 Times Boris Johnson Got It Wrong On Trans Rights
By El Hunt and Sam Ramsden
How To Protect Your Digital Privacy If You Need An Abortion Post Roe v. Wade
By Kaitlyn Wylde
How To Support Gun Control Reform Right Now
By Morgan Brinlee and Carolyn Steber
Get Even More From Bustle — Sign Up For The Newsletter