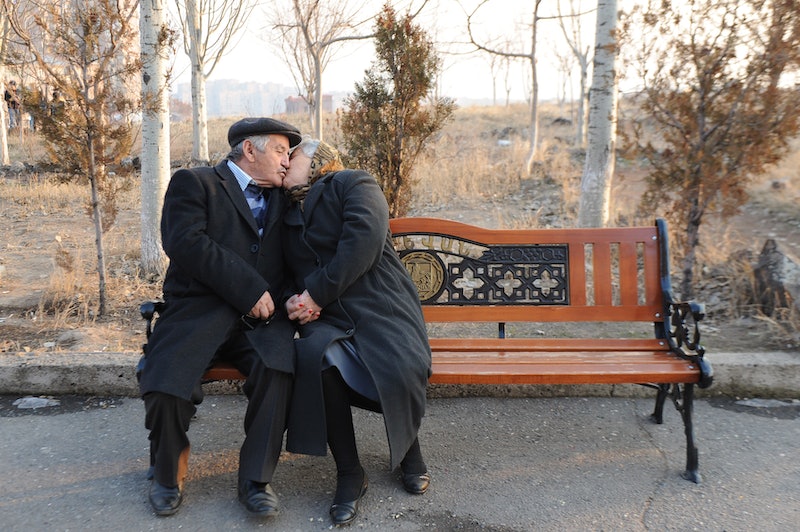 If you're grossed out just thinking about gramps and gram doing it, you're not alone. In his book 30 Lessons for Loving: Advice from the Wisest Americans on Love, Relationships, and Marriage , gerontologist Karl Pillemer explains that it's common to be turned off by the idea of intimacy between older people. He traces that feeling back to some pretty early memories — catching your babysitter making out on your family's couch when you're a kid, for instance. When you're in footie jammies, your reaction isn't to usually to think, "How sexy." Your feeling was more like, "EWWWWW."

But just because our grossed-out reaction may be rooted in something that's probably biologically advantageous, we still have a lot to learn (yes, sexually) from couples who've been together for decades. Pillemer's book collects opinions from "the experts," a group of more than 700 Americans who answered questions about how they've led long, satisfying marriages and partnerships. Lo and behold, those older folks believe sexual attraction is a crucial part of any relationship. Some of these "experts" have been married 70 years. So listen to their top tips for keeping it fresh.

30 Lessons for Loving: Advice from the Wisest Americans on Love, Relationships, and Marriage by Karl Pillemer, $12.85, Amazon

"Don't let yourself go" sounds like antiquated advice, but the experts see good grooming as more than vanity. Self-care is sexy, after all: You'll remain appealing to your partner and to yourself if you eat well and maintain a level of physical fitness that works for you.

According to Sherri Grass, age 88, prioritizing her appearance absolutely benefitted her sex life: "Don't just settle down and say: 'Well I'm married now. He's mine; I don't have to worry about it.' Keep yourself the size you should be; don't let yourself get out of shape and all of that. That's not attractive to the other person. We followed that rule, and we have never had any sexual problems."

2. Remember That Size Does Matter — And Smaller Is Better

Minds out of the gutter! I'm talking gestures: tiny joyous ones like bringing candies or flowers, writing love notes, opening doors, or even boosting the music during a favorite song. Pilllemer observed, "there is nothing more effective in keeping a relationship warm, supportive, and fun than making a habit of doing small, positive things." The senior experts believe that in order to remain sexually attracted to your partner, you both must stay attuned to each other's efforts to shower one another with affection.

"There is one practical piece of advice I have given to my children," says expert Antoinette Waters, married 55 years. "And that's when you wake up in the morning, think, 'What can I do to make his or her day just a little happier?'"

It's no big secret that kids and careers often end up dulling lives, creating vast stretches of days when couples "forget to have fun." That's why the seniors emphasize the importance of surprising your partner from time to time: "Giving your spouse a pleasant surprise also conveys something special," according to Pillemer, "your knowledge of him or her."

Compliments are like verbal surprises: I never expect them and I react pretty awkwardly to them, but please keep them coming! After all, "the failure to give and receive positive feedback and compliments was one of the most common regrets of the elders ... For those elders who made a habit of complimenting their spouses, the payoff was a warm atmosphere of mutual appreciation."

Stop believing in the either/or nonsense that movies offer about how impossible it is for romantic partners to be friends (ahem, When Harry Met Sally). The experts agree that being best friends with your partner does not preclude you two from having a smokin' sex life. Lydia Wade, 73, observes, "'Be friends, like each other. I think it's hard when you're young and hot on one another to back off and say, "Do I like what is behind these hands ... ?" But that is the piece that doesn't wear out, that grows and deepens.'" Don't worry: Wade assures that "'the sexual aspect deepens, too, in its own way.'"

6. Know When To Seek Help

Pillimer expected the longterm couples he interviewed to be skeptical of marriage or sex counseling, but nothing could be further from the truth. Most of the seniors he spoke to (again, props to the couple that's been together for 70 years) believed some situations really benefited from outside help. It's not a secret that depression and other issues can put a damper on your libido. Don't be shy about communicating with your partner when either or both of you need help.

"Travel more!" says Debra Palmer, age 73. "Different circumstances change your way of thinking." And, if I may add, the scenery.

More like this
The Case For A Hard Launch Summer
By Morgan Sullivan
Are Gemini & Scorpio Compatible In A Relationship?
By Kristine Fellizar
15 Ways To Tell Someone Was Just Talking Behind Your Back
By Carolyn Steber
The Most Compatible Life Path Numbers, According To Numerologists
By Kristine Fellizar
Get Even More From Bustle — Sign Up For The Newsletter