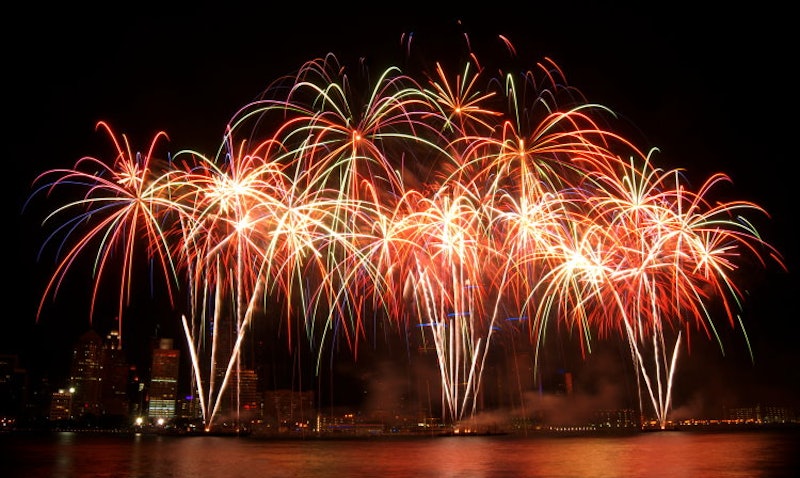 Everyone knows that fireworks are the very best part of the Fourth of July. Sure, the sunny weather, Grandma’s once-a-year-only ambrosia salad, and running around barefoot in the grass all day long aren’t too bad, either. But, really, all of those fireworks lighting up the nighttime sky definitely take the cake.

I mean, what isn’t to love? Fireworks are kaleidoscopic, explosively loud, a little bit dangerous, and pretty impossible to look away from. Some of the very best books share these same qualities — books like the ones listed here, for example. Like fireworks, these books are explosive: filled with wild, gutsy, and effervescent characters who aren’t afraid to announce themselves and make their stories known. These novels will take you around the world and back, to locales just as noisy and colorful as those little embers that light up a July 4 night. All of these novels will capture your undivided attention, and spark your imagination — and you won't want to put them down until you’ve turned the very last page.

So in honor of Independence Day, grab a few of these 15 explosively compelling titles, curl up on a cozy beach blanket, and read until the sun goes down and the fireworks start.

The Girl With the Dragon Tattoo by Stieg Larsson

Lisbeth Salander is not a girl to be trifled with in the novel The Girl with the Dragon Tattoo . The tatted, rife with disorder, computer hacking genius with a photographic memory makes an interesting candidate for the partner of destroyed journalist Mikael Blomkvist, in solving a long cold-cased, high-profile disappearance and possible murder mystery. Although their entire collaboration endeavors to revive Mikael’s career, Lisbeth is definitely the badass-for-justice hero of this story.

It’s hard to believe that Gillian Flynn could write anything more nail-bitingly suspenseful than the infamous Gone Girl , but her novel Dark Places , written three years before we all couldn’t get Evil Amy out of our heads, just might be that book. It tells the story of Libby Day, a woman who survived the massacre of her family when she was just a young girl, and who provided the evidence that convicted her older brother, Ben, of the crime. As an adult, with her brother still in prison, Libby begins wondering if she’s actually been wrong all along.

Pulitzer Prize winning novel The Goldfinch tells the story of Theo Decker, a teenage boy who survived the Metropolitan Museum of Art terrorist attack that killed his mother right in front of his eyes. In the middle of all the confusion and horror, Theo steals his mother’s favorite painting, The Goldfinch, off the wall of the museum, and flees the scene — an impulse that will affect the rest of his life in ways he couldn’t have imagined.

Anthony Doerr’s World War II-era All the Light We Cannot See is something of a quiet storm of a novel, explosive in its intensity of language and scene. When Marie-Laure LeBlanc becomes blind at the age of 6, her widowed father does everything he can to make sure she grows up to be as self-sufficient and educated as possible. Then, when the Nazis invade France, Marie-Laure’s father is entrusted with protecting one of the country’s most valuable relics, and they must flee their home.

The Book of Night Women by Marlon James

The Book of Night Women tells the story of Lilith, a slave on a Jamaican sugar plantation who is said to have been born with “dark powers.” When the women who toil on the plantation alongside Lilith decide to put their long-plotted slave revolt into action, they call on her to use her dark powers to help them succeed. But Lilith, who has secretly fallen in love with the plantation master, finds herself in the impossible position of choosing between love and loyalty.

I Know This Much is True by Wally Lamb

In I Know This Much is True , Dominick and Thomas Birdsey are identical twins, but Thomas suffers from paranoid schizophrenia, and one afternoon, while experiencing a severe episode of his disease, he enters a public library and cuts off his own hand. What follows is an explosion of deep-seated confusions, resentments, misunderstandings, injustices, and a great deal of unconditional love between these two brothers, who are doing their best to manage their lives in the only way they know how.

The Kite Runner by Khaled Hosseini

Growing up in Soviet-era Afghanistan, Amir and Hassan are best friends — even though Hassan is Amir’s father’s servant, which makes them, socially, worlds apart. When a horrifying act of violence is committed against Hassan, and Amir fails to prevent it, their relationship changes forever. The Kite Runner is a story filled with tension and politics, family and class struggle, and the kind of unbearable guilt that can last an entire lifetime.

Aristotle and Dante Discover the Secrets of the Universe tells the coming-of-age story of two Mexican-American teenage boys. At first it seems like Aristotle and Dante have absolutely nothing in common — one has a father dealing with PTSD, and brother in prison, the other is confident, and a little bohemian, seeming almost too comfortable in his own skin. But when Dante offers to teach Aristotle how to swim, what emerges is a friendship unlike any either of the boys have experienced before — one that challenges the boundaries of love, and has the power to change the people they are forever.

The Lovely Bones by Alice Sebold

When Susie Salmon is raped and murdered, her family is thrown into a world of grief and anger. Told through the perspective of Susie while looking down from heaven, The Lovely Bones takes readers on the Salmon family’s journey, as they grapple with not knowing exactly what happened to Susie, nor knowing who is responsible for the crime. This novel is about Susie’s parents relentless search for answers, Susie’s own inability to let go of her life on earth just yet, and Susie’s younger sister Lindsey’s own coming-of-age experience, understanding that she is growing older than her oldest sister ever got to be.

When Rosemary and Guy Woodhouse move into a New York City apartment known for its connections to the occult, and rumored to have a history filled with witchcraft and murder, they’re too preoccupied with their own troubles — Guy is an out-of-work actor and Rosemary wants to have children — to bother with the building’s haunting reputation. But Rosemary’s Baby suddenly takes an eerie turn for the worse, just as the couple seems to achieve the things they’ve always wanted.

The Poisonwood Bible by Barbara Kingsolver

This hefty novel takes readers deep into the heart of the African continent, circa 1959. The Poisonwood Bible tells the story of an evangelical Baptist family who has move to the Belgium-colonized Congo on a mission with their church. Relocating completely to a landscape harsher than they could have imagined, the Price family encounters disaster and destruction at every turn. Over the 30 years that this novel spans, they fall apart and rebuild, time and time again.

Readers will fall in love with the brilliant, adventurous, heartbreaking Oskar Schell, a 9-year-old boy who dives head-first into a mysterious treasure hunt, after his father is killed on September 11. Extremely Loud and Incredibly Close takes readers across New York City and back, as Oskar follows one clue after another, in hopes of, somehow, journeying closer to the father he's lost.

One Flew Over the Cuckoo's Nest by Ken Kesey

This novel illustrates the underbelly of the tie-dyed 1960s, as the rough-and-tumble Randle Patrick McMurphy takes readers on a tour of America’s mental hospitals, and some of the cringeworthy goings on that take place between the patients and their healthcare providers. Randle’s arch-enemy comes in the form of Nurse Ratched, with whom he engages in a to-the-death power struggle. One Flew Over the Cuckoo’s Nest is a wild, disturbing, and ultimately infuriating novel that presents a different side of America’s decade of peace and love.

Jesus’ Son is a collection of short stories, all told by the same, unnamed narrator, who frequents the most unsavory of locales. Filled with thieves and prostitutes, adulterers and drug addicts, Denis Johnson’s characters encounter bizarre, transforming, and unforgettable moments that have the potential to change their lives — but never seem to go all the way. The in-your-face imagery of this collection alone is worth picking up the book.

Saleem Sinai is one of 1,001 children born at midnight at the very start of the first day of India’s independence. Each of the children in Midnight’s Children is attributed with mystical gifts, and all are telepathically linked to each other. But, as the adage goes, with great power comes great responsibility, and Saleem struggles to manage the blessings and pitfalls of being born “special."