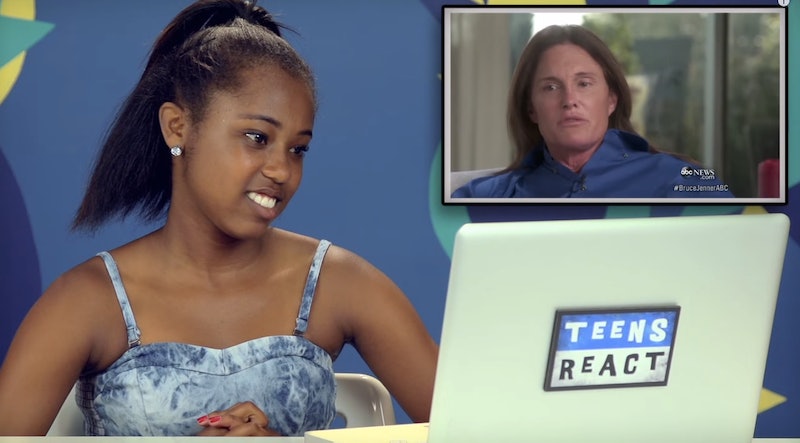 How did you react when you found out about Caitlyn Jenner? Given that you're a Bustle reader (you're reading this right now, aren't you?) you probably were intrigued, understanding, and excited. But obviously we still live in a world in which bigoted people with ass backwards opinions still exist, so not everyone was as humbly accepting and empathetic as you or I were. What's most comforting to see, despite all the negativity in the world, is the way in which today's teenagers react to Caitlyn Jenner. It truly gives hope for future generations, and hopefully an end to gender stereotypes and related prejudices.

While some of the teens are confused about which gender pronouns to use (we admittedly needed a lesson too!), the best part is their confusion upon hearing she used to be an athlete, and not just the "Bruce Jenner" of reality TV fame. Ah, kids. These ones were probably all born in the late '90s and early '00s, which is the most terrifying sentence I have ever written (that cognizant adults were born in the '90s is wild to me, who was born in the 80s.)

Straight off the bat, this kid calls Caitlyn "her" without hesitation. I'm not going to lie, that bought a little tear to my eye.

All the kids express a deep empathy at what Caitlyn's life must have been like, living a lie.

They're all also incredulous that people exist who think Caitlyn Jenner is transitioning for "attention".

The teenagers are also surprised at the reality of discrimination that transgender people face, which is actually kind of beautifully innocent, that people on this planet exist who believe that the world is better than it really is.

All the teenagers are also willing to think critically about the way Bruce's media exposure will effect the LGBTQ community. They question the Vanity Fair cover and how much good it will do for non-celebrity transgender people, and that ability to think critically while being open-minded, empathetic and accepting is something we could all learn from. And while some of the teens believe you are the gender you're born with, they ALL believe, unequivocally, that people who want to change gender should do whatever they want to do to make themselves happy, free of prejudice. Every teen, no matter their personal opinion on what transgender means, staunchly stands by a person's right to live their life as they please. I think that if everyone, even the prejudiced, had their prejudices but accepted that the right to individual happiness is paramount, we might all be in a much better position.

Watch the whole video below, and listen to teenagers be wiser than a lot of adults: