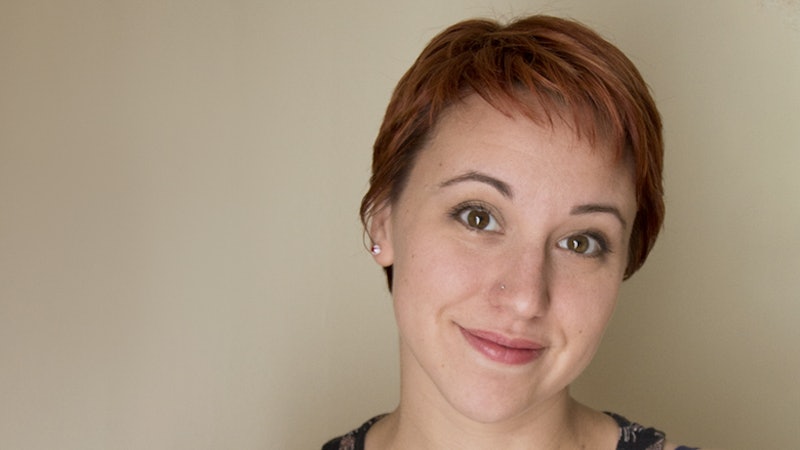 Like many women, I have, for the majority of my life, associated my femininity pretty predominantly with a singular aspect of my physical appearance (for some women it's breasts, for others it's a booty, lips, or eyes). For me, that aspect to which I attributed my womanly beauty was my hair, and recently, when I went from long hair to a pixie cut, I came face to face with a change in perception. That change, however, did not come easily. As I first looked in the mirror after watching 16 plus inches of my hair tumble down around me, all I could process was how much I thought I resembled a boy.

It may not be necessary, but I will take a moment to clarify that I never saw long hair as a specifically feminine attribute on others, just myself. Some of my closest male family members have long hair, and are unquestionably masculine-presenting. Conversely, I've long considered Audrey Hepburn one of the more traditionally feminine beauties of the past century, and she transitioned from long locks to short with the best of 'em.

Nonetheless, when I first had my tresses chopped, memories of my past hair glory haunted me. You see, growing up, I was tall, and a bit gangly. Even after puberty hit, turning my friends and I into budding young women, I was all elbows and knees, and had few of the curves genetics suggested I should be gaining from my momma. Those curves came eventually, but they took their time, and in the meantime, I hung my identity on my hair. Over the course of high school, my hair went from shoulder length to more than halfway down my back, and became a strange, silly sort of personal pride. So, staring in the mirror, looking at my newly shorn mane, I discovered myself distanced from the personal identity I had carried for so many years.

Sometimes, self-reassessment can be genuinely cathartic though, which is partially why I chose to make such a drastic change in my appearance. Often, it seems, when we undergo major life changes, we change some aspect of our physical appearance. And our psyche is in a delicately balanced dance with the tangible world around us, so it obviously goes to follow that for most of us, when we undergo or make a significant physical or stylistic change, our mind changes a bit, too. Personally, I like to shake it up every once and a while in terms of my appearance. I find that doing so allows me to confront beliefs I may not have realized I held, and gain a greater understanding of who I am (and have greater empathy for those around me).

Of course, these little style experiments aren't always easy on my self-esteem, at least not initially. In the case of sporting a pixie cut, my self-esteem took a rather severe blow. For the first few days, I seldom left my home (this, of course, is surprisingly easy when you work from home), and when I did, I was acutely aware of other people's perceptions of my appearance.

In particular, my heart grew a bit heavy when a passing vehicle slowed down specifically so that the passenger could have a better view of me as they passed. What their intentions really were, I guess I'll never know, but in the moment, it seemed the only possibility was that they were unable to tell if I was a woman or a boy. Of course, I waved and smiled enthusiastically as they pulled away (knowing full well that many people in the Midwest are still a bit reserved, and not holding it against them), but the experience was still a bit unnerving.

Even more unexpected, however, was the outpouring of affection and support for my new hairstyle that greeted me upon sharing the news on social media. Thus, marking the high in the emotional roller coaster that my beauty identity has been on of late (a ride many women who have significantly changed their appearance in some way will be able to relate to). Because no matter how independently minded we might consider ourselves, that general consensus does have a way of sneaking in and affecting our psyche.

I'm grateful that in this instance, the effect was a positive one. And at the same time, I have the utmost empathy for the men and women out there who have made great changes for reasons relating to style, health, or gender association, because that general consensus can be equally tumultuous. Which is why I am particularly glad that the body positive movement has gained such momentum, and that highly influential celebrities are discussing topics the way Miley Cyrus is talking about gender neutrality and Ruby Rose is championing gender fluidity.

Faced with the knowledge that many of my friends and family members found my new, decidedly less traditionally feminine hairstyle stunning, stating that I was a "total bombshell" and that I was "brave and beautiful," (whether or not they were just being kind), I had to reassess my definition of my femininity.

The way I identify with being womanly isn't relegated to my hair anymore, or to those curves that eventually came along. It isn't in my breasts, or my uterus, or any other reproductive organ — since I haven't had children of my own, and I've known many women without kids who are still, undoubtedly feminine. The notion of being feminine, womanly, or beautiful, goes deeper than physical attributes, style choices, or makeup. Still, many Americans cling to certain physical attributes when identifying the sexes, and when identifying with themselves.

And while I've known intrinsically for most of my life that femininity comes from some je ne sais quoi, cutting my hair short (really short) made me face that reality head on. Although I am cisgender and I identify as a woman, I have great empathy for the women who find themselves undergoing major physical change and defending their sense of femininity against the attitudes of the world.

Beauty, like femininity, flows from a wellspring within. We may change the way we portray it physically (either by choice, or necessity), but as long as we keep connected to that internal source of what makes us shine, nothing will detract from our unique beauty.