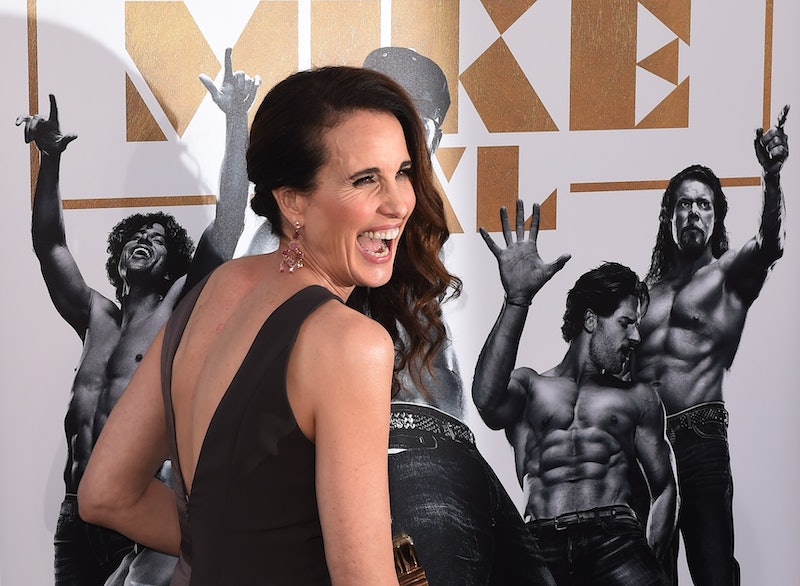 I know this is potentially blasphemous territory I’m walking into here, but hear me out: Have you seen the women starring in Magic Mike XXL ? They’re some seriously legit ladies with even more legit acting chops. I didn’t think that anything could top the shirtless dudes and endless dick jokes that the trailer promises, but I’m going to go out on a limb and say it: these actresses in the Magic Mike sequel have me more excited for the film than the guys in g-strings.

And if you only knew how much I love guys in g-strings, you would know that my excitement is that intense and that genuine for these women and their bound-to-be-awesome characters.

Because aside from the ripped and bare-chested boy toys who lead the cast, the film, which comes out July 1, also stars Elizabeth Banks, Jada Pinkett Smith, and Andi MacDowell. I mean, can we all just stop and bow down to the ladies, please? Seriously.

If I could invite three women to get rowdy with in a strip club, it would totally be these three. (And Amy Schumer, of course, but beggars can’t be choosers.) But the fact that the film features these amazing and iconic women is not the only thing to get excited about. Because all of the women are cast as characters who are not only incredibly nuanced but total bosses. Like, literally. MacDowell plays a foul-mouthed and flirty mother; Pinkett Smith plays a brothel-madam-type character; and Banks plays a convention manager. In fact, Pinkett Smith is such a boss, that the role was originally written for a dude and she waltzed in and nabbed it anyway. A movie about a bunch of powerful women and half-naked men? SIGN ME UP.

Plus, if the second movie is anything like the first — fingers crossed — it’s going to be so much more than just naked dudes dancing on a stage. The writing for the first Magic Mike was incredible, the cinematography stunning, and each of the characters saw their own heartbreaking personal struggles and development. Because — like I’ve been saying to all of the men in the world to try to convince them to see this movie — this franchise is about so much more than just dick jokes and rock-hard abs, even though it is (thankfully) also very much about those things. And with the sequel chock-full of powerful women playing a wider variety of characters other than usual super hot, super young things, you know the second round won’t disappoint in complexity and straight up awesomeness.

So you can go see Magic Mike XXL for the shirtless Channing Tatum all you want, but I’ll be going for the ladiezzz. (OK, fine. The ladiezzz AND the shirtless Tatum. Best of both worlds!)

More like this
Why The '365 Days' Sex Scenes Are Good, Even If The Movies Aren’t
By Arya Roshanian
Sandra Bullock, Girlboss Extraordinaire
By Matt Harkins & Viviana Olen
Long Live Bennifer!
By Allie Jones
What Does Doctor Strange’s Third Eye Mean?
By Arya Roshanian
Get Even More From Bustle — Sign Up For The Newsletter