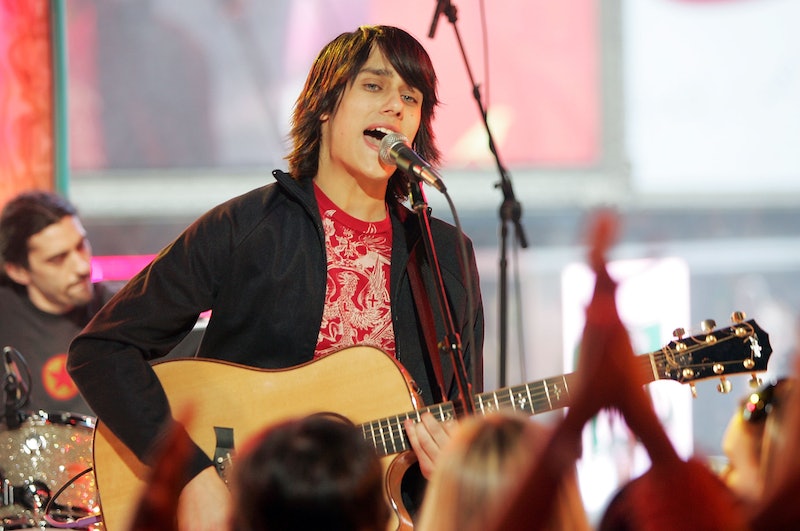 Is there an appropriate reaction upon discovering that Teddy Geiger co-wrote One Direction and Shawn Mendes songs? Because an average bleary-eyed morning for me turned into a full-on WHAT THE WHAT freakout as soon as my brain processed this veritable goldmine of information. Let me break it down for you: Teddy Geiger (2006 heartthrob/singer of "These Walls" and "For You I Will"/object of my friend Kim's affection) has written hits for 1D, Shawn Mendes, and more popular musical acts and EVERYONE NEEDS TO BE TALKING ABOUT THIS.

Let's rewind: The year was 2006 and pre-Bieber swoop-haired Teddy Geiger was on top of the world with his Gavin DeGraw/John Mayer-esque tracks ("These Walls" was my jam) and debut album Underage Thinking. Since then, he's acted sporadically and released his sophomore album in 2013 — but, for all intents and purposes, has mostly been under the radar. That is, if "under the radar" means "behind the scenes," co-writing and co-producing Shawn Mendes' addictive new single "Stitches" and One Direction's rock anthems "Where Do Broken Hearts Go" and "Little Black Dress." Like, if I could write this entire post in all caps I would BECAUSE THAT'S HOW AMAZING THIS IS. For you I will, Teddy Geiger. FOR YOU I WILL.

In all seriousness, there I was, just casually jamming away to "Stitches" as one does at approximately 9:37 a.m. on a Monday, when I decided to look up the lyrics to the song because it is my ish. The ever-accurate AZLyrics informed me that Teddy Geiger wrote "Stitches," which I initially read as "Ryan Tedder" because at this point I hadn't even eaten breakfast yet. As soon as my brain unscrambled itself I quickly threw Geiger's name into Google, only to discover that he had also penned tracks for One Direction ("Where Do Broken Hearts Go" = easily one of the best songs on Four), as well as Tiesto and Icona Pop. In fact, that Tiesto single "Love & Run" also features Geiger's vocals because that's just how he rolls.

Despite the fact that these major freaking accomplishments have relatively gone unnoticed by the general public, I think they warrant way more publicity. Not only is Teddy Geiger a talented musician with his own claim to fame (2006 nostalgia at its finest, people), he clearly found his niche in writing songs for other A-list artists. And it's not like "Stitches" or "Where Do Broken Hearts Go" are just filler tracks, either: "Stitches" is currently Mendes' new single (and his first U.S. airplay hit) and "Where Do Broken Hearts Go" is an anthemic fan favorite on 1D's triple-platinum Four. Of course, there's also the argument that Geiger is totally cool with being more behind-the-scenes, but I think the world should at least be acknowledging the fact that he's co-written and co-produced these totally kickass new songs for a younger generation of artists.

And so, to end what is arguably my greatest discover in all of 2015, I will leave you with Teddy Geiger's version of "Little Black Dress." You're welcome.