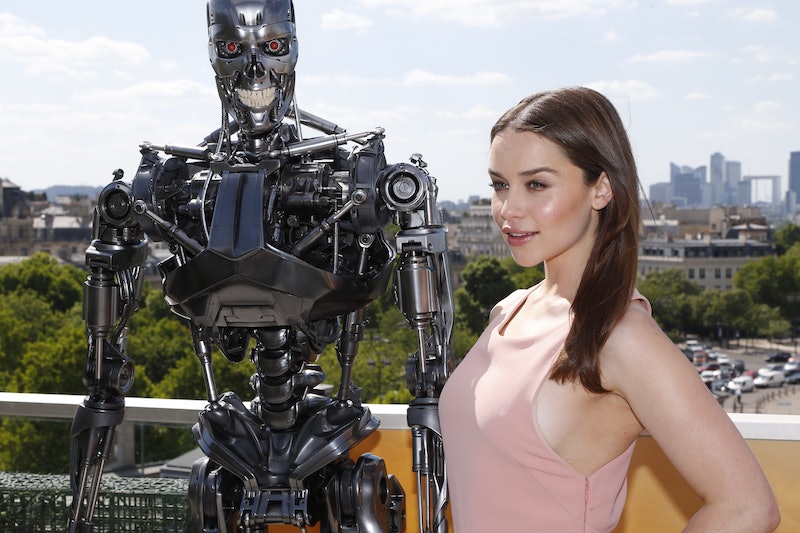 Sarah Connor has lived through four iterations of Terminator films, and on Wednesday, July 1, she'll be reborn once again. This time, the iconic character is played by Game of Thrones' star Emilia Clarke, who will attempt to save humanity from a future filled with human-killing machines we know as terminators. But from her first appearance in the 1984 The Terminator (played by Linda Hamilton), to 2015's Terminator Genisys , the character has evolved along side the terminators themselves. Dana Goldberg, producer on the latest film, recognizes this transition. "In Terminator, Sarah is a meek waitress — an innocent — whose life is broadsided by the machines. In T2, the responsibility Sarah has to protect her son and therefore the human race, has driven her to the brink of insanity. She is a trained warrior who will stop at nothing to defeat the machines," Goldberg says.

"The Sarah Connor of Genisys is a true blend of strength and vulnerability. Just like Emilia herself. In this chapter, Sarah has an idyllic life until age nine when her parents are killed in front of her. A machine shows up to say that he will protect her and never let anyone hurt her," the producer explains, referencing Arnold Schwarzenegger's Guardian character. "He also tells her what her life is going to look like. He tells her that her fate has already been determined and she has no choice in the matter. Much like any girl told this by a father figure, she listens, but she also wants to rebel, and believes that she can make the choice not to follow that destiny."

As a producer, Goldberg has worked on some of the biggest action films to come out over the past few years: Star Trek Into Darkness, World War Z, Jack Reacher... and the list goes on. "The biggest challenge for me is giving my job the level of focus and attention it requires while balancing my life outside of the office with my wife and child. It takes calculation, planning and a lot of support from family and colleagues," she says.

According to a 2014 study, women made up just 23 percent of film producers that year, making it one of the "friendliest" behind-the-scenes roles for females overall, with writers coming in at 11 percent, female directors coming in at 7 percent, and cinematographers at a dismal 5 percent. But Goldberg isn't fazed by these statistics. "I've been fortunate to have been judged and appreciated over time for the work I¹ve done and the things I¹ve accomplished, without consideration for my gender," she says. "I continue to extend the same mentality to everyone I work with: at the end of the day, the work speaks for itself and very little else matters."

Her impression of the industry extends to her thoughts about the action-heavy Terminator franchise. "I am a big fan of action films and don’t believe these films only cater to males," she says. "Each has storylines and relationships that make them more layered than just a film with bells and whistles... which is why I think they appeal to more than just a male audience."

"At its core , [it's] an entertaining story with a strong focus on the challenges of technology-driven modern life. Also, at the heart of this film is the story of a dysfunctional family... And who can't relate to that?"