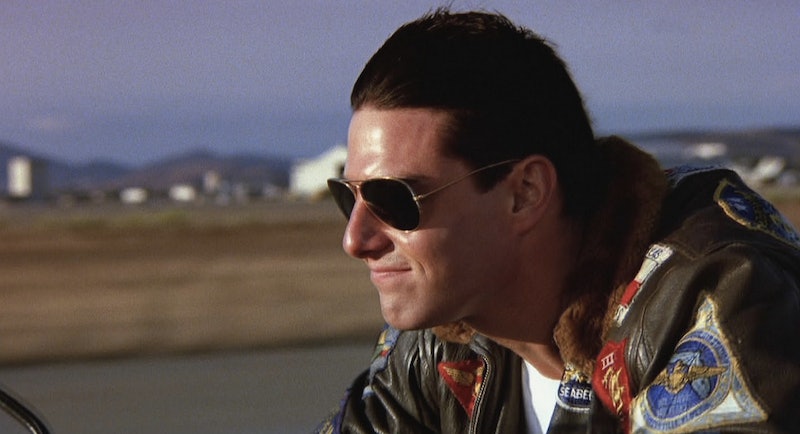 It seems like the only word right now in Hollywood is "sequel," and you best believe where there's a sequel, there's Tom Cruise. Nope, it's not another impossible mission, it's another Top Gun, being made nearly thirty years after the 1986 original. Skydance executives David Ellison and Dana Goldberg told Collider that after being rumored for five long years, Top Gun 2 is finally taking off. Though it had a lukewarm reception at the box office, Top Gun became a cult classic over the last three decades, even for those that haven't even seen it. If you've ever done a windmill high-low five, you're paying homage to Maverick and Goose (Navy pilot and a very young Tom Cruise and his partner in crime-fighting Anthony Edwards) after they agree they both have a need — a need for speed.

With its dynamite soundtrack — including golden '80s hits like "Danger Zone" by Kenny Loggins (that's right; Sterling Archer's favorite song was first a smash because of Cruise as a fighter pilot) — the film's badass dogfighting scenes that have miraculously stood the test of time. (Even though the movie was filmed long before an era of film when James Cameron literally invented a new kind of camera for Avatar, it's still pretty spectacular.) And the movie's Ultimate Bromance between Maverick and Goose gives Top Gun a special place in the history of cult films, embodying the good-natured cheesiness of the 1980s. But what about this new version? Here's what we know so far:

Thankfully, the second Top Gun won't be trying to remake the original, because that would be a fool's errand — it's going to be a traditional sequel, set in present-day. David Ellison told Collider that writer Justin Marks "has a phenomenal take to really update that world for what fighter pilots in the Navy has turned into today." Not to get TOO serious, but it will be interesting to see what those fighter pilots are up to thirty years later after many, many post-Cold War wars.

2. "Maverick Will Be Playing Maverick"

Five years ago, when this idea began swirling around in producer David Ellison's brain, he told Collider that Tom Cruise would be playing a small role in whatever shape Top Gun 2 took. But when he spoke to Collider, he all but confirmed that Tom would be at the top of the cast list, reprising his role as Maverick as the movie's star: "There is an amazing role for Maverick in the movie and there is no Top Gun without Maverick, and it is going to be Maverick playing Maverick." Say Maverick one more time.

3. It's Gonna Be Larger Than Life

Ellison is taking advantage of the technology of the times and shooting Top Gun 2 in IMAX and 3D. Considering that the original film's fight scenes are still incredible to watch even though they were only shot in lowly 2D. It may be advisable to take a dramamine before seeing the sequel.

4. There Will Be Real Stunts

Because apparently Cruise is a purist when it comes to stunt-shooting. As Ellison said, "As everyone knows with Tom, he is 100 percent going to want to be in those airplanes shooting it practically." Tom Cruise: he'd rather do it himself!

5. There Will Be Drones

You heard right. Drones are everywhere right now, literally, figuretively, politically, pop culturally. And ESPECIALLY in the Navy. Rolling Stone reports that Top Gun 2 will focus on the last actual pilots in the Navy and how they're dealing with the changing technology of warfare: "It is very much a world we live in today where it’s drone technology and fifth generation fighters are really what the United States Navy is calling the last man-made fighter that we’re actually going to produce so it’s really exploring the end of an era of dogfighting and fighter pilots." Aw, that sounds kind of sad! I thought Top Gun was supposed to be a feel-good, more than slightly homoerotic patriotic adrenaline rush...

6. Ellison Is The Right Man For The Job

Even though there's always skepticism when sequels are announced, Ellison really does seem like the best man to take on this project. He literally started his production company, Skydance, because he was inspired by the 1986 original "to become an aerobatic pilot and instrument-rated commercial pilot, followed by a stint at USC’s film school." That's some serious commitment, and it looks like Top Gun 2 is in the good hands of an actual pilot.

Obviously, questions abound: Will Val Kilmer return as Iceman? What about other members of the original cast? How will the soundtrack live up to the original? Just how MANY windmill high fives will we see on the screen? Will there be more karaoke? We have a need... a need for answers. But this rundown will have to do for now.

More like this
Tom Cruise Gives His Honest Review Of Lady Gaga’s New Song For 'Top Gun: Maverick'
By Hugh McIntyre
Elizabeth Olsen's Chris Evans Friendship Update Was Accidentally Hilarious
By Grace Wehniainen
Wait, Did Wanda Die In 'Doctor Strange And The Multiverse Of Madness'?
By Arya Roshanian
Hayden Panettiere Will Return For 'Scream 6': "We F*cking Won, Scream Fam"
By Jack Irvin and Jake Viswanath
Get Even More From Bustle — Sign Up For The Newsletter