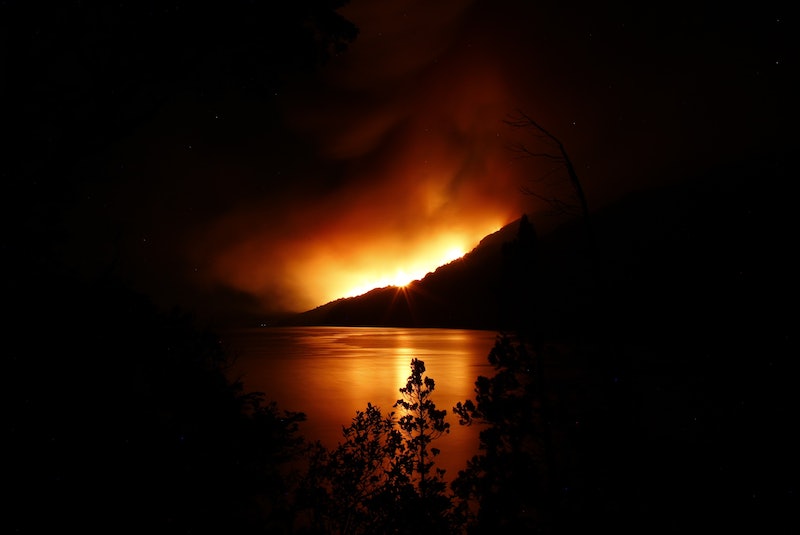 A massive wildfire known as the Sleepy Hollow fire blazed through Wenatchee, Washington, Sunday afternoon, burning roughly 3,000 acres of grassland, according to the Washington State Department of Natural Resources. Local officials have also confirmed that at least 24 structures in Wenatchee, located about 150 miles southeast of Seattle, have been destroyed. High winds took the fire closer to town overnight, and the area is also in the middle of a heatwave, which have made conditions worse. On Monday, hundreds of residents in the area have been advised by emergency management teams to either evacuate or shelter in place as firefighters struggle to tame the blaze.

Washington Gov. Jay Inslee released a statement about the fires on Monday:

My thoughts and prayers are with Wenatchee this morning. Yet again, our state is experiencing a catastrophic wildfire that has displaced families and shut down businesses, as well as risked the lives of our firefighters and emergency personnel. I'm having ongoing conversations with our state emergency management officials, and urge people in the impacted area to follow the advice of emergency personnel. We recognized early that this summer would bring with it another unprecedented fire season. That's why last week we proactively declared a state of emergency and statewide burn ban to last through the summer. This allows state agencies to use resources necessary to respond to the fires and assist those who have been affected.

Chelan County Emergency Management issued several level 2 and level 3 alerts for neighborhoods in the area on Monday, via the division's Facebook page. Level 2 alerts advise residents to be prepared to leave at a moment's notice, while level 3 requests residents to leave immediately because of close danger. Shelters for residents and their small pets have been set up, and the town is preparing for overnight accommodations.